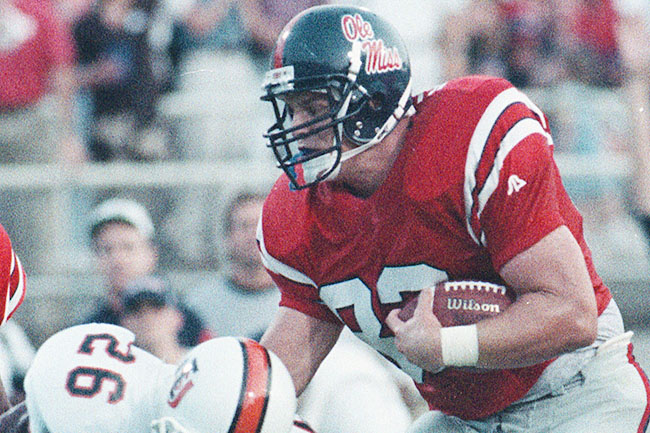 Mississippi tight end Kris Mangum (82) is upended by Idaho State defensive back Joe Barnes (26) following a fourth down catch that kept a touchdown drive alive during the second quarter of their game at Vaught-Hemingway Stadium in Oxford, Miss. Saturday, Aug. 31, 1996. (AP Photo/Bruce Newman)

Kris Mangum, who starred at tight end for Ole Miss from 1994-96, is part of the 2016 Southeastern Conference Legends class that will be honored during the weekend of the SEC Championship Game in December.

Each year, the SEC selects 14 former football standouts — one from each school — to be a part of the class. The annual SEC Legends Dinner will be held Dec. 2 at the Hyatt Regency in Atlanta while the class will also be honored before the SEC Championship Game on Dec. 3 at the Georgia Dome.

Mangum was a two-time All-SEC selection during his time at Ole Miss and finished his three-year career ranked second in receptions (74) and third in receiving yards (729) among tight ends in Ole Miss history, averaging 9.9 yards per catch. After being named a first-team All-American in 1996, a year in which he served as a team captain, Mangum spent 10 years in the NFL with the Carolina Panthers before retiring following the 2006 season as the fifth-leading receiver in franchise history with 151 receptions for 1,424 yards and nine touchdowns.

Mangum, who began his career at Alabama before transferring after the 1992 season, is a native of Magee. He was inducted into the Ole Miss Athletics Hall of Fame in 2008.