The Hurricane Matthew 2016 forecast cone of uncertainty is shifting toward the United States East Coast, meaning Florida, South Carolina, Virginia, Washington, D.C. and New York City could be in danger in the coming days.

The latest Hurricane Matthew projected path forecast update shows Matthew is expected to cling closer to the I-95 corridor after it leaves Haiti, where it has been pounding the small country with devastating impact. In the coming days the eastern side of Florida will be in danger as well as the southern tip. It doesn’t appear a direct strike is in order for Florida but the forecast continues to move the storm closer to land so forecasts will have to be closely monitored.

“Forecast guidance began to trend Monday toward a closer pass of Matthew to the Southeast coast, from Florida to North Carolina,” according to weather.com.

“The reason for this is stronger high pressure aloft persisting over the western Atlantic and East Coast of the U.S. helping to trap Matthew closer to the coast.” 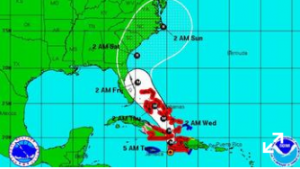 Hurricane Matthew roared into the southwestern coast of Haiti on Tuesday, threatening a largely rural corner of the impoverished country with devastating storm conditions as it headed north toward Cuba and the eastern coast of Florida.

The dangerous Category 4 storm made landfall around dawn on Haiti’s southern peninsula, where many people live along the coast in shacks of wood and corrugated steel that stand little chance of withstanding the force of the system’s maximum sustained winds of 145 mph (230 kph).

Matthew was also expected to bring 15-25 inches of rain, and up to 40 inches (100 centimeters) in isolated places, along with up to 10 feet (3 meters) of storm surge and battering waves, said Dennis Feltgen, a meteorologist and spokesman for the U.S. National Hurricane Center in Miami.

“They are getting everything a major hurricane can throw at them,” Feltgen said.

The storm was moving along the Windward Passage between Haiti and Jamaica, where it was also dumping heavy rain that caused flooding in parts of the country. It was headed for southeastern Cuba and then into the Bahamas.

The hurricane center said it would likely issue a tropical storm watch or hurricane watch for the Florida Keys or the Florida peninsula and that it could create dangerous beach conditions along the East Coast later in the week.

As dawn broke, people in the south coast tourist town of Port Salut described howling winds and big waves slamming the beaches and washing over the coastal road.

“The winds are making so many bad noises. We’re just doing our best to stay calm,” said Jenniflore Desrosiers early Tuesday as she huddled with her family in her fragile cinderblock home, which had sprung numerous leaks from pelting rain.

Haiti’s civil protection office said a number of south coast towns partially flooded overnight. Landslides and downed trees on roadways were preventing movement in numerous areas. The few places that were on the electrical grid had apparently lost power and cell phone service was spotty.

Haitian officials spent Monday trying to persuade shantytown residents to take advantage of shelters being set up. Some people took up the offers, but many refused, saying they feared their meager possessions might be stolen.

“If we lose our things we are not going to get them back!” said Toussaint Laine, an unemployed man who lives with his family in a shack in Tabarre, a suburb of Port-au-Prince, the capital.

Authorities also went door to door in the south coast cities of Les Cayes and Jeremie to make sure people were aware of the storm’s threats. At least 1,200 people were moved to shelters in churches and schools.

“We are continuing to mobilize teams in the south to move people away from dangerous areas,” said Marie Alta Jean-Baptiste, head of Haiti’s civil protection agency.

In an unregulated sprawl of shacks built on hillsides near the northern edge of the capital, some poor families did what they could to reinforce their tin-and-tarp home and hoped for the best.

“I know my house could easily blow away. All I can do is pray and then pray some more,” Ronlande Francois said by the tarp-walled shack where she lives with her unemployed husband and three children.

Haiti’s civil protection agency reported one death, a fisherman who drowned in rough water churned up by the storm. That raised Matthew’s death toll to at least three. One man died in Colombia and a teen was killed in St. Vincent and the Grenadines as the storm moved through the Caribbean.

Cuba’s government declared a hurricane alert for six eastern provinces and workers removed traffic lights from poles in the city of Santiago to keep them from falling when the storm hit.

At one point a Category 5 storm, and the region’s strongest hurricane since Felix in 2007, Matthew was expected to make landfall in Cuba about 50 miles (80 kilometers) east of the U.S. Navy base at Guantanamo Bay, where authorities flew out about 700 spouses and children of service members.