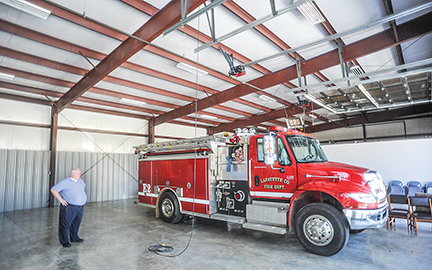 Local developer J.W. McCurdy has donated land to Lafayette County to be used for the future home of Fire Station No. 17 near Tuscan Hills and The Lakes subdivisions off Highway 6 East.

The Lafayette County Board of Supervisors accepted the donation Monday during their regular meeting.

McCurdy donated 1.46 acres of land to the county. County Attorney David O’Donnell said all that was left to finalize the donation was for McCurdy to sign off on the official documents giving the county the land.

Lafayette County Deputy Fire Chief Wes Anderson said there is currently no funding in place to build the new fire station. However, with the land now owned by the county, plans can move forward to seek funding options.

McCurdy said he donated the land because he felt it was the right thing to do for residents living in the area.

“The county has a gap in its fire insurance rating district for that part of the community,” he said. “This should also help everyone’s insurance premiums to go down.”

In March, Bill Gates, a resident in the Highlands subdivision asked the Board of Supervisors to create a fire district in the area.

In order for a fire district to be created, there must be a fire station within that district.

Fire districts are for insurance purposes. Those living in areas that are not part of a fire district still receive fire services from the Lafayette County Fire Department. Currently, that area is served by Station 2 on Highway 30, Station 5 in Yocona and Lafayette Springs and the Central Fire Station.

The board also approved Elliott & Britt to do design work on the future fire station.

“That way, once we get the funding in place, we’re ready to go,” Anderson said.

— Approved allowing Fieldstone Farms to file their subdivision plat in three phases. The first phase would be for 33 cottages.

— Tabled a request for site plan approval for Oxford Self Storage on Highway 6 until Oct. 17 until MDEQ signs off on the project’s storm water plan.

— Approved the preliminary site plan for Tuscan Hills Phase VII. The Planning Commission made a recommendation to approve the project but with a requirement to curb and gutter the road on County Road 409 in front of eight lots. The supervisors approved the plan but did not require the curb and gutter.