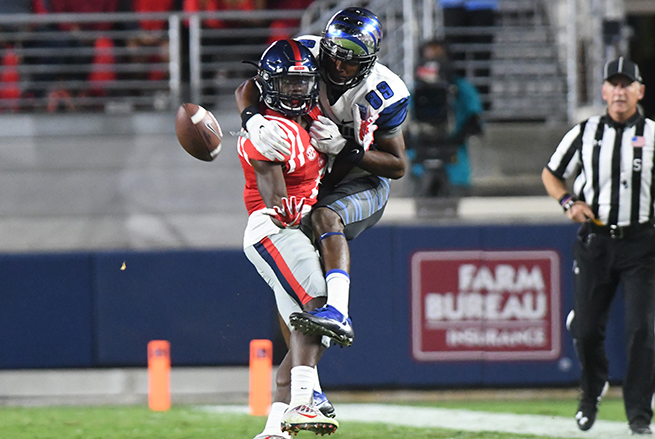 It’s not often a freshman who’s new to the college game is able to overtake a senior who’s been there and done that.

Jalen Julius is proving to be an exception.

Cornerback appeared to be the strength of Ole Miss’ young secondary at the start of the season with Ken Webster and Tony Bridges back as experienced starters, but it was Carlos Davis who got the start alongside Webster in the opener against Florida State. Once Webster went down with a season-ending knee injury early in that game, it was Julius, not Bridges, who replaced him.

Julius got his first career start against Wofford the following week and has made every start alongside Davis since, leaving Bridges, who started 11 games a season ago, as one of the first options off the bench. Julius has 12 tackles and a pass breakup.

Julius signed with the Rebels in 2015 out of West Orange High in Florida and redshirted last fall. It was a year he spent not only working to bulk up his 5-foot-10, 180-pound frame but also adjusting to defense full-time after lining up virtually everywhere in high school.

“(The redshirt year) helped me out, but at first, it was tough,” Julius said before the season. “But I realized I had to get stronger and focus on my technique because it was all new at the position.”

But coaches knew if anybody could make that transition a rather seamless one, it was the multi-faceted Julius, who played receiver and running back while also returning kicks during his high school days. Julius just had to get his effort to match his ability along the way.

“Sometimes (this spring) he would get winded and he would take a play off,” cornerbacks coach Jason Jones said. “He and I had a conversation at the end of spring in our post-spring evaluations, and I told him, ‘That’s the only thing that’s going to keep you off the field, if you can’t learn to play when you’re fatigued.’ He worked his tail off this summer with (strength) coach (Paul) Jackson doing extra, and he hadn’t done any of that in fall camp or up until now. He’s made tremendous strides.”

Said Julius, “It’s my second year fully at corner, so I feel more comfortable with my technique and everything. I’m going good.”

Julius “hasn’t arrived yet,” Freeze said, but he isn’t where he used to be.

But Julius can’t play every snap, meaning the Rebels need Bridges’ help at a position that’s already thin. Derrick Jones has moved over from offense while senior Kailo Moore and true freshman Jaylon Jones are also getting reps, but Bridges got his most extensive playing time of the season against Memphis and responded with three tackles and a pass breakup.

Julius is part of the youth movement in a secondary that’s also starting true freshman Myles Hartsfield and sophomore Zedrick Woods at safety. The group has had its share of growing pains as Ole Miss ranks 71st nationally in pass defense (234 yards allowed per game) but has only allowed two touchdowns through the air.