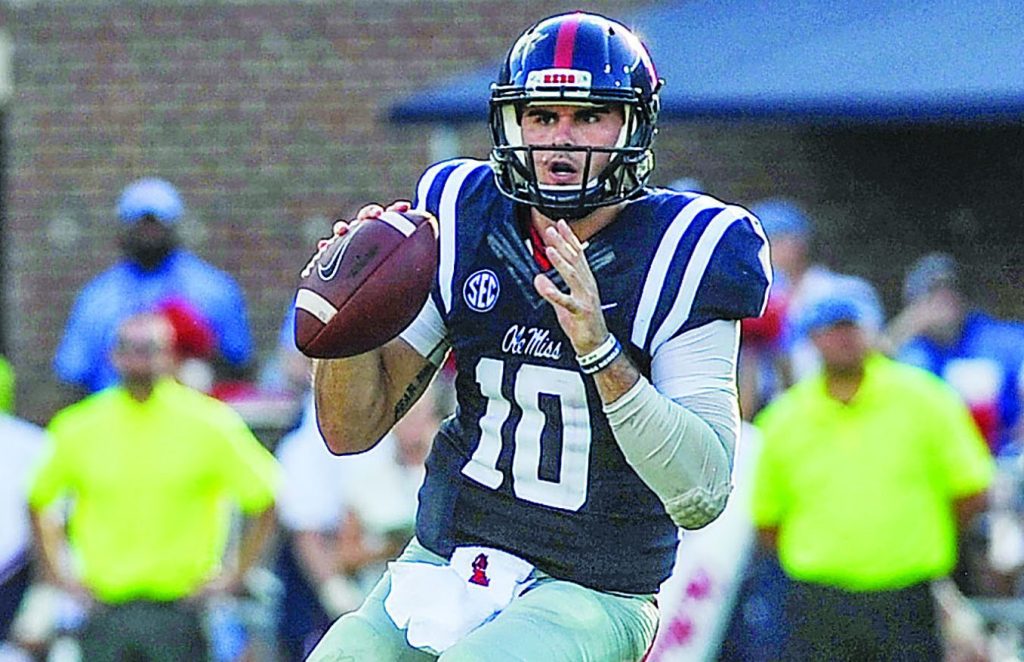 Chad Kelly can make every throw on a football field, but Ole Miss’ quarterback knows there are times he shouldn’t even think about it.

Yet he can’t always help himself.

“I’ve just got to keep on practicing that,” Kelly said. “That’s just who I am. I like to sling it around a little bit. Sometimes that’ll get the best of me, and the defense makes a good play.”

As the 14th-ranked Rebels work through their bye week before jumping back into Southeastern Conference play Oct. 15 at Arkansas, Kelly said the emphasis for him continues to be protecting the football, the lone hiccup in his performance this season.

Following up a year in which he became just the third player in SEC history to amass 4,000 total yards in a season, Kelly is completing more than 66 percent of his passes for 319.2 yards per game with 13 touchdown passes — one shy of Missouri’s Drew Locke for the SEC lead — for an offense that’s scored at least 34 points in all five games.

But Kelly is responsible for seven turnovers, six of those coming in losses to Florida State and Alabama. The 48-28 win over Memphis on Saturday is the only game Ole Miss (3-2) has won when its senior quarterback gives the ball up.

Kelly had seven straight quarters of turnover-free ball going into the fourth quarter against Memphis, finishing 30 of 44 for 361 yards. But instead of throwing the ball away when getting pressured early in the final quarter, Kelly floated a pass off his back foot for Damore’ea Stringfellow that was picked in the end zone — a takeaway Memphis used to cut the Rebels’ lead to two scores before Ole Miss eventually pulled away for good.

“The only thing (head coach Hugh Freeze) is not happy is with me throwing off my back foot in the red zone when we’re up 30 points,” Kelly said. “I just have to keep working.”

It’s not always that simple for Kelly, whose confidence in perhaps the SEC’s deepest and most talented receiving corps to make plays baits him into throwing the ball up even when he shouldn’t. Five different receivers have already caught at least 13 passes led by tight end Evan Engram, who leads the league in receiving yards (479).

Still, Kelly admitted sometimes living to see the next play should be his best play.

“That’s exactly it,” Kelly said. “I see those guys every single day make fantastic catches and do this and that. That’s where I get it in my head that, ‘Hey, they can make a play right here.’ But like I said, if it’s not there, throw it away.”