Will the Hurricane Matthew 2016 path take the storm on a destructive track across the U.S. East Coast?

The latest Hurricane Matthew forecast updates reveal that Florida, South Carolina and Virginia certainly may have plenty to tangle with as a strong Matthew skirts up the coastline in the coming days.

Matthew is expected to pound the East Coast with wind, rain and beach eroding surge and waves for the next three days. But the hurricane is not expected to make a direct strike in the latest Matthew 2016 forecast updates.

From accuweather.com: “Matthew will take a northwestern turn over the Bahamas on Wednesday and will continue on a northwesterly path that will bring the system very close to the Florida east coast on Friday and the South Carolina coast during Friday night, according to AccuWeather Hurricane Expert Dan Kottlowski.

“From Saturday to Sunday, a sharp turn toward the northeast is forecast with the center continuing to parallel the coast,” Kottlowski said.

The eye wall may brush the coast or remain just offshore.” 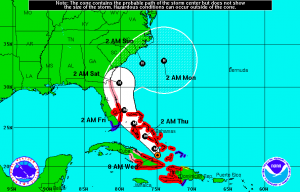 In Miami-Dade County, the state’s largest school district, officials say they’ll monitor the storm on Wednesday morning before making a decision on whether to cancel classes on Thursday and Friday. The county remains under a tropical storm warning.

From Broward County to the Space Coast — where hurricane warnings are in effect — officials have already closed schools for the rest of the week. Some school districts are sending students home early on Wednesday, and after school activities are canceled.

Districts in Daytona Beach and farther north announced on their websites that they’ll be monitoring the storm before deciding whether to cancel classes for the rest of the week.

Most colleges and universities in the warning areas also have canceled classes starting Wednesday evening.

A number of other closings have been announced. In Palm Beach County, the courthouse will close at 1 p.m. EDT on Wednesday and jury duty has been canceled. Most government offices also are closing early on Wednesday.

South Carolina Gov. Nikki Haley is about to make a final decision on evacuation orders.

Haley said Tuesday afternoon she planned to order the evacuation of 1 million people along the coast ahead of Hurricane Matthew so those leaving can do so safely.

Haley expects to announce her decision at 9 a.m. Wednesday based on the latest information about the storm. The latest projected path of the storm Wednesday morning had moved a bit farther away from the coast.

The governor said an evacuation order would take effect at 3 p.m. Wednesday.

State officials say lanes on major evacuation routes will be reversed so that all lanes head west. It would be the first major evacuation since Hurricane Floyd in 1999, when the governor at the time didn’t reverse the lanes and traffic clogged.

Forecasters say strong winds, heavy rains and a dangerous storm surge are starting to spread over the Bahamas as Hurricane Matthew approaches.

The U.S. National Hurricane Center in Miami said the powerful Category 3 hurricane was centered at 5 a.m. EDT Wednesday about 65 miles (110 kilometers) north-northwest of the eastern tip of Cuba. The eye was also located about 155 miles (250 kilometers) south-southeast of the Bahamas’ Long Island.

The storm is packing top sustained winds of 125 mph (205 kph) and is moving to the north at 10 mph (17 kph) with some strengthening is forecast in coming days. Forecasters say the hurricane will cross the Bahamas through Thursday and be very near Florida’s Atlantic coast by Thursday evening.

The U.S. National Hurricane Center in Miami says Matthew is currently a Category 3 hurricane packing winds of 125 mph (205 kph) and is centered about 35 miles (60 kilometers) north-northwest of the eastern tip of Cuba.

Matthew is moving toward the north at about 8 mph (13 kph) and a turn toward the north-northwest is expected later Wednesday. It is also about 80 miles (130 kilometers) west-southwest of the Bahamas’ Great Inagua Island.

The hurricane center says that Matthew will be moving across the Bahamas through Thursday and is expected to be very near Florida’s Atlantic coast by Thursday evening.

Forecasters say that while winds have decreased a bit, some fluctuations in Matthew’s intensity are expected but that it remains a powerful and dangerous storm.

The eye of Hurricane Matthew has moved off the northeastern coast of Cuba and forecasters have expanded the hurricane warning area in Florida.

The U.S. National Hurricane Center says the Category 4 storm’s maximum sustained winds have decreased to 130 mph (215 kph) but it is expected to maintain strength through at least Thursday night. Matthew is moving north at 8 mph (13 kph).

Forecasters expect Matthew to move through the Bahamas on Thursday and be very near Florida’s east coast by that evening.

The center upgraded hurricane watches from Golden Beach to Sebastian Inlet and for Lake Okeechobee to hurricane warnings. The hurricane watch area has been extended north to the Flagler-Volusia county line.