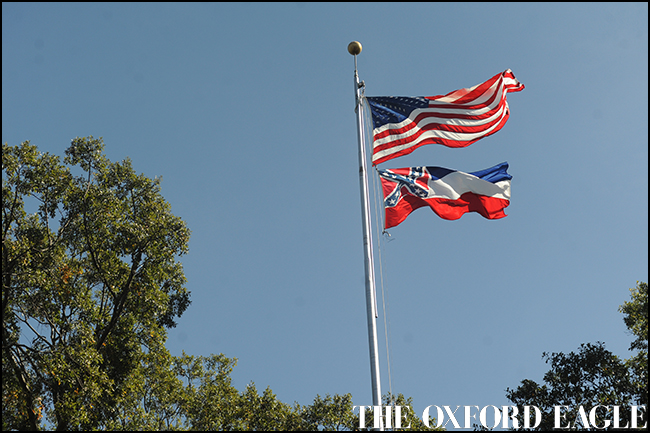 Days after video emerged of a University of Mississippi student being arrested at Vaught-Hemingway Stadium, the university is refuting social media rumors and national chatter that it was over the state flag.

Video of Dylan Wood’s arrest spread quickly across social media outlets after Saturday’s game against Memphis, along with conflicting reports as to why the arrest occurred.

A university press release says Woods “was initially contacted by stadium security because he was displaying a flag in the stands in violation of longstanding stadium policy that prohibits flags, banners, signs, umbrellas or other objects that may obstruct the view of other fans.

“Consistent with stadium policy, security officers instructed Wood to leave the stadium or to relinquish the flag.”

The university says Wood, who is underage, failed to comply with officers after being escorted to the concourse, at which time officers observed he was intoxicated and carrying a flask.

He was charged with failure to comply, public drunkenness and possession of alcohol by a minor.

The university issued the release after Breitbart News – a politically conservative news site – incorrectly reported Wood had been arrested for having a state flag.

“This was never a problem until Ole Miss stopped playing ‘Dixie,’” Wood told Breitbart, despite the fact the tune hasn’t been played in Vaught-Hemingway Stadium in two years and was removed entirely from the marching band’s game-day routine months ago.

In a Facebook post from Oct. 2, Ole Miss student Brian Powers said he watched the incident unfold, claiming Wood “was so hammered he fell down a couple of stairs when talking to the cop.”

Powers added many students around him also had state flags, but none of them were arrested.

The stadium policy outlawing sticks and large banners has been in effect since the late 1990s. However, the issue has been revived this year due to grassroots efforts carried out by flag supporters to reinstate the flag at public universities across the state.

Delta State is the only remaining public university flying the state flag.