The latest Hurricane Matthew path update reveals that Florida is likely take a direct hit from the massive storm and Georgia could get a heavy blow, too.

For some on the Florida east coast, damage could be significant — historic even. Matthew is the strongest hurricane to strike the U.S. in years.

So read closely for timing updates for preparation.

As evacuations ramp up and others hunker day, Floridians want to know: What time will Matthew hit Florida?

The latest Hurricane Matthew path updates and forecasts reveal that Matthew will likely hit Florida today, and forecasts show south Florida could have winds of up to 145 miles per hour — a massive storm. In other words, get prepared, South Florida — this storm is strengthening and is more significant than thought last night.

“Environmental conditions appear favorable for continued strengthening today and Matthew is expected to become an extremely dangerous category 4 hurricane while it moves over the northwestern Bahamas and approaches the east coast of Florida,” the National Hurricane Center said Thursday morning.

As for timing with Matthew 2016 Florida:

–Florida will begin to push at or near the Florida east coast north of Miami by late Thursday night/early Friday morning hours. Winds at impact could be 145 miles per hour, which would be one of the strongest storms to strike the U.S. in years.

–Matthew will rake up the Florida east coast, according to the latest forecast updates, and be near Melbourne and South of Jacksonville Friday afternoon and evening, likely still at hurricane strength.

“Matthew’s eyewall is likely to rake a sizable swath of Florida East Coast, and is probable to pass near enough to the coasts of Georgia and South Carolina to bring hurricane conditions to those areas as well,” reports weather.com.  “These may be the strongest winds experienced along the Florida east coast in decades.”

Here is the latest news updates on Hurricane Matthew 2016 and forecast path as a Florida strike seems apparent (all times local):

Forecasters say the first outer rain bands from Hurricane Matthew have already begun to approach Florida as the big storm crosses the Bahamas toward the state.

The storm is centered about 215 miles southeast of West Palm Beach, Florida and moving northwest toward the state at 12 mph. 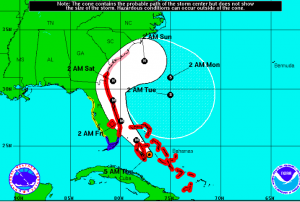 Authorities say a motorist in South Carolina was shot and wounded by deputies during an altercation over a Hurricane Matthew evacuation route.

Berkeley County Sheriff Duane Lewis tells local news outlets it happened about 5:30 p.m. Wednesday in Moncks Corner when a motorist came to a check point, knocked down some traffic cones and sped off.

The sheriff says when deputies finally caught up with the driver a few miles away he pointed a gun at deputies and started shooting. The sheriff says the deputies shot back, wounding the man who was taken to the hospital. His name and condition were not immediately released.

No deputies were wounded, but the sheriff says that four deputies have been placed on administrative leave.

State regulators are urging dam owners in South Carolina to begin reducing the water levels in their ponds and lakes.

The Department of Health and Environmental Control said Wednesday that water levels behind the dams should be reduced before rains come from Hurricane Matthew.

Dam failures one year ago caused and worsened flooding that hit central and coastal South Carolina last October. Some parts of the state got 20 inches of rain in one day last year.

Hurricane Matthew is not expected to bring that much rain to most sections in the date, but the state agency warms the rains could still cause problems with the dams.

State officials also are reminding owners of dams to notify those with dams farther downstream they are releasing water.

Officials at Florida’s major airports are monitoring conditions as Hurricane Matthew bears down on Florida.

Officials at Miami International Airport will continue monitoring the storm and warned of possible flight cancellations. On its website, officials noted that generally “airports don’t’ operate in sustained crosswinds that exceed 35 mph.”

The Palm Beach International Airport website doesn’t say when flights will be suspended, but asked travelers to stay away, noting that the airport is not intended for use as a shelter.

In Orlando airport officials are preparing for hurricane conditions. In a note on its website, officials at Orlando International Airport say they plan to being “reducing flights into Orlando and altering schedules starting Thursday, lasting through Friday.” They, too, advise travelers to get in contact with individual airlines for flight plans.

The Jacksonville International Airport website also advises travelers to check flight status with the airlines before heading to the airport.

With Hurricane Matthew approaching Florida, patients are being transferred from two waterfront hospitals and a nursing home near Daytona Beach to facilities away from the coast.

Halifax Health Medical Center, a public health system in Daytona Beach, plans to be fully staffed during the hurricane’s passage. Spokesman John Guthrie tells The Daytona Beach News-Journal (http://bit.ly/2d5oIg4) the hospital is ready to take care of any medical emergencies during the storm.

One of the area’s largest nursing homes, meanwhile, is relocating about 170 patients to five facilities in the area. Receptionist Sandy Longenecker at Ocean View Nursing & Rehabilitation Center in New Smyrna Beach told the newspaper the moves are being made before a bridge to the mainland would close to traffic.

Officials say some 3,000 people have already checked into shelters in Florida ahead of Hurricane Matthew’s approach.

The shelters are all in schools in areas where evacuations — either mandatory or voluntary — are underway. The Florida counties include Broward, Miami-Dade, Palm Beach, St. Lucie, Glades, Martin, Duval and Brevard.

Special needs shelters are designed to aid people with disabilities. Shelters are listed at floridadisaster.org.

The murder trial of a man accused of intentionally leaving his toddler son in a hot SUV to die is being put on hold as Hurricane Matthew heads toward the Georgia coast where the man’s being prosecuted.

Local news organizations report a judge said the trial of Justin Ross Harris would be in recess Thursday and Friday and resume Monday.

Prosecutors have said Harris intentionally killed his 22-month-old son, Cooper, by leaving him for hours in a vehicle parked outside the father’s workplace in Cobb County near Atlanta. Cooper’s lawyers say the death was accidental.

The trial was moved to Brunswick on the coast because of pretrial publicity.

Georgia Gov. Nathan Deal on Wednesday urged residents of several coastal counties, including the one where Brunswick is located, to evacuate.

Forecasters say Hurricane Matthew has gained new muscle over the Bahamas and they are also expanding the hurricane warning area further up the Southeast Atlantic seacoast from Florida into Georgia.

The U.S. National Hurricane Center in Miami says Matthew’s top sustained winds have risen from 115 mph (185 kph) to 125 mph (205 mph) in just a few hours early Thursday as the storm continues to batter the central Bahamas.

The center says it is extending a hurricane warning area already covering a large swath of Florida’s Atlantic coast further northward to Altamaha Sound, Georgia. It also says a newly expanded hurricane watch now extends from the Altamaha Sound up the coast to the South Santee River in South Carolina.

The center added in its 5 a.m. Thursday update that Matthew should gain further in intensity over the next day or so and is forecast to become a Category 4 storm as it approaches Florida’s Atlantic coast.

Matthew’s center is now about 255 miles (410 kilometers) southeast of West Palm Beach, Florida, and moving northwest at 12 mph (19 kph) over the Bahamas.

Forecasters say Hurricane Matthew is now pounding portions of the Central Bahamas and is expected to strengthen as it approaches Florida.

The U.S. National Hurricane Center in Miami said Matthew remains a powerful Category 3 storm with top sustained winds of 115 mph (185 kph) as of 2 a.m. EDT Thursday. It added that Matthew is expected to intensify over the next day or so and is forecast to again become a dangerous Category 4 hurricane as it nears Florida’s Atlantic coast.

The Miami forecasting center said no changes have been made to the existing hurricane and tropical storm warnings and watches as of 2 a.m. EDT.