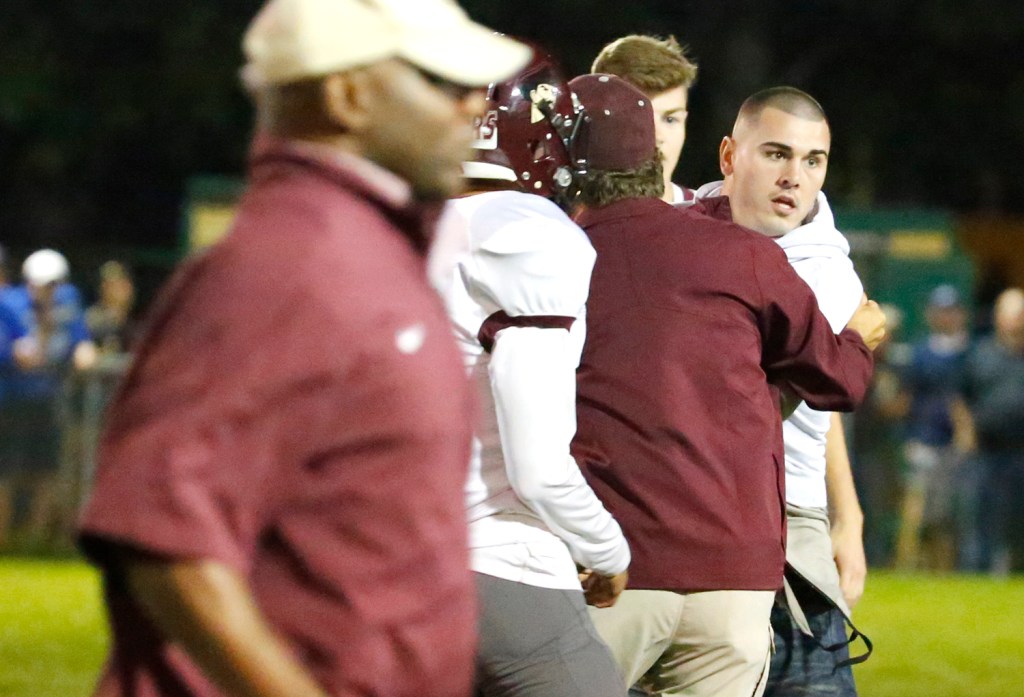 St. Joe's alumni and Ole Miss quarterback Chad Kelly is restrained after leaving the stands to come to the aid of his brother, Casey, who was involved in an altercation with the Timon bench during second quarter action at Tiff farms on Friday,Oct. 7, 2016.(Harry Scull Jr./Buffalo News)

Ole Miss coach Hugh Freeze on Monday stood by his statement Friday night after Chad Kelly had to be restrained at his brother’s high school football game in New York, adding there won’t be any discipline for his senior quarterback.

“He was very apologetic that it brought a bad light on him and our program again, but I think the events that happened could’ve happened to a lot of us,” Freeze said. “He knows he can not continue to do that in his brand change. But that’s it. It’s over.”

Back home in Buffalo during Ole Miss’ bye week, Kelly attended a game between Bishop Timon-St. Jude and St. Joseph’s Collegiate Institute that was suspended in the second quarter when St. Joe’s quarterback Casey Kelly, Chad’s younger brother, took a late hit out of bounds, resulting in a benches-clearing brawl that reportedly started on top of Casey.

Chad, who also attended St. Joe’s before stops at Clemson and East Mississippi Community College, left the stands and ran onto the field before having to be restrained by coaches and players. Video footage didn’t show Chad actually participating in the scuffle.

Freeze said in a statement Friday that Chad was remorseful once the coach had a chance to speak with his quarterback and his family immediately after the incident, something Chad echoed Monday during his first public comments since the incident.

“If I could’ve did it differently, I definitely would’ve,” Chad said. “I obviously would not have went and ran out on the field of course.”

Chad’s past incidents have been well-documented. He was dismissed at Clemson following a verbal altercation with coaches during the Tigers’ spring game in 2014 while a plea deal was reached after an arrest outside a Buffalo bar and restaurant just days after Chad signed with Ole Miss in December of that year.

While Chad said he regretted his actions over the weekend, he instinctively reacted the way he believes many might have given the circumstances.

“I’m sure any of us if we saw a family member out there in need of help, we would’ve came to the rescue too,” Chad said. “But looking forward to the next game. … I’ve got to make the right decisions.”