Ole Miss’ Sebastian Saiz healthy, ready to be ‘the guy’ 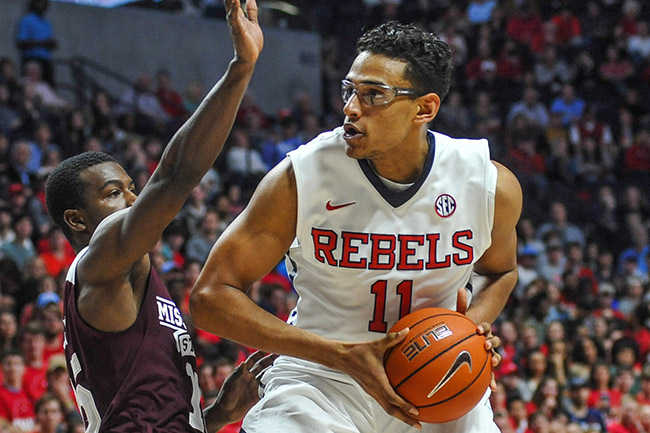 The eye patch is gone.

A strong junior season for Sebastian Saiz, one in which he averaged 11.7 points and 8.7 rebounds, was interrupted when he suffered a partially detached retina. It required surgery to the Ole Miss forward’s right eye, which ultimately cost him six games, most of which Saiz attended as a cheerleader wearing the protective covering.

Saiz will still wear goggles during games once the Rebels open the season Nov. 11 against Tennessee-Martin, but it will only be as a precaution now that the 6-foot-9 senior has two healthy eyes.
“As soon as they told me I was good to go, I threw it away,” Saiz said of the eye patch. “I don’t want to see that thing ever again in my life.”

With Stefan Moody no longer around, head coach Andy Kennedy plans to run the Rebels’ offense through Saiz on the interior, a stark contrast from recent years when Ole Miss depended heavily on Moody and Marshall Henderson to score in bunches from the perimeter. Saiz shot nearly 50 percent from the field and finished fourth in the Southeastern Conference in rebounding last season, numbers Kennedy said he needs and expects his veteran big man to improve on over the course of a full season as the clear No. 1 option.

Another retooled roster has just four other players that have ever played a game for Ole Miss.

“He’s a guy that I’ve challenged to be a double-double guy for us this year and lead the SEC in rebounding, which I think will have great value for him and our team moving forward,” Kennedy said. “I think that’s a challenge that he’s up for.”

It’s a role Saiz wasn’t sure he was ever going to get the chance to fill when he first got poked in the eye during Ole Miss’ win at Memphis late last year. Nearly a month later, before a game against LSU in January, Saiz woke up with impaired vision and had surgery to get his retina reattached, which kept him away from any basketball-related activity for nearly a month.

“It was one of the scariest things to happen in my life,” Saiz said. “Going down for a couple of games at the beginning just because of the hit (against Memphis) and after that coming back to play. And after that, go back to surgery because my retina was coming off and I was going blind.”

The surgery was a success. He can see everything clearly again, including that primary role.

“Finally, after three years of being here, it feels great to be the guy,” Saiz said.

Saiz will operate mostly near the basket like usual, but he put in a lot of work in the offseason to diversify his offense. Saiz has attempted just 10 3-pointers in his career, but he’s developed the range to take — and make — more long-distance shots.

“That’s an area of his game that you guys haven’t seen,” Kennedy said. “He’s been a good 15-, 16-foot jump shooter, but now with some of our actions and roll and replace, he’s going to have 3s. I’d be surprised if he didn’t make a lot of 3s throughout the course of the year.”

Said Saiz, “It’s only a part of my game, but it won’t define me. I know I’m a tough guy getting rebounds and putting everything together. But it gives me another weapon on the offensive side of the court.”

For Saiz, it’s part of the desire to show that the new version of himself is better than the old one.

“It’s one of the biggest reasons I stayed at Ole Miss because I wanted to prove to myself and to everybody that I can do way better than I was doing last year before I got injured,” he said. “That gives me motivation every day to improve.”