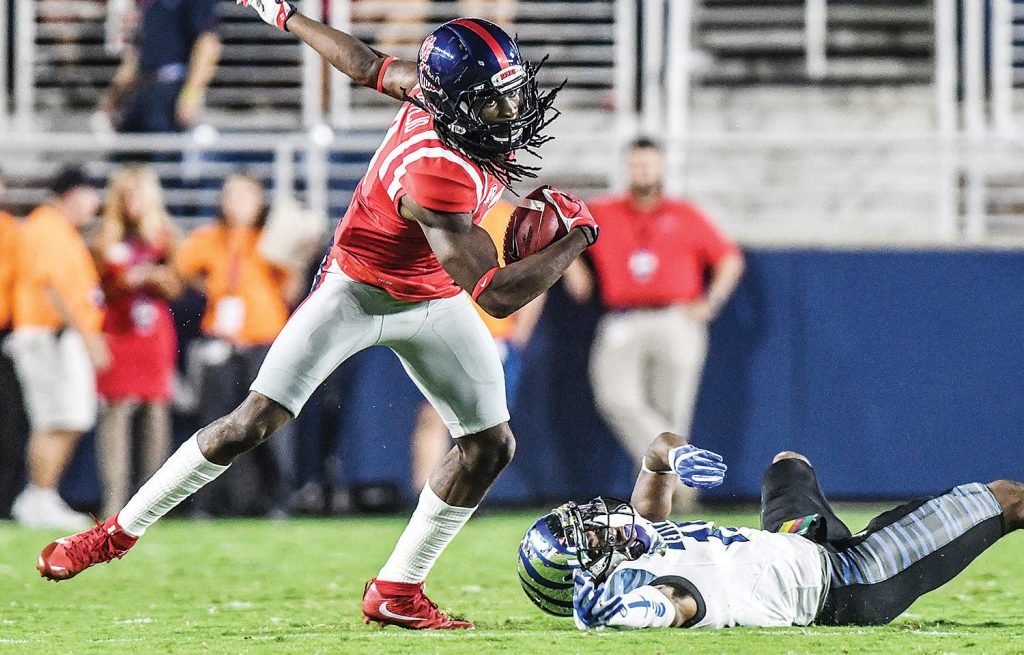 Ole Miss continues to be the nation’s highest-ranked two-loss team.

The Rebels took advantage of some other results around the country during their bye week, sliding up two spots to No. 12 in the latest Associated Press top 25 released Monday. Ole Miss (3-2, 1-1 Southeastern Conference) also moved up to No. 13 in the Amway Coaches poll.

Ole Miss and Arkansas are among a handful of teams with multiple blemishes on their record to be ranked. No. 14 Florida State, which owns a head-to-head win over the Rebels, No. 19 Oklahoma and No. 23 Auburn, which makes its season debut in the poll, are the others.

No. 24 Western Michigan and No. 25 Navy, fresh off its upset of then-No. 6 Houston, also appeared in the rankings for the first time.

The Seminoles were the biggest riser with a nine-spot leap following their 20-19 victory over then-No. 10 Miami on Saturday while Virginia Tech, ranked 25th a week ago, took North Carolina’s spot at No. 17 after a 34-3 rout of the Tar Heels.

The top 5 remained the same with No. 1 Alabama and No. 2 Ohio State leading the way followed by Clemson, Michigan and Washington, respectively. Louisville stayed at No. 7 while Texas A&M moved up two spots to No. 6 following its two-overtime win over No. 9 Tennessee. No. 8 Wisconsin and No. 10 Nebraska each moved inside the top 10.

During his weekly press conference on Monday, Ole Miss coach Hugh Freeze gave status updates on two key defensive players. Linebacker DeMarquis Gates sat out the Memphis game due to a violation of team standards. After the game, Freeze said it was up to Gates on if the suspension was a multi-game situation or a one-and-done with the Tigers.

On Monday, the ball was still in Gates’ court.

“Again, I say Gates, it is totally up to him,” Freeze said. “He knows exactly what he has to do to be ready to play.”

Fadol Brown was the other player which Freeze gave a small update on. The senior defensive end has been struggling to recover from a foot injury suffered last season. He was pulled from the depth chart before the Georgia game, and Freeze noted then it was going to be a “long term” situation. On Monday, Freeze hinted the Rebels could possibly get Brown back for Arkansas.

“I have no idea what Fadol’s (status) will be because we haven’t practiced yet,” Freeze said. “But it will probably be a game-time decision if that. I think he’s going to try to see what he can do.”

Jake Thompson contributed to this report.