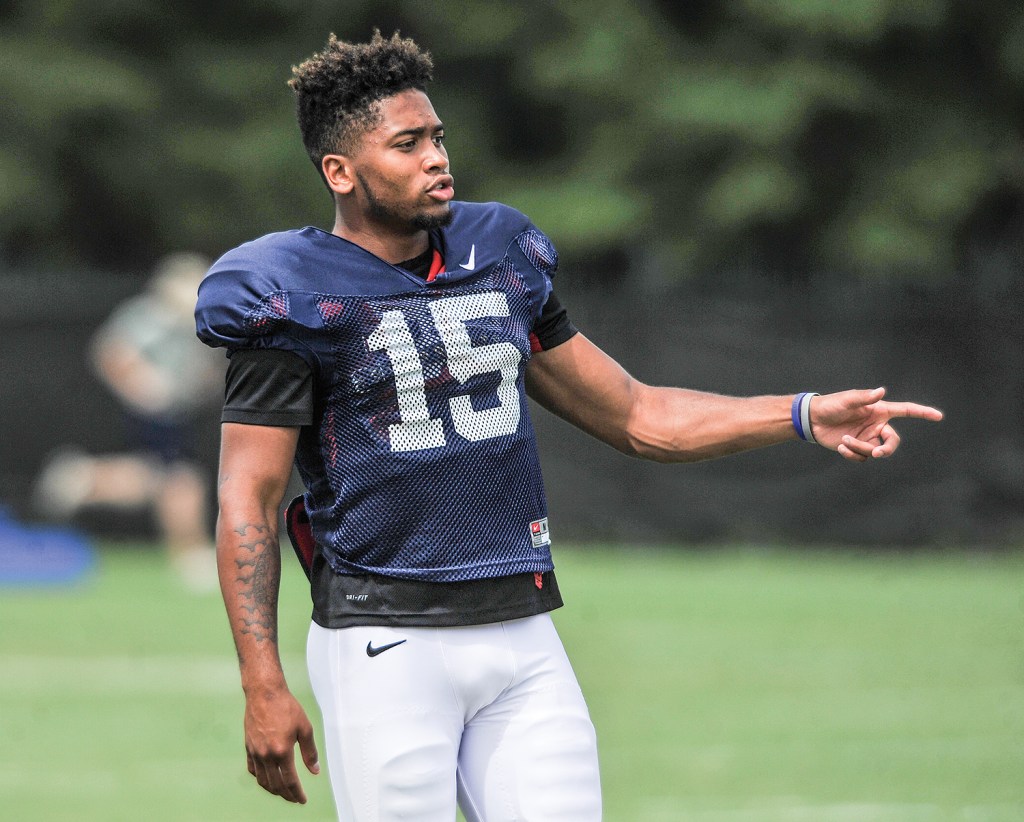 Ole Miss safety Myles Hartsfield (15) is the only true freshman to start every game for the Rebels' defense. Hartsfield has 15 total tackles through the first five games of the season. (Bruce Newman)

Ole Miss’ young safeties are swimming, but they’re at least starting to hold their heads above water.

Life without Trae Elston and Mike Hilton has been full of youth on the back end of the defense with three sophomores and freshmen in the two-deep at the position. Zedrick Woods and Myles Hartsfield have started every game there while another true freshman, Deontay Anderson, is a significant part of the rotation.

Things have gone about as expected for a group that inexperienced, but each passing game is helping.

“It’s the usual learning bumps early with the young guys, but I think they’re playing faster,” safeties coach Corey Batoon said. “The communication has been much better every week. I think we’ve improved on that. Our fundamentals have gotten better.”

Batoon said tackling and making plays on the ball are “things that have to happen for us to be successful.” Ole Miss is still ranked in the bottom half nationally in pass defense (234 yards allowed per game) but has yielded just two touchdowns through the air and is starting to get some impact plays from its youngsters.

Two of the secondary’s three interceptions came against Memphis from Woods, who returned one of them 31 yards for a score. Woods is second on the team with 29 tackles while Hartsfield has 15 stops and a pass breakup.

“Defensively we did cause pressure and create turnovers, which is a big positive,” head coach Hugh Freeze said. “We’ve got to build on that.”

But the x-ranked Rebels (3-2, 1-1 Southeastern Conference) are still giving up their share of big plays in the passing game. After limiting Alabama and Georgia to 9 yards a completion the previous two weeks, Ole Miss surrendered nearly 12 yards a completion against Memphis as the Tigers threw for 355 yards, though Freeze said that wasn’t just about the Rebels’ youth.

“When you give up explosive plays, they usually result in easier points. That’s what we’ve done,” Freeze said. “It’s not just one position.”

But it’s taking some time for the youngsters on the back end to recognize what they’re seeing from opposing offenses and adjust any time they see something new. Batoon said communicating play calls and checks goes through every member of the secondary individually, which isn’t any different from the way it’s been in years past.

But it’s still a work in progress.

“There’s indecision, and then (the young players) get told what it was and now there’s that processing time,” Batoon said. “That’s always what we’re battling. Like all the young guys at any position, it’s being familiar to the point where you’re not thinking, you’re reacting.

“We were able to make some plays (against Memphis). I’m happy. We’ve just got to continue to improve.”

Ole Miss’ Sebastian Saiz healthy, ready to be ‘the…