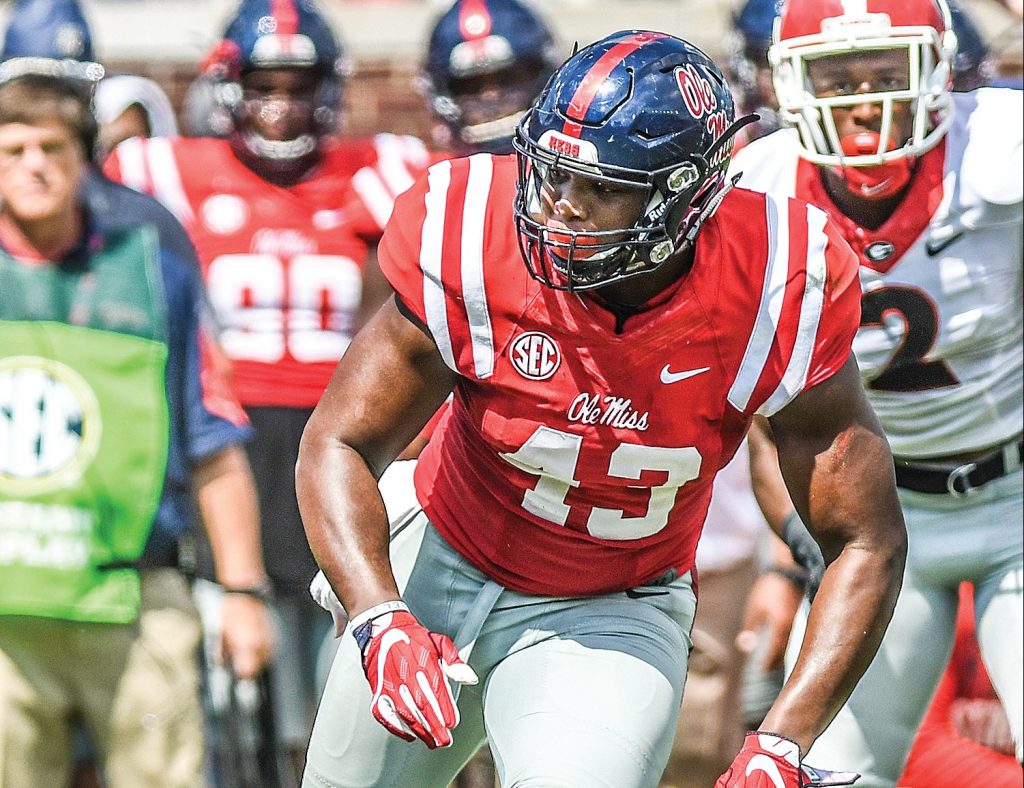 Ole Miss plays less linebackers than the 4-3 and 3-4 defensive schemes that are more traditional, yet the Rebels continue to add to their options at the position.

Head coach Hugh Freeze said the Rebels (3-2, 1-1 Southeastern Conference) are still working through them all ahead of Ole Miss’ trip to No. 22 Arkansas on Saturday (6 p.m., ESPN).

“It will continue through this week,” Freeze said. “We are working six different guys at those spots and just trying to find the best combinations for what we are asking them to do. It will probably continue on throughout the season really.”

No. 12 Ole Miss has started three different middle linebackers in its 4-2-5 base scheme while its best linebacker and leading tackler, DeMarquis Gates, didn’t play against Memphis because of an unspecified violation of team standards. Whether the Rebels have Gates back on the outside against the Razorbacks is “totally up to him” to fulfill the requirements to return to the field, Freeze reiterated this week.

Terry Caldwell or Tayler Polk would likely get the start at stinger if Gates isn’t available while defensive coordinator Dave Wommack hinted Tuesday that redshirt freshman Willie Hibler, who’s getting a look at the stinger position, may also get some snaps there against Arkansas (4-2, 0-2).

“We played him in some roles (during the bye week) that I don’t want to talk about here for obvious reasons, but I thought he did some good things for us,” Wommack said.

The biggest inconsistency is in the middle. Gates, Rommel Mageo and Detric Bing-Dukes have all taken their turn there with Bing-Dukes starting the last two games with mixed results.

The 6-foot-1, 247-pounder has shown his physicality with 14 combined tackles against Georgia and Memphis but struggled to keep up in coverage against the pass-happy Tigers, who threw for 355 yards. Freeze recently said Mageo is still trying to fully grasp his gap assignments and that Gates may have to play some in the middle when he returns.

Redshirt freshman Shawn Curtis, who moved to defensive end in the spring, has been back practicing with the linebackers and could provide depth along with Temario Strong and Ray Ray Smith.

Bing-Dukes will likely get the call again against Arkansas’ power running game, though Ole Miss knows as well as anybody the Razorbacks’ offense has evolved. Arkansas threw for 442 yards in an overtime win over the Rebels last season and has the SEC’s third-best passing offense (272 yards per game) this season.

Hogs in the way

Last season’s wild 53-52 loss to Arkansas — one that included a lateral on fourth-and-25 that kept the Razorbacks alive late and ultimately kept the Rebels from playing in the SEC Championship Game — is still fresh on players’ minds.

But with Ole Miss needing wins to stay in this year’s Western Division race, running back Akeem Judd said getting even isn’t the driving motivation this year.

“It ain’t really a revenge thing,” Judd said. “We’re trying to win every game regardless of who it is, and they’re in the way.”

Issac Gross is going through his fifth and final college season healthy following surgery on his neck last season that ended his campaign after just one game.

The Rebels’ 6-1, 263-pound nose tackle has played in all five games this season, recording 12 tackles with 1.5 tackles for loss. Most importantly, he said he hasn’t been limited in any way.

“I feel great. I don’t feel anything,” Gross said. “I’m waiting on the next Saturday every week.”

Gross, a native of nearby Batesville, spent most of last season and the spring rehabbing but said he no longer has to undergo any kind of treatment.