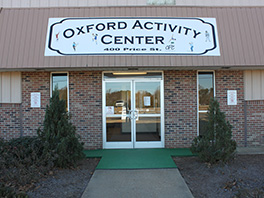 Earlier this year, the Oxford Park Commission board were told city officials committed to spending $7 million on a new activity center.

On Wednesday, some of those officials agreed they might be able to find another million dollars to build a larger center.

Mayor Pat Patterson appointed aldermen Robyn Tannehill, Jason Bailey and Ricky Addy to serve on a committee to review the plans and make a formal recommendation to the full Board of Aldermen later this month. The committee met with the OPC board Wednesday to review the three options.

The first option, Phase 1A, came under budget at $6.2 million and consisted of two large basketball courts with hardwood flooring that could be sectioned off to create four youth courts. A 12-foot wide walking track was drawn above the courts. That option was a “bare bones” design, addressing the most immediate need for space but had no extra classroom space.

The Phase 1B option has an extended front area with a fitness room and lounge area. That option is estimated to cost $7,750,000.

The third option, or Phase 2, would extend the front even more and include four multi-use areas. That option is estimated to cost $10.5 million.

Building for the future

Patterson, who attended the meeting, told the committee if they choose Phase 1B at $7.75 million, he was fairly sure the city could come up with the extra funds.

“I want to make sure we build for the future,” he said at the meeting. “If we do the $8 million, I’m sure we can, in four to five years from now, find the money to do Phase 2.”

OPC Director Seth Gaines said once OPC has a final amount to spend, the interior of the building in the Phase 1B plan could be changed to allow for some classroom space.

With the committee showing support for the larger center, the OPC board voted to formally support the $7.75 million Phase 1B plan.