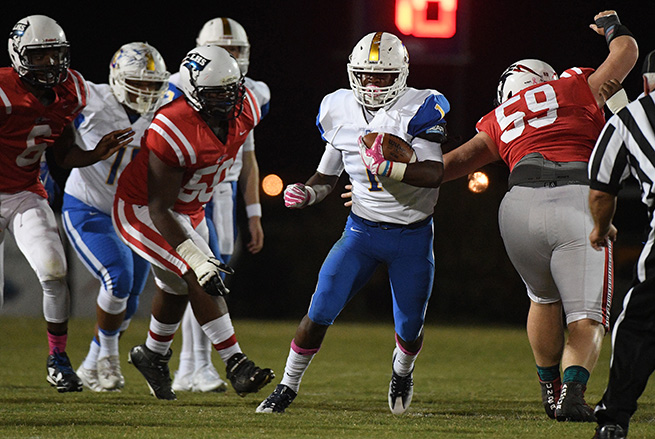 Hiram Wadlington (1) and the rest of the Chargers will try to keep their improvement going on both sides of the ball in a homecoming matchup with New Hope on Friday. (Thomas Graning)

After a couple weeks where the offense was struggling and looking lethargic, things have picked up for the Oxford High football team. The Chargers were held to 11 points total against Lafayette and West Point. Since then, they have outscored their opponents 90-13, including a shutout against Saltillo two weeks ago.

“We’ve executed a lot better offensively,” Cutcliffe said. “We’ve had a couple good weeks of practice, and I think it’s very evident we’re playing better. We’re running the ball better, which has been a big part of it. That’s been promising.”

Another issue of Oxford’s was the inability to cash in on lengthy drives as well as preventing big plays from the opposing team. Against Lewisburg, it was the Chargers who were making the big plays, scoring on passes of 53 and 76 yards by quarterback John Reece McClure. The defense has done their job as well, giving up only one offensive touchdown in the past two games.

The defense will have their hands full Friday going up against a New Hope offense that is potent through the air. Through the first seven games of the season, the Trojans have thrown for 2,111 yards, averaging right at 301.6 yards per game. Senior quarterback Thomas Stevens has accounted for most of that production, completing 130 of 203 passes for 2,058 yards and 15 touchdowns.

He has thrown nine interceptions.

The New Hope running attack is mostly to keep defenses honest, racking up 95.7 yards a game. They do have 12 rushing touchdowns on the season.

“(Stevens) is playing outstanding this season,” Cutcliffe said. “They have a lot of talented receivers that are making plays for them. It’s certainly a big challenge for our defense to go up against their passing attack.”

Airing it out
A reason Oxford has gotten their offense back on track is the amount of weapons McClure has made with the receiving corps. In years past, defenses knew to key in on D.K. Metcalf, Zach Cousar and a select few and made the Chargers have to find other means to score.

This year, Oxford has seven different receivers, some of them even running backs, catching touchdowns. Barry Flowers and DeDe Pegues are the two main threats, combining for 822 yards and seven of the 12 touchdowns.

“We’ve had some injuries at receiver, and we’ve had some other guys step up and play well,” Cutcliffe said. “I think that’s a great thing to have offensively, to have a lot of guys at receiver that can make plays. It makes you difficult to defend when the defense has to worry about multiple guys.”