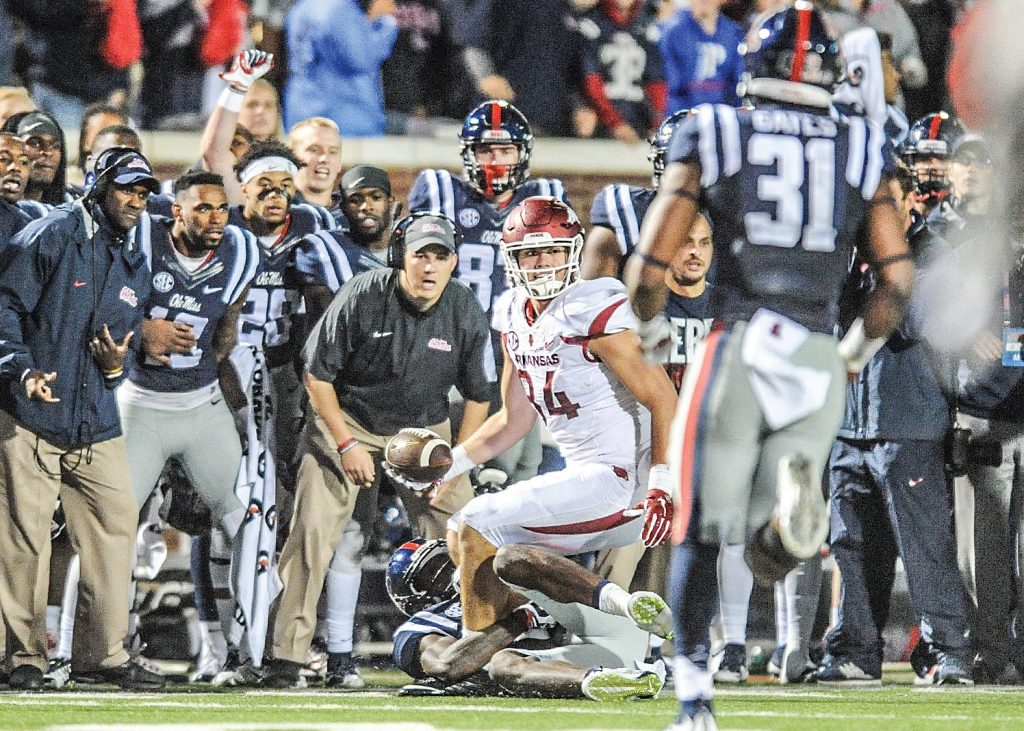 Ole Miss players and coaches look on as Arkansas tight end Hunter Henry (84), in the grasp of Ole Miss defensive back Tony Bridges (1), laterals the ball back to running back Alex Collins, who runs for a first down on a fourth-and-25 play in overtime at Vaught-Hemingway Stadium in Oxford on Nov. 6, 2015. Arkansas won 53-52 in overtime. (Bruce Newman)

The reaction was universal.

“I literally thought the game was over like three times,” tight end Evan Engram said.

Said quarterback Chad Kelly, “I think I raised my hands like it was over.”

“We thought he was down,” nose tackle D.J. Jones recalled, “so we were over (on the sideline) celebrating.”

But Hunter Henry wasn’t down.

Arkansas’ former All-American tight end stayed up long enough to get off a desperate lateral on a fourth-and-25 play that won’t soon be forgotten around these parts, and the rest is a painful yet all too vivid memory for Ole Miss. Alex Collins got a perfect bounce to start his momentum down the sideline, quarterback Brandon Allen eventually found the end zone on a gutsy two-point conversion, and the Razorbacks delivered a 53-52 punch to the Rebels’ gut last November.

“If I ever see the end of that game, of course it still makes me sick,” Ole Miss coach Hugh Freeze said.

The Southeastern Conference Western Division foes will meet again Saturday (6 p.m., ESPN), this time at Arkansas’ Donald W. Reynolds Razorback Stadium, a place No. 12 Ole Miss (3-2, 1-1 SEC) was run out of 30-0 in its last visit two years ago.

Last year’s loss to No. 22 Arkansas (4-2, 0-2) ended up keeping the Rebels out of the SEC Championship Game, a game Ole Miss still hasn’t played in since its inception in 1992, but it’s this year’s division race that has the Rebels galvanized for their rematch with the Razorbacks more than any talk of revenge. Having already lost to unbeaten Alabama, Ole Miss in all likelihood needs to win out and get some help in order to make it to Atlanta.

“They’ve had our number two years in a row, so we definitely want to get off that losing streak,” Engram said of Arkansas. “But it’s not our main motivation. Our main motivation is taking one game at a time. We’re trying to win.” 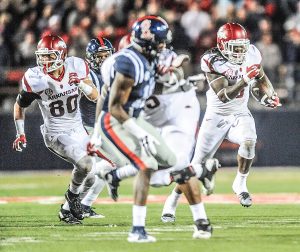 Arkansas running back Alex Collins (3) runs for a first down on a fourth and 25 play in overtime at Vaught-Hemingway Stadium in Oxford, Miss. on Saturday, November 6, 2015. (Bruce Newman)

But if any loss for the players who are still around ranks as the toughest they’ve endured at Ole Miss, topping that heartbreaker against Auburn that ended Laquon Treadwell’s season in 2014, it’s 2015 Arkansas.

“Just how crazy everything happened,” Engram said, still makes it hard to shake.

Ole Miss blocked a field goal at the end of the back-and-forth affair just to get to overtime. It wasn’t over when Kelly ran for a touchdown on the first possession of extra time because Collins took the lateral 31 yards for a fresh set of downs. It wasn’t over when Collins fumbled at the end of the run because Arkansas recovered the loose ball. And it wasn’t over on the Razorbacks’ first two-point attempt after eventually scoring on Allen’s final touchdown pass because defensive end Marquis Haynes grabbed Allen’s facemask on a sack.

“Anything can happen,” safety Zedrick Woods said. “We thought we had the game won the last few seconds of the game, and it turned just like that.”

The second chance finally ended it with Allen diving into the front of the end zone.

Said Jones, “For something to come that close, a penalty to bring them back in the game and a lateral back, nah, I’ve not.” 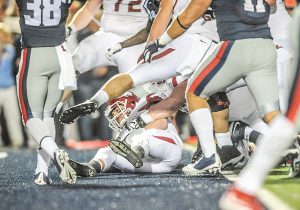 Arkansas quarterback Brandon Allen (10) dives in to the end zone for a two-point conversion during overtime to deliver a stunning win for the Razorbacks last year. (Bruce Newman)

Saturday could be another shootout. Ole Miss is putting up nearly 42 points a game this season while Allen’s younger brother, Austin, is now at the controls of an Arkansas offense that’s not far behind at 35 points each time out.

An ending as dramatic as last year’s seems implausible, but Ole Miss is preparing for anything.

“Seeing them going for two points, in the back of my mind, I was like, ‘Dang, wish we would have done that.’ So I think coach learned from that,’” Kelly said with a smile. “He might even do it this week.”