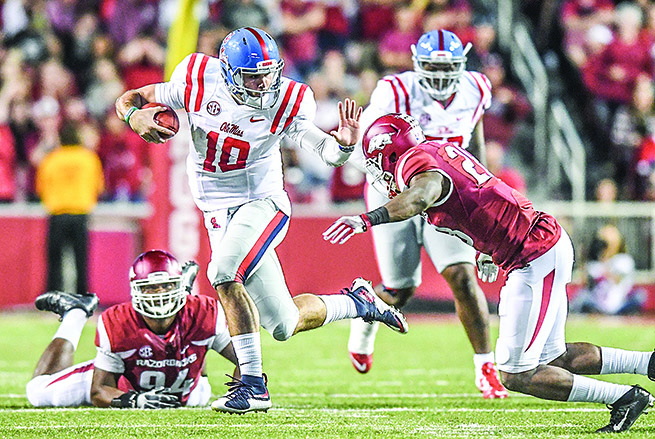 FAYETTEVILLE, Ark. — After two games where the running attacked appeared to be finding its footing, It took a step back against Arkansas. Akeem Judd and Eugene Brazley combined for 61 yards and a touchdown on 17 carries. The onus then fell on quarterback Chad Kelly.

It was a task he was willing to take on and looked to be carrying the Rebels to their second Southeastern Conference victory of the season. Until his legs let Ole Miss down.

On a fourth-and-16 with Ole Miss trailing Arkansas 34-30, Kelly took it upon himself to try and convert a first down. It looked promising until Kelly was hit by a Razorback defender as he was nearing the first down sticks, causing the ball to fly backwards and out of bounds. It resulted in a turnover on downs, and Arkansas took the win for the third year in a row.

“I saw (wide receiver) Van (Jefferson) over to the left, he beat them on the press coverage and then he fell down,” Kelly said of the start of the play. “Next thing you know a safety rolled and a guy was behind me and I saw a hole and tried taking off. I got to protect the ball and slide or do something. Instead of just trying to take a hit and get the first down.”

Before that fatal turnover, Kelly was electric on his feet. The senior signal caller ran for a team-high 89 yards and two touchdowns on 14 carries. A big play by Kelly’s feet came in the fourth quarter when he scrambled for a 17-yard score to put the Rebels up 30-27 with nine minutes left.

The carousel at starting linebacker kept rotating on Saturday night as junior Ray Ray Smith earned his first start at outside linebacker. Smith looked like he was bound for an impressive debut, recording the first tackle of the game for a two-yard loss. Smith would end the night with four tackles, two of them solo.

Smith got the nod from head coach Hugh Freeze after impressing him during practice last week.

“He played I know two good snaps right at the first then he struggled with some fits after that,” Freeze said. “I thought he had the best week and knew what to do. It was just then physically can you go and do it rep after rep after rep.”

With three total touchdowns (one pass, two rush), Chad Kelly moved past former Ole Miss quarterback Archie Manning for third-most touchdowns responsible for in a career with 58. … Sophomore defensive back Zedrick Woods led Ole Miss with 10 tackles for his second double-digit performance of the season. …Ole Miss has now scored 30-plus points in 10 straight games dating back to last season. … Senior tight end Evan Engram notched his third 100-yard receiving game of the year and sixth of his career, recording 111 yards and one touchdown on seven catches.