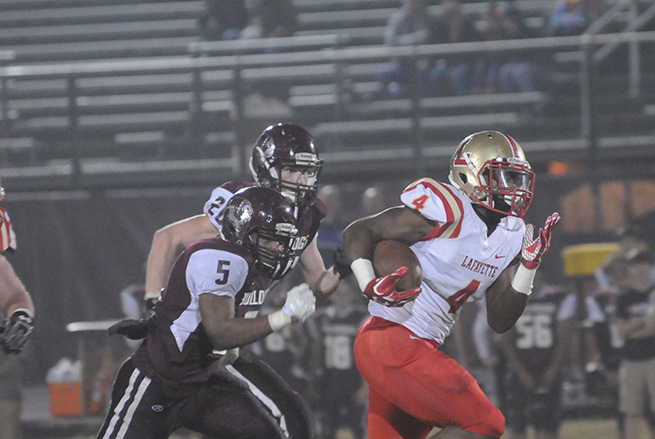 NEW ALBANY — The train whistles were blowing just east of the New Albany High School football field Friday night, but it was the Lafayette High football who continued to keep rolling down the tracks.

Winning their sixth straight game, the Commodores handled New Albany the same way they’ve handled their previous five opponents in a 52-17 win. The victory assured Lafayette (6-2, 3-0 Region 2-4A) of a berth into next month’s MHSAA Class 4A state playoffs.

“We’ve got a pretty good football team,” Lafayette head coach Michael Fair said. “When we’re clicking, we play well and we can put some points on the board.”

After the Bulldogs (3-6, 1-2) to punt on their opening drive, Lafayette marched down the field and capped a 77-yard, nine-play drive with a 22-yard run by Jamarcus Quarles for the early 7-0 lead midway through the first quarter.

Former Oxford High head coach and first-year New Albany assistant coach, Johnny Hill, witnessed something taken right out of his patented playbook as Lafayette pulled out the tricks early with an onside kick and recovery.

With a short field, Lafayette needed only two plays before Quarles found the end zone for his second touchdown of the night and the Commodores scored 14 unanswered points in a span of 18 seconds of game clock.

The zero did not stay on New Albany’s half of the scoreboard long as running back Jordan Lipsey capped a four-play drive with a six-yard run, making it a 14-7 Commodore lead with five minutes left in the opening quarter.

The Bulldogs had a short field on their scoring drive due to a lengthy kickoff return helped with a personal foul called on Lafayette after the play was over.

“Our kickoff team, we had a few breakdowns in that,” Fair said. “We had some personal fouls and we’ve got to clean that up. We’re not playing as well as we should and our coaches see that. We’ve got a lot to work on and that’s encouraging for me to see us play well but still have a lot to work on.”

After giving up a touchdown, Lafayette responded with 24 straight points of their own, including a 38-7 lead at halftime.

The third quarter started out slow for Lafayette, as New Albany mounted a little 10-0 run with another touchdown on the ground by Lipsey as well as a 47-yard field goal by Payton Snyder.

“We tried to slow out tempo down a little in the third quarter,” Fair said. “To be honest, we’re not very good when we do that. We’re learning that the hard way I guess. We’re really good when we stay in tempo and on schedule.”

The offense proved Fair to be a main of his word when they got clicking early and often. The running game powered by Quarles and Jamie Shaw was on display again on Friday with the duo accounting for four rushing touchdowns. Quarles had runs of  22, 48 and three yards while Shaw scored on a one-yard run midway through the fourth quarter.

Quarterback Will Ard was efficient through the air, completing 10 of 16 passes for 223 yards and three touchdowns.

The Commodores only punted once on Friday night, yet they were lined up for it on two occasions. The second punt attempt never came to be as Fair pulled out a trick play, seeing Brandon Turnage complete a 34-yard pass to Tyler Williams on a 4 & 6 at the New Albany 40. The play kept the Lafayette drive alive, which ultimately was ended by Shaw’s touchdown.

“We actually just got that play a couple weeks ago and (Fair) said we were going to start running it,” Turnage said. “He knew I’ve had a little quarterback in me since pee-wee league.”

Lafayette now turns their sights to a game that has been circled on the schedule for a long time as they will host Senatobia next Friday with region championship implications.