Ole Miss’ defense breaks against Arkansas at a crucial time 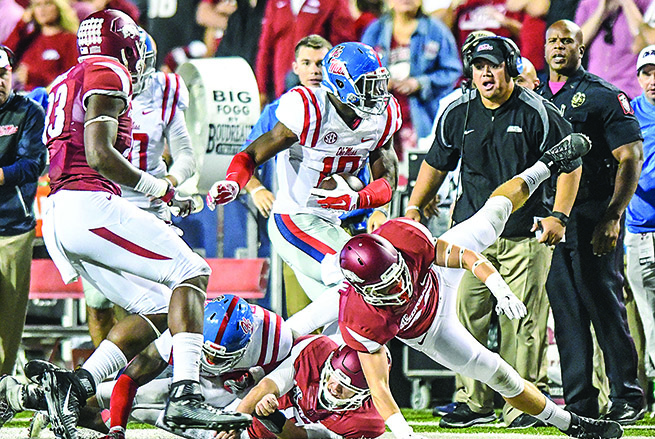 Ole Miss defensive end Marquis Haynes (10) is run out of bounds following his interception against Arkansas at Reynolds Razorback Stadium in Fayetteville, Ark. on Saturday, October 15, 2016.

FAYETTEVILLE, Ark. — Hugh Freeze described his defense a bend-but-don’t-break type of defense. For much of Saturday night’s game against No. 22 Arkansas that was the case. The final nine minutes was a different story.

After quarterback Chad Kelly scampered 17 yards to put Ole Miss up 30-27 with nine minutes left in the game, the Rebels first lead the entire night, It was up to the defense to try and hold the Razorbacks just one last time.

Instead on the second possession after Kelly’s touchdown, Arkansas quarterback Austin Allen marched his offense down the field 56 yards on 10 plays. The drive was capped by a six-yard run by wide receiver Jared Cornelius, putting Arkansas back in front 34-30 with 2:20 remaining. It was as drive that was punctuated by third down conversions, which Arkansas was 5-for-16 on the night.

It was a scoring drive that looked like Ole Miss may not allow after giving up two quick touchdowns pass to Allen early in the game, which were not viewed very well by head coach Hugh Freeze.

“I thought our defense gave (Arkansas) cheap scores early on, which was very frustrating,” Freeze said. “It’s certainly things that we worked on and felt like our kids had an understanding. But, they didn’t’. We got that fixed and then I thought our defense played well the second half and gave our offense chances.”

The Rebel defense buckled down after the two touchdown drives, causing Arkansas’ next five possessions to resulted in a field goal, field goal, punt, halftime and a punt. After giving up another touchdown there was even an interception when Marquis Haynes picked off a rushed pass by Allen in the fourth quarter.

“I thought we played better in the second half but it really doesn’t matter if go on to lose,” defensive coordinator Dave Wommack said. “We got up and tackled when we needed to a times. I thought they knocked us off the ball and had a lot of success running it in the first half. Then I thought we did a better job of taking it away in the second half. It’s disappointing. We’ve got to learn how to get better.”

As a team, Arkansas rushed for 200 yards on 51 carries but were held to only one score on the ground, Cornelius’ game-winner. Rawleigh Williams did the majority of the work load, rushing for 180 yards on 27 carries. Allen got his yards in, completing 19 of 32 for 229 yards and three touchdowns, as well as the lone interception.

“One play makes a difference in games like this,” Wommack said. “We have to find a way to overcome that as player and coaches.”