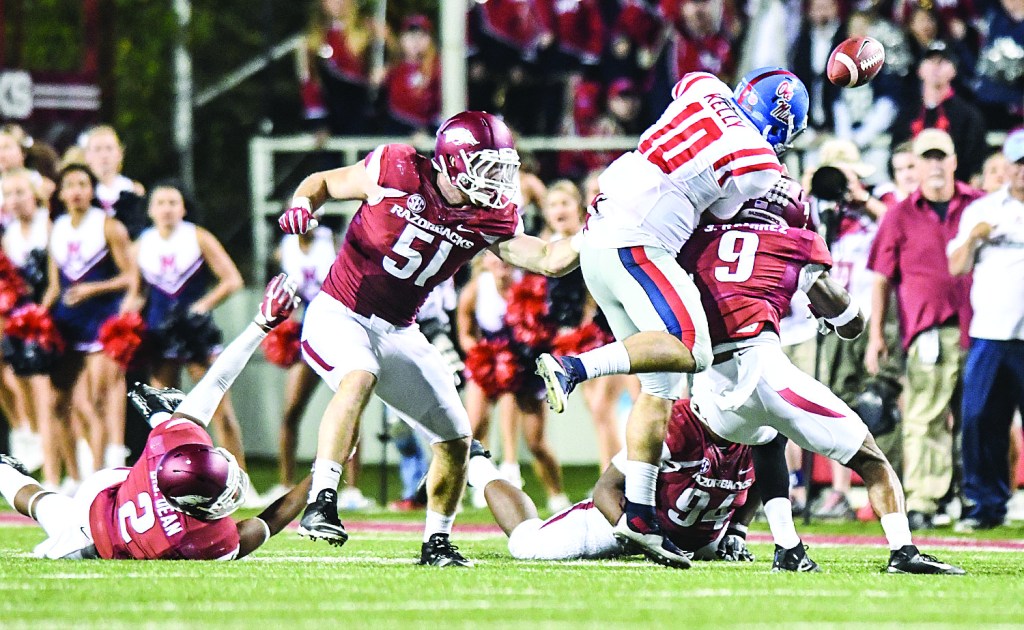 FAYETTEVILLE, Ark. — Ole Miss’ latest trip to Arkansas ended like so many of the ones that came before it.

Jared Cornelius scored on a 6-yard touchdown run late in the fourth quarter, and No. 22 Arkansas handed No. 12 Ole Miss a 34-30 loss in front of 73,786 fans at Donald W. Reynolds Razorback Stadium on Saturday, likely dealing the final blow to the Rebels’ Southeastern Conference Western Division title hopes. Ole Miss (3-3, 1-2 SEC ) dropped to 2-11 all-time in Fayetteville.

Quarterback Chad Kelly threw for 253 yards and a score while running for a team-high 89 yards and two touchdowns, including a 16-yarder that gave the Rebels their only lead at 30-27 with nine minutes left. But Arkansas (5-2, 1-2) responded with a methodical 10-play, 56-yard drive, converting a fourth-and-4 and a third-and-9 on the possession against an Ole Miss defense that struggled for most of the night before Cornelius ran in for the score with just 2:20 left.

Ole Miss needed to convert fourth-and-16 on its final possession after a sack and a false start. Kelly stepped away from the Razorbacks’ pressure and eventually took off but fumbled the ball out of bounds short of the line to gain while absorbing a hit from Santos Ramirez, allowing Arkansas to run out the clock for its third straight win in the series.

“Losing hurts,” Kelly said. “I know all those guys are hurting right now.”

Arkansas’ Austin Allen went 19 of 32 for 229 yards with three touchdowns and an interception. Rawleigh Williams ran for 180 yards on 27 carries. Evan Engram led Ole Miss with seven catches for 111 yards and a score.

The teams combined for 832 yards of offense, though 555 of those came in the first half. Only seven points were scored in the third quarter, a 2-yard shovel pass from Allen to Williams that gave Arkansas a 27-20 lead with 3:29 left before the fourth.

Ole Miss got a 33-yard field goal from Gary Wunderlich to get closer, and the defense got the ball back for the offense when Terry Caldwell pressured Allen into an interception by Marquis Haynes, setting the Rebels up at Arkansas’ 45-yard line. Kelly took off five plays later, sidestepped a pair of defenders and cut across the field to put the Rebels on top.

But the Rebels’ defense, which came into the game giving up more yards than anybody in the league and the second-most points on average, couldn’t hold it. Ole Miss defended 83 plays with the Razorbacks holding the ball for a whopping 40 minutes, 38 seconds.

“We’ve got to learn how to get better each week as players and a coach,” defensive coordinator Dave Wommack said. “If you don’t do that in this league, anything can happen. One play makes a difference in games like this.”

Arkansas had 188 yards of offense and averaged nearly 10 yards a play in the first quarter. Allen sandwiched touchdown passes to Dominique Reed and Drew Morgan around Kelly’s 13-yard scoring toss to Engram. A field goal gave Arkansas its largest lead of the first half at 17-6.

Ole Miss responded with a 67-yard drive capped by Akeem Judd’s 2-yard run. A stop near midfield after the failed fourth down got the ball back for the Rebels, who needed just 48 seconds to march 90 yards and tie it at 20 at the half on Kelly’s 8-yard scoring run.