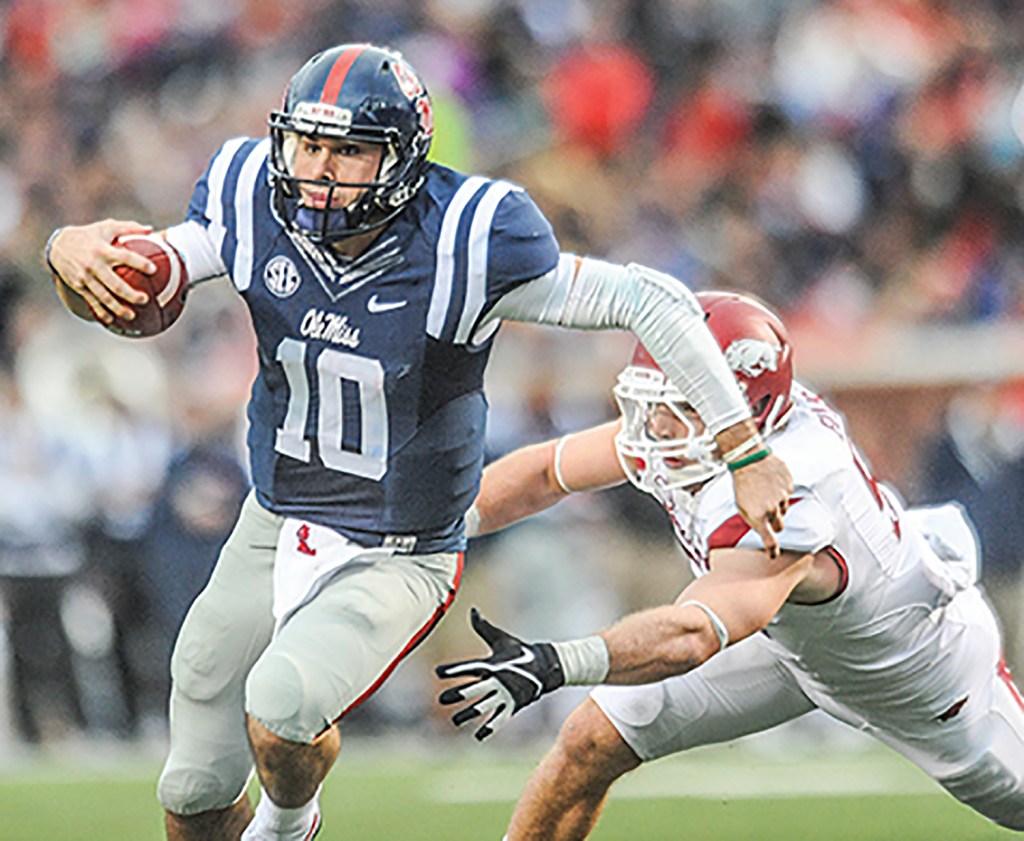 The game is over — Arkansas has defeated Ole Miss 34-30 tonight in Fayetteville.

Razorback quarterback Austin Allen threw three touchdowns and for more than 200 yards in leading his team to the win. It was Arkansas’ third straight win over Ole Miss and head coach Hugh Freeze.

Ole Miss faced fourth and 16 on its own 20 and Chad Kelly tried to run for it and was close but just short of the first down marker Kelly was hit and fumbled and Arkansas took over. The Razorbacks are now running out the clock for the victory over Ole Miss.

With 2:22 remaining Arkansas has second and goal at the Ole Miss 6 yard line. Ole Miss has called a 30-second time out.

Arkansas has a first-and-goal at the Ole Miss 7 with just more than two minutes.

Arkansas has the ball in Ole Miss territory with just more than 3 minutes left in the game, trying to move into scoring position for a game-tying field goal or a touchdown. The Razorbacks have moved the ball to the Ole Miss 39-yardline and have called a timeout.

Ole Miss gets the ball back but can’t do anything with it. A short run by Kelly and two incompletions force the Rebels to punt. Arkansas will start at its 45.

Arkansas takes advantage in 10 plays, finding the end zone on Rawleigh Williams’ 3-yard touchdown run on a pitch. Gates was there but missed the tackle. Arkansas 27, Ole Miss 20, 3:29 3Q

A bad snap rolls around with both teams having chances to recover. Arkansas eventually does, but it doesn’t hurt Ole Miss. Hogs punt.

Call stands. De’Andre Coley has been ejected. Arkansas starts at its own 12.

Kelly finds Van Jefferson to convert on third down on Ole Miss’ first possession of the second half, but his next pass for Jefferson is underthrown and intercepted. Josh Liddel called for targeting on Jefferson after the pick. The play is under review.

HALFTIME: Ole Miss 20, Arkansas 20. Defensive end Marquis Haynes was down in pain during Arkansas’ final possession of the first half appearing to hold his head. He eventually walked off on his own power.

Arkansas moves just past midfield, but Terry Caldwell stops Rawleigh Williams short on a third-down run to the outside. Ole Miss takes over at its own 10.

Kelly’s third-down pass is behind Quincy Adeboyejo. Ole Miss goes for it on fourth down from Arkansas’ 44, and Kelly and Engram aren’t on the same page. Hogs take over.

Arkansas moves to Ole Miss’ 18, but third-down pressure from Terry Caldwell forces an incompletion from Allen. Hogs settle for another field goal from McCain. That drive was 13 plays. Ole Miss’ defense having to defend a lot of them early. Arkansas 20, Ole Miss 13, 5:21 2Q

Ole Miss answers with a seven-play, 67-yard drive, passing most of the way. Kelly, who covered 26 of those yards with his legs, pitches to Judd on third-and-goal for the 2-yard touchdown. Arkansas 17, Ole Miss 13, 11:50 2Q

END OF FIRST QUARTER: Arkansas 14, Ole Miss 6. Hogs doing whatever they want offensively. Had 188 total yards in that quarter and averaged 9.9 yards per play.

Kelly throws incomplete on fourth down from Arkansas’ 40, but officials say Arkansas called a timeout before the snap. Kelly pooches it this time. It goes into the end zone. Arkansas will start at its own 20.

Ole Miss eventually finds the end zone on Kelly’s 13-yard pass to Evan Engram, who ran through Josh Liddell for the final couple of yards. But Gary Wunderlich’s PAT bangs off the upright. Eight plays, 61 yards on that drive. Arkansas 7, Ole Miss 6, 7:26 1Q

Carlos Davis goes 100 yards for a score on the ensuing kickoff, but a review showed Davis stepped out at the Ole Miss 39-yard line. Touchdown overturned. That’s where the Rebels start their next possession.

Arkansas needs just five plays to go 82 yards and take the lead. Austin Allen to a wide-open Dominique Reed for a 51-yard score. Rebels got no protection on Allen that drive. Arkansas 7, Ole Miss 0, 10:33 1Q

Gates and Ray Ray Smith start at linebacker. Gates gets to Arkansas quarterback Austin Allen on a third-down blitz. Rebels need their best linebacker to come up big. Hogs punt.

Ole Miss wins the toss, defers to the second half. Rebels will start on defense.

Linebacker DeMarquis Gates, who was suspended last week, and running back D’Vaughn Pennamon (hamstring injury) are dressed out and going through warmups.

We will have live updates here throughout the game so bookmark this page and return back during the contest.

Ole Miss has been on a mission to show it’s still one of the country’s best teams following early season losses to Florida State and Alabama, games in which the Rebels surrendered large leads. Despite the losses, Ole Miss has plenty of chances left this season to push its way back into the top 10 — beginning with an Arkansas team whose only losses have been to the Crimson Tide and No. 6 Texas A&M.

Ole Miss QB Chad Kelly vs. Arkansas QB Austin Allen. The two signal callers enter the weekend as the two most efficient quarterbacks in the Southeastern Conference. Kelly has thrown for 13 touchdowns and four interceptions in his second season as the starter for the Rebels, while Allen has thrown for 15 and five — three in last week’s loss to Alabama — in his first season as the Razorbacks starter.

Ole Miss: S Zedrick Woods. Arkansas allowed two defensive touchdowns by Alabama last week, while the Rebels have scored a defensive touchdown in each of their last three games. That includes an interception return for a touchdown by Woods, who had two picks in a 48-28 win over Memphis.

Arkansas: LB Brooks Ellis. The Razorbacks allowed 10.1 yards per play in last week’s loss to the Crimson Tide, and they enter this week without second-leading tackler Dre Greenlaw following foot surgery on Monday. Ellis leads Arkansas with 42 tackles from his middle linebacker position and will have even more expected of him with Greenlaw out.

While the Rebels have outscored their opponents 131-40 in the first half this season, they’ve been outscored 108-77 after halftime … Arkansas allowed six sacks a week ago in a 49-30 loss to Alabama, and it’s now given up 13 through six games — one away from the 14 allowed in each of the last two seasons … Arkansas has defeated Ole Miss in each of the last two seasons, including a 53-52 overtime win last season.