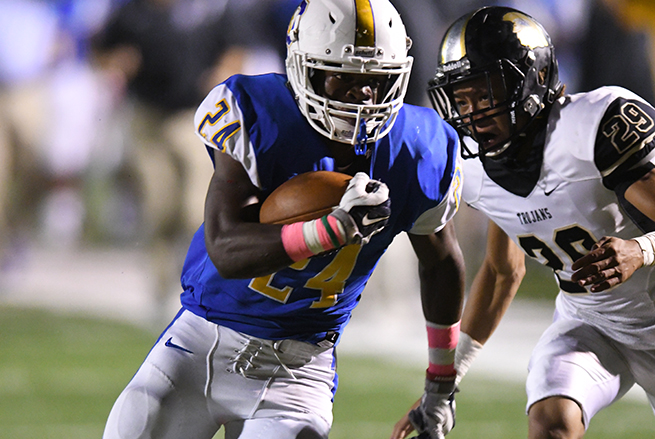 Things started off slow for Oxford High School in their game against New Hope on Friday night. The Chargers were stopped on their first possession, and New Hope quickly jumped out to a 7-0 lead on the ensuing possession. After that, however, it was Oxford’s game, with the Chargers eventually winning 31-13 at Bobby Holcomb Field.

Oxford (5-3, 3-1 Region 1-5A) won their third straight after dropping their region opener against West Point. New Hope lost ground in the crowded region standings, falling to 1-3 in 1-5A and 4-4 overall.

When Oxford got the ball back they stuck to the gameplan, feeding it to junior running back Hiram Wadlington and Lance Stewart and daring the defense to stop them. New Hope’s defense had no answer for the Chargers rushing attack, as Oxford utilized a number of counter runs to catch the defense off balance and the offensive line had no trouble opening big lanes for the Charger backs.

“We felt like coming in we’d be able to run the football, and we challenged our offensive lineman to really step up, and I thought they just responded unbelievably well,” head coach Chris Cutcliffe said. “I was proud of how they played.”

Wadlington had his best game of the season, rushing the ball 23 times for 185 yards and three touchdowns before he went down with an injury in the third quarter. Cutcliffe said that he was held out as a precautionary measure, and that he expects him to play in next week’s game. Meanwhile, Stewart took advantage of the extra carries and performed well as the fill-in feature back, rushing for 16 times for 181 yards.

“(Wadlington) was outstanding, Cutcliffe said. “It really starts with how well the offensive line played. Man they played an outstanding football game for us, and Hiram Wadlington was great, and Lance Stewart came in and also did a great job for us so that was really good to see.”

On defense, the Chargers dominated for the third week in a row, allowing just 13 points and holding New Hope quarterback Thomas Stevens, who came in the game averaging 294 passing yards per game, just 164 yards through the air.

Senior outside linebacker D.Q. Thomas continued his breakout as a defensive star, intercepting Stevens and returning a fumble for a touchdown.

“He has really stepped up, and its three weeks in a row he’s forced a turnover, and two of them have resulted in touchdowns,” Cutcliffe said. “So he’s really stepped his game up to another level and it’s a result of a lot of hard work, and a lot of great practices over the last few weeks and he’s really doing everything he can to put himself in a position to be successful.“

The Chargers will hit the road and head to Clarksdale next week.

“I think we’re headed in the right direction,” Cutcliffe said. “Even in the West Point loss we found a lot of positives and a lot of things to build on, and a lot of encouragement in that game, we just had a few too many mistakes against a good football game. We’ve been able to eliminate some of those big mistakes over the last few weeks and that’s where we’ve got to continue to keep up.”