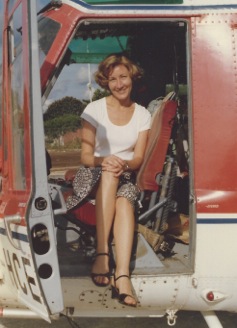 After teaching for three years in Caracas, Venezuela, I felt it was time to try another adventure. My only criterion for choosing my next destination was that the name of the place needed to sound exotic. It was even better if I was not exactly sure where the place was located.

I was offered a position teaching math in a place called Rumbai, Sumatra, Indonesia. I did not even hesitate to accept the job as the name was perfect, and I did have to look it up on a map.

Traveling to Indonesia was one of the longest trips I had ever been on. It took me about 36 hours to fly from Buffalo to Singapore. From Singapore it was only a one-hour flight to Pekanbaru Airport on the island of Sumatra. A car from the school picked me up at the airport and on the 20-minute drive to Rumbai, I felt as if I had suddenly entered the pages of a National Geographic magazine. Along the road I saw huts on stilts, people dressed in colorful sarongs tending to their crops, and jungle all around me.

Flying through the air

The school was located in a residential community set up for employees of Caltex Oil Company. The house I was given had the most beautiful screened in patio with a gardenia bush just outside my front door. The lovely smell of the gardenia flowers filled my patio year round.

The only way to get around Rumbai was by small motorcycles so after being there only a week, someone tried to teach me how to ride a motorcycle. I did not quite understand about letting out the clutch and slowly giving the bike some gas. Instead I let the clutch out quickly, used way too much gas and managed to do a wheelie and land on my chin. I cut my chin open and had to go to the small clinic where a doctor put stitches in my chin with no anesthetic, which was not a good experience.

I was very worried about snakes as I was told they were everywhere, and in fact a King Cobra had been spotted in my backyard. So one of the teachers told me that if I put the posts of my bed in buckets of water, snakes could not get me. I did that, and gently rotted the wooden posts on my bed. Of course it would not have stopped a snake but it made me feel better. It did not stop rats either as one night at about 1 a.m. a rat jumped on my bed and bit my little finger. I ended up chasing the rat around my house, as I was certain it had rabies. I finally caught it, stuffed it into a large bottle and delivered it to the clinic for testing. It had to be sent off to a larger hospital in Jakarta, and after a week I was notified that the rat did not have rabies. The exact words were, “You will be happy to know that brain mouse no have rabies.”

Beautiful birds called hornbills lived in the trees all around the area, and in the morning I could hear them flying low near my house making the most amazing raucous calls. They were magnificent birds to look at, with huge wingspans and large, brightly colored bills.

One afternoon when I was sitting on my patio I heard the voice of my neighbor calling, “Help, help, help.” I ran to her house and was startled to find her in her bathtub, but under her house. Her house was built on stilts with an open area under the house, and that is where she ended up, sitting in her bathtub with nothing on but her shower cap. While she was taking a bath, the floor gave way underneath her and she came crashing to the ground. She was unhurt, but mortified to be sitting naked under her house. I quickly got her a robe, and then we called for help.

After I had been in Rumbai for about two years, several of the teachers at my school were invited to a party being given by the Bristow Helicopter pilots at their base in a town called Duri. Duri was about two hours away, but the road connecting the two places was a dirt road with oil sprayed on top. It was fine as long as there was no rain. Once it rained the oil turned into a hazardous surface much like ice. So I was not especially enthusiastic about going to the party. But in the end I did, and it was at the party that I met Mark, my future husband.

The following Monday when I was at school, the principal came into my room and said that there was a very nice sounding British gentleman named Mark on the phone. He was at the Rumbai heliport, and wanted to know if I would like to go for a helicopter ride. My principal encouraged me to go, and told me he would look after my class. I drove to the heliport on my Honda 90 motorcycle, and Mark was waiting there for me. He took me up for a ride in a Bell Huey helicopter and we circled over my school.  I was pretty impressed to say the least. I had several more helicopter rides after that, and a year later Mark proposed.

I was in Rumbai for three wonderful years. I will always remember the sweet smell of the gardenias, the amazing sound of the hornbills, and how rotted my bedposts were when I left!