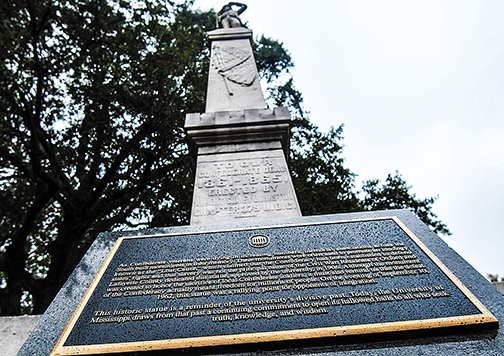 The Mississippi Sons of Confederate Veterans this week revived a lawsuit against the University of Mississippi, asking that a court order removal of an informational plaque near a Confederate monument on campus.

The lawsuit, first filed in September 2014, was transferred from the county’s chancery court and placed on the circuit court’s docket. The case had lain dormant until this week.

The group’s petition for injunction — a request that a judge issue an order that compels a party to do or refrain from specific acts — does not directly state what remedy the group seeks. Court documents show the university’s counsel perceived the petition as a request to remove the plaque.

The petition, amended this summer to include language about the plaque, alludes to the idea that the plaque does not accurately portray the historic meaning of the monument. The university had originally placed a plaque, then removed it and revised the wording after receiving input from several groups. The revised plaque was installed this week.

“The SCV requests that this Honorable Court use its broad powers of equity to … grant an injunction against the University of Mississippi, enjoining and preventing the University of Mississippi from disturbing or otherwise altering, desecrating, attacking, removing or placing any kind or (sic) plaque or placard which may in any way change, alter or disturb the significance and meaning of the Confederate Monument,” the petition states.

The lead attorney for the organization became ill shortly after the lawsuit was filed in 2014, and the suit sat dormant. The case was dismissed in May after lack of action taken by the plaintiff, but a petition for reinstatement was granted on Aug. 1.

The amended complaint, filed this fall, also asks for the name of “Confederate Drive” to be protected. That road’s name was changed to “Chapel Lane” in 2014 by university officials.

The complaint quotes a state law that declares no “monuments, memorials or nameplates (plaques)” honoring numerous wars, including the “War Between the States,” may be “relocated, removed, disturbed, altered, renamed or rededicated.” The statute is Miss. Code Ann. § 55-15-81 (2016).

The plaque was developed as a result of the university’s 2014 diversity action plan in which Confederate symbols on campus would be contextualized with historic markers. The wording on the plaque was the center of controversy for weeks after an initial draft of the language did not include any mention of slavery or that the outcome of the war led to the abolition of slavery in the United States.

After student and faculty groups on campus, including the NAACP, protested, the plaque’s language was reworded to reflect a more accurate historic depiction.

The university asked the judge to dismiss the case in May. Judge Robert Whitwell denied that request, instead moving the case to circuit court.

The university’s counsel, including Oxford attorney Cal Mayo, is preparing a response to the amended petition. Attorneys for the Sons of Confederate Veterans did not return messages Friday.