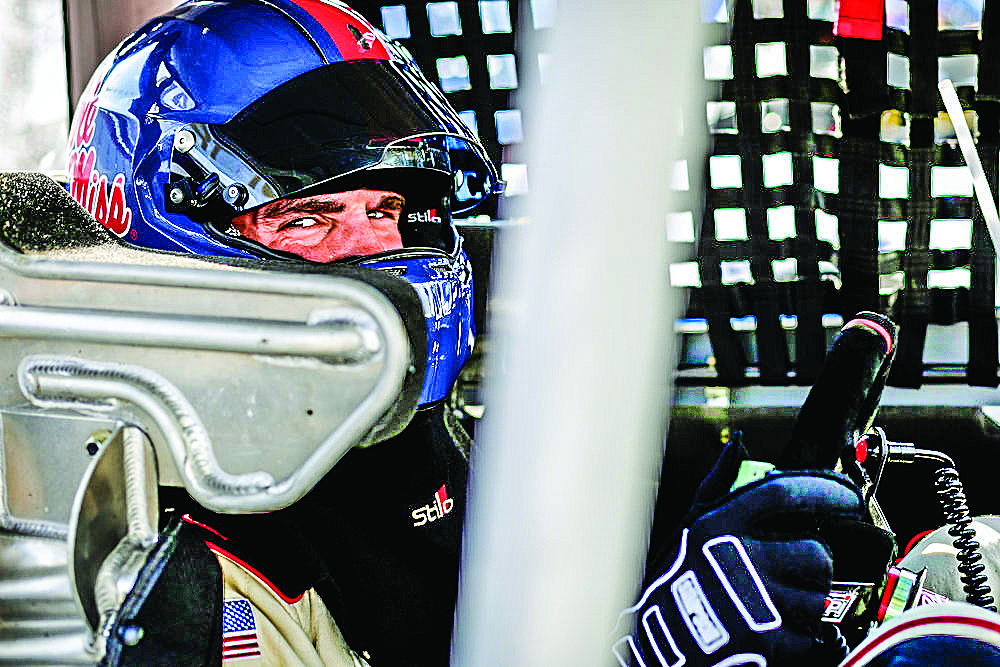 Whether growing up racing dirt track go-karts in Como or racing in NASCAR’s Camping World Truck Series, University of Mississippi alum Tommy Joe Martins is living a lifelong dream each time he’s on a track.

Dreams, however, can be good or bad – a reality Martins shares with the world through his blog, which offers a regular chronicle of how his small racing team competes with big sponsored drivers throughout the season.

After gaining regional success on the dirt go-kart tracks near his hometown of Como, Martins, 29, started racing part-time in the WKA Speedway dirt and pavement series as a teenager.

Martins had to put racing aside to finish high school and start his college career at Ole Miss. But in 2008, his father suggested they start racing again after Martins started floundering at school.

“My dad eventually decided if we were going to spend money on racing, it might as well be with NASCAR,” Martins said.

That year, he got a chance to race a 350Z in the SCCA T2 division. His NASCAR career started in 2009 where he found some success while racing at Nashville Fairgrounds Speedway.

Without a major sponsor, Martins’ family had been bankrolling his racing career, and funds were getting limited. In 2012, he returned to Ole Miss and finished his degree in journalism with the goal of covering NASCAR from the sidelines if he couldn’t be on the track.

But in 2014 he returned to NASCAR full-time and ran in the NASCAR Nationwide series, finishing with a season-best 14th place at Talladega.

Still, the year was a tough one for Martins Motorsports.

“We bought some bad cars, some of our equipment was just not what we needed and we didn’t have enough people,” Martins said. “It just failed.”

Martins took 2015 off from racing and moved to Las Vegas, where he currently still lives and works as a racing instructor at Ron Fellows Performance Driving School.

But Martins couldn’t stay away for long.

He was back on the track with the NASCAR Camping World Truck Series at the start of the 2016 season. He has a team of four and a few smaller sponsors.

Martins’ journalism background came in handy when his struggle throughout the season to contend with larger teams inspired him to write about it.

“When you’re finishing 15th to 20th place, it’s not necessarily a sexy place to finish,” he said. “They don’t talk about you on TV, so the only way to get our story out there was for me to write it.”

Martins writes after each race — telling the good, the bad and the ugly about each one.

“The blog is like our press release,” he said. “People seem to like the insight in racing and NASCAR. I went to school to do this and I feel I can best tell our story.”

Martins isn’t shy on the blog about his least favorite part of racing – the need for big sponsors to compete. With costs running around $20,000 per race, expenses add up quickly when you’re the one footing the bill.

“Doing this mostly ourselves, it limits us to get a win at that level, but at least we’re doing it on our terms,” he said. “But if we could get that one big sponsor, I feel we’d finish better.”

In his latest blog post, Martins expressed disappointment over not being able to catch a big break but also realized that the time he’s been able to spend with his father is something you can’t put a price on.

“How do you put a value on something like that?” he asked.

“Some posts are more popular than others,” he said. “But we’re getting our story out there.”

“With us, it’s just about loving to race,” he said. “I don’t have ambitions to get to the top level. I just want to find a sponsor that will allow us to keep racing. We can’t afford to spend money on frivolous things that may give other racers an advantage.”

Staying true to his roots

One thing that sets Martins apart from the other drivers in the series is his passion for Ole Miss. He’s often seen wearing a navy blue helmet with a signature script decal along the side.

Earlier this fall, when Martins returned to Oxford for a football game, he got to meet Coach Hugh Freeze.

That’s when the school offered to get his driving helmet painted like a Rebels football helmet, which he hopes to wear at his next race.

“It’s really cool to the university reach out to me and support me,” he said.

Martins admits he was a little annoyed to see Ricky Stenhouse Jr. wear the powder blue Ole Miss helmet first, but doesn’t begrudge Stenhouse any of his successes.

“He’s from Southaven,” he said. “He’s a Mississippi kid. But Ole Miss is my school.”

Martins returns to the track Saturday at Talladega and is hoping for a top 10 win.

“We’ve had a tough season so far,” he said. “It’s been an emotional year. This could be my last season if we don’t get a sponsor. We really need a good race.”

Martins’ writing can be found at tommyjoemartins.com.