Ole Miss’ offense out to regain form after off night 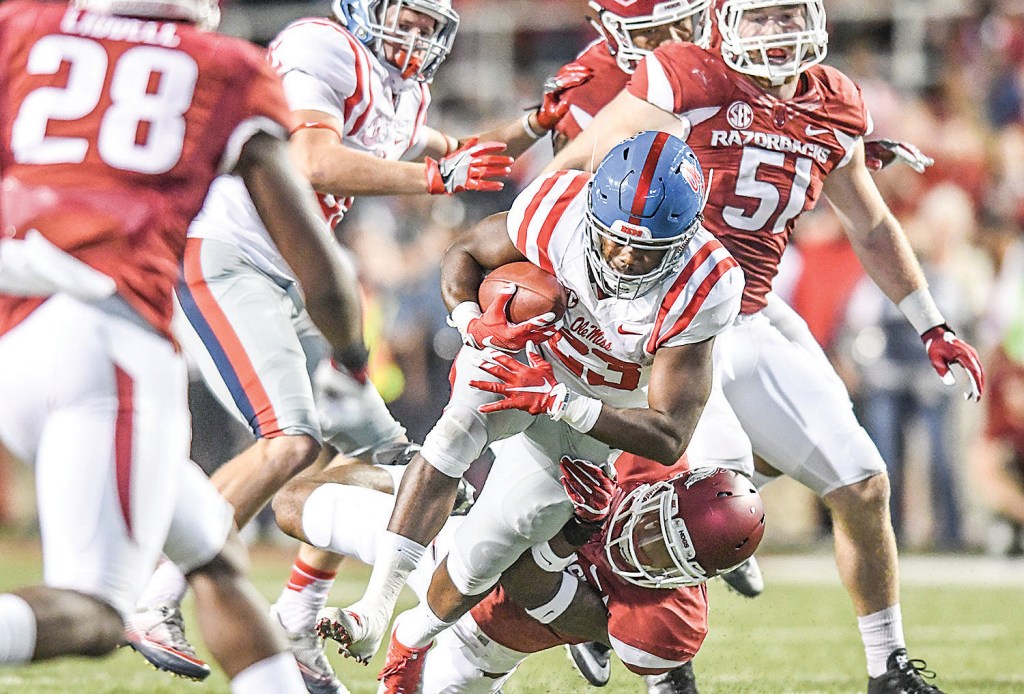 It hasn’t been unusual for Ole Miss’ defense to gives up yards and points in bunches this season.

But an offense — particularly a well-oiled passing game — not clicking as it tries to keep up? That hasn’t been the norm.

Something was off Saturday.

The 403 yards in a 34-30 loss at Arkansas were the fewest put up by the Rebels since posting just 380 in the season opener against Florida State. Ole Miss ran for just 150 yards against a Razorback defense that was yielding 180 a game while the Rebels’ usually potent air attack produced just 253 yards, easily the fewest passing yards against an FBS opponent all season.

No. 23 Ole Miss (3-3, 1-2 Southeastern Conference) went at its usual swift pace and even picked it up at times with one of its scoring drives in the first half taking just 48 seconds off the clock, but the Rebels were often out of sync. Chad Kelly, the SEC’s most efficient passer entering the game, completed less than half his attempts (18 of 39) for the first time this season with his longest completion going for just 23 yards.

Many of those incompletions were on his receivers, who developed an uncharacteristic case of the drops as the game wore on. Other times, his receivers ran in one direction with Kelly throwing in another.

“There were a couple of miscommunications,” Kelly said. “Me being the quarterback, I’ve got to own up to that and get everybody on the same page.”

The pressure was on Kelly and the rest of the offense from the start with Arkansas shredding the Rebels for 281 yards in the first half, but the defense held the Razorbacks to just 3.4 yards a play after that and just seven points in the third quarter.

But Ole Miss mustered just 129 yards in the second half despite Werner and head coach Hugh Freeze insisting the Razorbacks didn’t throw any new defensive looks at the Rebels, though there were chances for much more.

The Rebels had the ball and a 30-27 lead midway through the fourth quarter, but drops by Damore’ea Stringfellow and Van Jefferson prevented Ole Miss from possibly building on it. Another one by Quincy Adeboyejo with Arkansas leading minutes later kept Ole Miss behind the chains on its final possession.

“It was quite surprising really,” Freeze said of all the drops. “No one will feel worse about it than they do. I know they’ll come back to work. They happened at really, really critical times on critical drives that give you a second-and-1 or a third-and-2.

“I thought (the defense) played well enough to give us a chance to win it, but we never really took control of it offensively.”

Things won’t get any easier for Ole Miss this week with a night game at No. 25 LSU (4-2, 2-1) looming. The Rebels haven’t lost back-to-back games since 2014, but they’ll need the offense to look more like its old self to have a chance to keep it that way.

“We have had the ability to bounce back and go compete again,” Freeze said. “I expect nothing less.”