Ole Miss’ resolve being tested after another loss 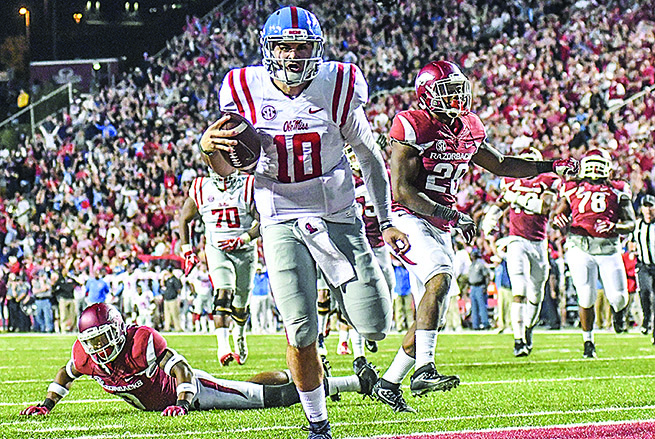 Ole Miss is having to readjust its goals.

Six games into a season that players were hopeful could end in some kind of championship, the Rebels are sitting at .500 with that title talk in all likelihood muted for good. Things don’t get any easier for No. 23 Ole Miss this week with a late-night trip to LSU looming Saturday (8 p.m., ESPN).

The Rebels (3-3, 1-2 Southeastern Conference) don’t rank any better than 74th nationally in total defense, scoring defense, rush defense or pass defense following that 34-30 loss at Arkansas over the weekend where the unit bent for much of the first three quarters and eventually broke at the end. The offense wasn’t able to bail Ole Miss out, and now the Rebels find themselves tied with the Razorbacks and Mississippi State at the bottom of the Western Division standings.

Ole Miss is 1-3 against ranked opponents, and with three more left on the schedule starting with the 25th-ranked Tigers, the Rebels’ collective back is against the wall.

Saturday’s game comes with the added intrigue of Freeze coaching against his former boss, Ed Orgeron, who went 10-25 as Ole Miss’ coach from 2005-07 but gave Freeze, who served in an off-field capacity for Orgeron at first, his first on-field college coaching job in 2006. Orgeron is 2-0 since taking over for Les Miles as LSU’s interim coach.

“I really don’t now that my career does what it does without the opportunity he gave me,” Freeze said.

LSU (4-2, 2-1) has opened things up more offensively under Orgeron, putting up an SEC school-record 634 yards in a blowout of Missouri before coming back with 45 points last week against Southern Miss. Yet it’s still the league’s fourth-best rushing attack that’s pacing the Tigers, and that’s been without star running back Leonard Fournette for much of the season.

Derrius Guice has filled in admirably with 564 yards on just 61 carries, but the 6-foot-1, 235-pound Fournette is expected to play Saturday after missing the last two games with an ankle injury — a 1-2 punch that will go right at an Ole Miss defense that ranks 12th in the league against the run.

“This will be the ultimate test for us playing against Leonard Fournette,” defensive end Marquis Haynes said.

But the Rebels have been pretty good at bouncing back under Freeze, whose team hasn’t lost back-to-back games since 2014. Ole Miss has outscored opponents a combined 196-50 following a loss since the start of last season.

Despite the record, players point to playing for themselves, the school and a top-tier bowl game as their motivation with half the season still left.

“There’s a bunch of guys who’ve handled adversity,” offensive lineman Sean Rawlings said. “The best way to move on from something like this is get ready for the next one. It’s the SEC. We’re in the grind part of the schedule. Nothing helps like getting ready for the next one, especially going down to LSU and Death Valley. I think everybody’s motivated for that.”

Said tight end Evan Engram, “Last week will not beat us this week. That’s our mentality.”

At this point, there’s no alternative.

“Finding the way to continue to motivate when those difficult losses come is certainly a great challenge, but it’s what we have to do,” Freeze said. “It’s what our university expects and what our people deserve, and we’ve got to rally and respond.”