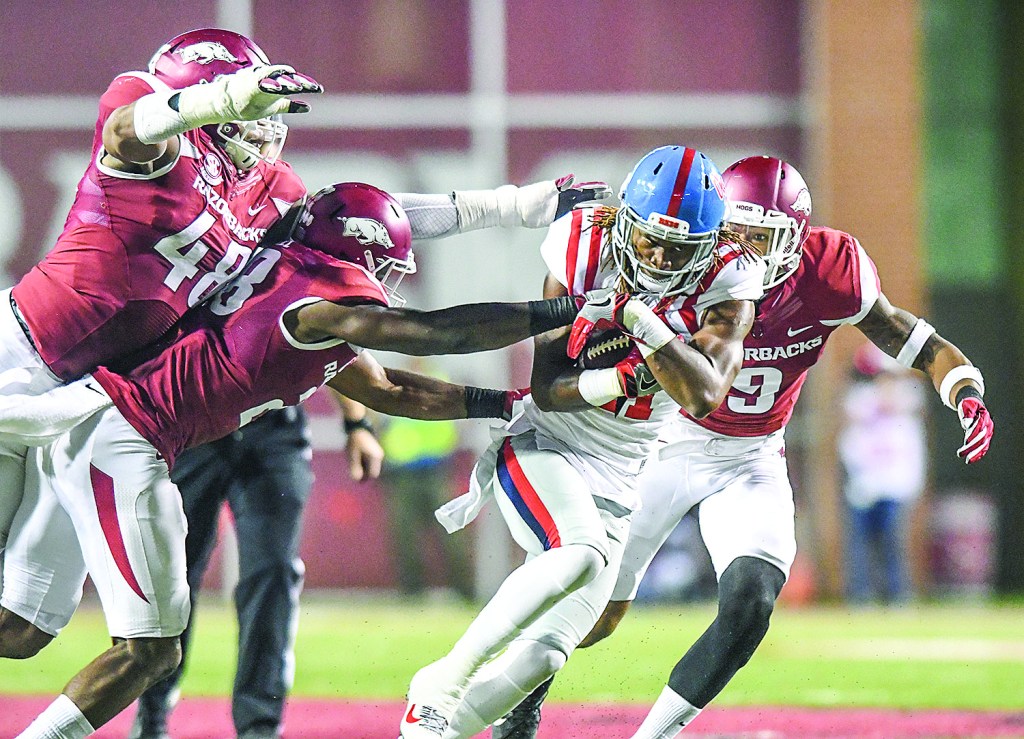 Ole Miss’ receivers don’t want to think about last week too much.

Perhaps the Southeastern Conference’s deepest and most talented unit, the wideouts made their share of plays in the Rebels’ 34-30 loss to Arkansas. But there were some they didn’t that they felt could’ve changed the outcome in crunch time.

“As a receiving corps, we just took it upon ourself that in big games like that, it’s on us to go win it,” senior receiver Quincy Adeboyejo said. “We let each other down, and we didn’t feel we did the things we could have to have won that game.”

Drops were one of Ole Miss’ issues against the Razorbacks, uncharacteristic for a team that has five players with at least 15 catches for the SEC’s top-ranked passing offense. Damore’ea Stringfellow and Van Jefferson each had one with the Rebels trying to hold a three-point lead midway through the fourth quarter while Adeboyejo dropped one on the Rebels’ final possession, and there were others here and there.

All the receivers can do, Adeboyejo said, is prepare for their next chance Saturday at LSU (8 p.m., ESPN).

“Trying to have a short memory,” Adeboyejo said. “Forget the drops. Make the next (play) pretty much.”

Said Ole Miss coach Hugh Freeze, “They were not happy after the game. If we are going to compete against LSU Saturday night, those guys are going to have to play well, and I think they know that.”

Adeboyejo expects perhaps the receivers’ stiffest test this week going up against an LSU secondary he holds in high regard.

“I think they’re the best in the SEC, in my opinion,” Adeboyejo said. “They’ve got a really good safety in Jamal Adams. A really good corner in (Tre’Davious) White. They’re really good across the board pretty much. They’re sound, and they have really good technique.”

LSU is fifth in the SEC in pass defense (208.3 yards allowed per game) and have yielded just three passing touchdowns, fewest in the league. White and Adams are both projected to be high picks in next year’s NFL Draft.

“It’s probably the best matchup we’ve seen so far this year,” Adeboyejo said. “That’s just going to get us going. That’s going to make us practice harder because we know we have a good opponent lining up against us. We’ve got bring our all.”

Freshman offensive lineman Greg Little came to Ole Miss amid much fanfare and has seen his playing time increase on a weekly basis.

A consensus five-star prospect in this year’s recruiting cycle, Little is to the point where he’s getting nearly half the snaps at left tackle each game, alternating with junior Rod Taylor. Little has had to get used to going up against more seasoned defenders just like any freshman and needs to continue to refine his technique, offensive line coach Matt Luke said, but the 6-foot-6, 334-pounder is progressing.

“Really proud of him,” Luke said. “A true freshman out there competing. He plays about half the snaps and is grading out really well. Making some freshman mistakes but really has been playing pretty good.”