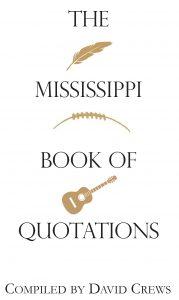 Here is a quote: David Crews is one of Oxford’s most interesting residents.

Living in Charlottesville, Virginia, as a boy, Crews met William Faulkner – while Crews was stealing apples from the Nobel prize-winning author. Later while living in Jackson,  Crews built a relationship with “Miss Eudora” Welty and brought her a copy of the New York Times every day.

Now the Oxford resident is giving us a keepsake worth reading and re-reading: The Mississippi Book of Quotations by David Crews from Oxford’s Nautilus Press. Crews will celebrate the book’s release and sign copies on Tuesday at 5 p.m. at Off Square Books.

The Mississippi Book of Quotations brings together the artistry and cadences of the world’s greatest storytellers.

As Crews says in his introduction to the book, “Mississippi, a fiercely complex land, is both mesmerizing and baffling. Our country’s most impoverished state is undeniably our richest when it comes to writing, lyrics, and stories.”

Mark Salzman, bestselling author of Iron & Silk, has expressed a wish that “this collection finds its way into every public and private library, digital reading device, and bathroom in America.”

“Reading The Mississippi Book of Quotations is like having a Who’s Who of Mississippians over for dinner and getting to hear them utter their most memorable words,” said Charles Overby, former chairman and CEO of the Freedom Forum.

Before compiling The Mississippi Book of Quotations, Oxford’s Crews has captured violent federal fugitives, earned a Phi Beta Kappa key, run forty triathlons, climbed the tallest peak in the Western Hemisphere, produced an Emmy Award-winning documentary, helped raise $2 million for a children’s hospital, worked to secure progressive education reform in the state of Mississippi, and hiked the entire 450 miles of the Natchez Trace (he is thought to be the first person to walk the trail since the 1800s).