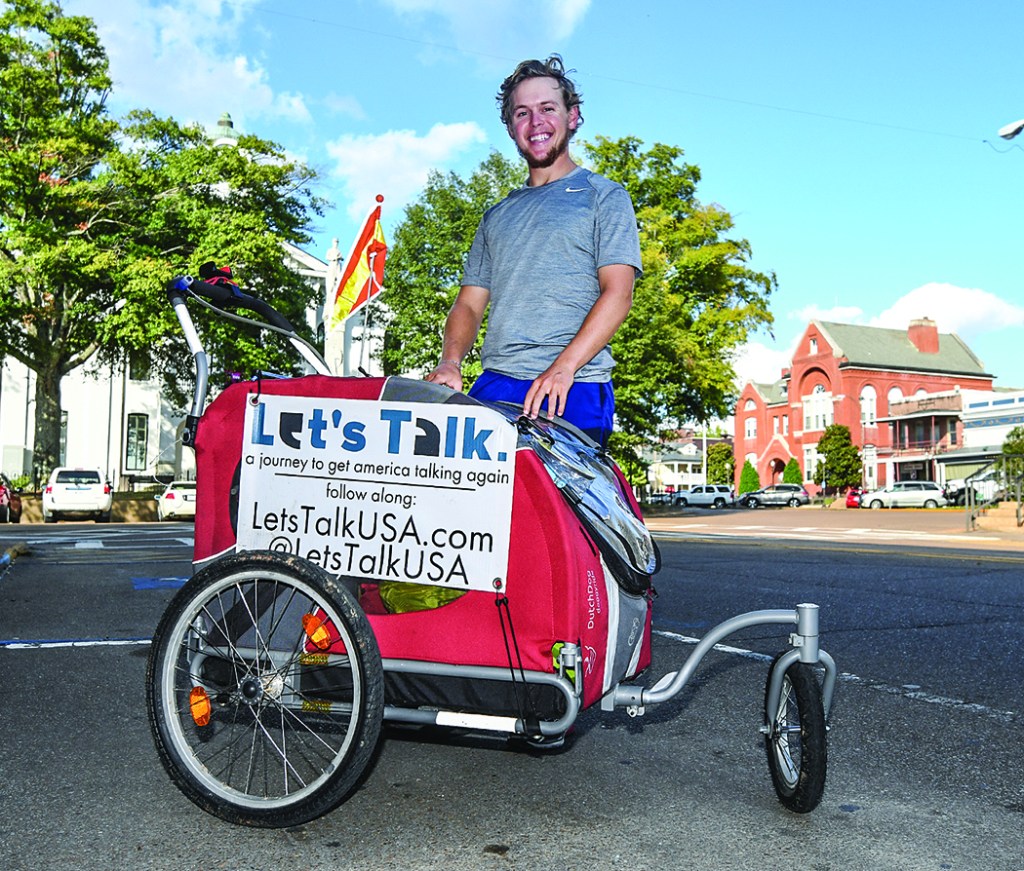 Chris Andrews, in Oxford, Miss. on Monday, October 17, 2016, is walking the United States and collecting stories from people he meets along the way.

Sitting on a bench outside of the Lafayette County Courthouse Monday, Chris Andrews was resting a bit while taking in the sights of Oxford’s historic downtown Square.

His feet have taken quite a beating lately. Since August 8, he’s walked 926 miles and his journey is far from over.

Andrews, a Michigan native, is walking 3,000 miles across the United States carrying with him a simple message – “Let’s talk.”

While attending the University of St. Andrews in Scotland where he studied business management and Spanish, Andrews started to see the effects of digital communication.

“I started to realize the way we are communicating as a society has changed drastically,” he said. “I noticed my own behavior changing. I was so consumed with what was on my phones, tablet or computer, I’ve started to lose touch with people around me. I noticed it in others as well.”

Andrews had an idea that if he started on some “crazy” journey across the United States after graduation, maybe he could grab people’s attention and use it to spread a message that people simply need to talk to each other more face-to-face.

“This isn’t about throwing away our phones or deleting social media accounts,” he said. “But there has to be a time when we put that stuff down and talk to the people around us.”

Andrews’ walk started in Washington D.C. He predicts the entire trip should take about eight months. Not only is he walking the entire way, he often stops for a day or two in certain towns where he finds people have a lot to talk about. Oxford was one of those towns.

“There’s so much rich history here,” he said. “It’s a beautiful town with a great mix of college students and native Southerners. And what they say about Southern hospitality is true, by the way. People have been amazing in the South.”

While walking through Tishomingo State Park, he happened on a couple from Oxford who invited him to a hot meal and warm bed when he made his way to Oxford. The woman works at Oxford Middle School and also invited Andrews to come speak to the school Monday.

“That was a lot of fun,” Andrews said. “I really believe this message needs to be heard by our youth because they were born into this digital era. They’re most at risk and we need to remind them there’s a balance.”

“People joke with me sometimes that I’m doing this to tell people to talk to each other and I’m using social media to spread the word,” he said. “It’s just about making time for real conversations with the people around you. If you don’t do that, you don’t learn people’s stories and everyone has a story. It’s not about unplugging completely — it’s about finding that healthy balance that improves that quality of life.

“When we move away from face-to-face and replace it with digital communication, people lose a certain level of empathy and patience and a real disconnection happens in our daily lives.”

His girlfriend, Emma Rebein, has been helping Andrews with the logistics of the trip while finishing her senior year at St. Andrews. She helps by sending care packages, managing Andrews’s website and social media accounts, reaching out to sponsors who provide Andrews with gear. While walking, he pushes a three-wheeled pet carrier filled with his sleeping bag, tent, guitar, food, water and medical supplies. On the side, there’s a sign that reads, “Let’s Talk USA,” which is what he named his project.

When he meets someone willing to talk, he interviews them and takes their photograph.

“It’s amazing the stories you hear and the things you can learn,” he said. “Sometimes, I knock on someone’s door and tell them what I’m doing and ask if I can pitch my tent on their front lawn. That opens up conversations with those people and others living on the street.”

At 22 years old, Andrews knew that if he was ever going to do something as grand as his walk across America, now was the best time to do it.

“I’m not married, and I don’t have children, and currently don’t have a job,” he said. “I’m young and healthy. The time was right.”