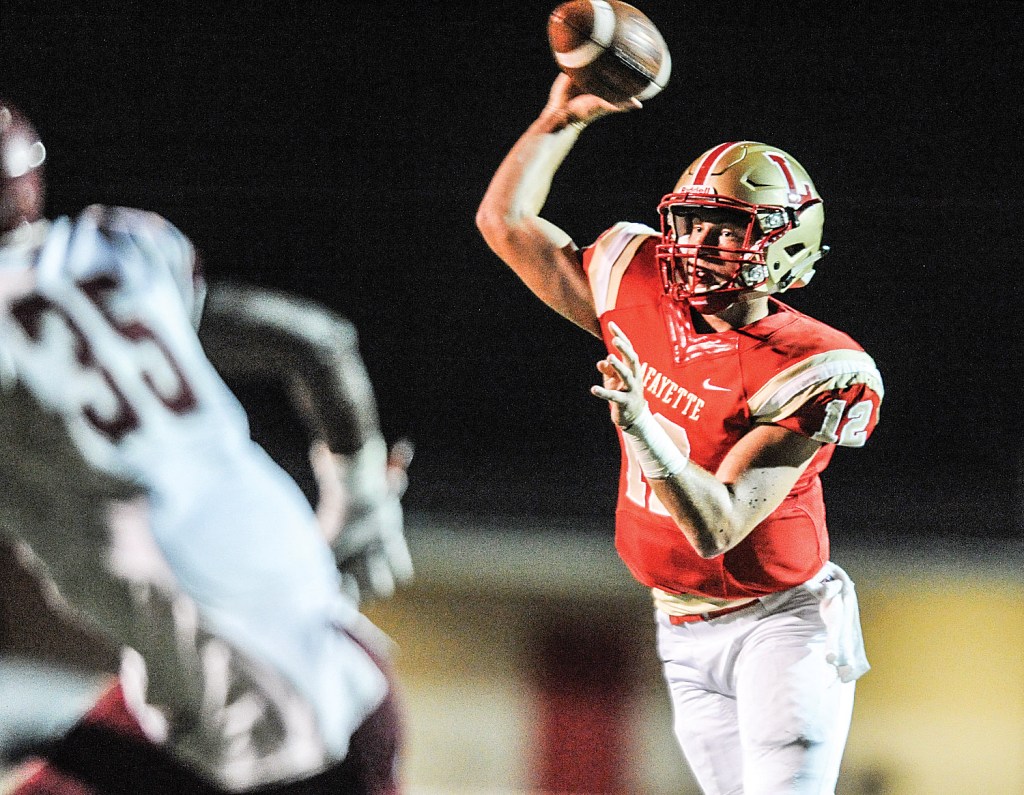 Quarterback Will Ard (12) and the rest of the Commodores can clinch the Region 2-4A championship with a win over Senatobia on Friday at William L. Buford Stadium. (Bruce Newman)

The math is simple for Lafayette.

Win on Friday night and the Commodores will become the Region 2-4A champions for the second time in three years. To do so, they will have to defeat a team first-year head coach Michael Fair is very familiar with.

Senatobia, Fair’s former team, will travel to William L. Buford Stadium (7 p.m., 105.1 FM) looking to prevent any Lafayette celebration as well as usurp the Commodores from atop the region standings.

“I’ve tried to keep up with (Senatobia) this year,” Fair said. “You like it when they do well and you want them to have success. Of course, that changes this week. …We prepare the same each week and we’re preparing the same as we have over the last several weeks for this game. There’s really not a whole lot of other time to think about the other stuff. I’m sure Friday night it’s going to be a little different. There’ll be some emotions because I know those guys and the coaches so well.”

Lafayette (6-2, 3-0 2-4A) is riding a six-game winning streak after defeating New Albany on the road last week. The Warriors (6-2, 2-1) are coming a victory over Byhalia. Preparing for this week’s matchup was surreal for Fair, who knows Senatobia and their players very well having coached them the previous two seasons.

Knowing who the players are helps with Fair telling his defense who to prepare for and who his offensive line must defend, but it is also an interesting dynamic for Fair as he watched the game film on Sunday.

“It’s a little different just because you know them so well,” Fair said. “(Senatobia) changed some things with the new coaches coming in. It’s not like they’re doing the exact same thing we were doing last year. It hasn’t really been easier. You kind of know some of the strengths of some of the players but that’s about it.”

Last year when the two teams met in Senatobia, there were near identical region championship and postseason seeding implications on the line. It was a tight game for 48 minutes with Senatobia eeking out a 20-19 victory, claiming the 2-4A title.

“That was a great football game,” Fair said. “Both sides played really hard, and we were just able to make one more play than they did at the end. … It was a championship atmosphere last year, and I kind of expect it to be the same this year.”

The Warriors are down to their third-string quarterback as sophomore cornerback Jarrius Harris has taken over after Senatobia lost their two true quarterbacks to injury. Harris took over in the second half of the Warriors’ 63-10 win over Water Valley. His speed and athleticism on both sides of the football are something Fair is very well versed in.

“(Harris) is a great athlete and played JV for us last year,” Fair said. “I’m familiar with him and his skill set. He’s not a typical third-string quarterback. He’s an athlete.”