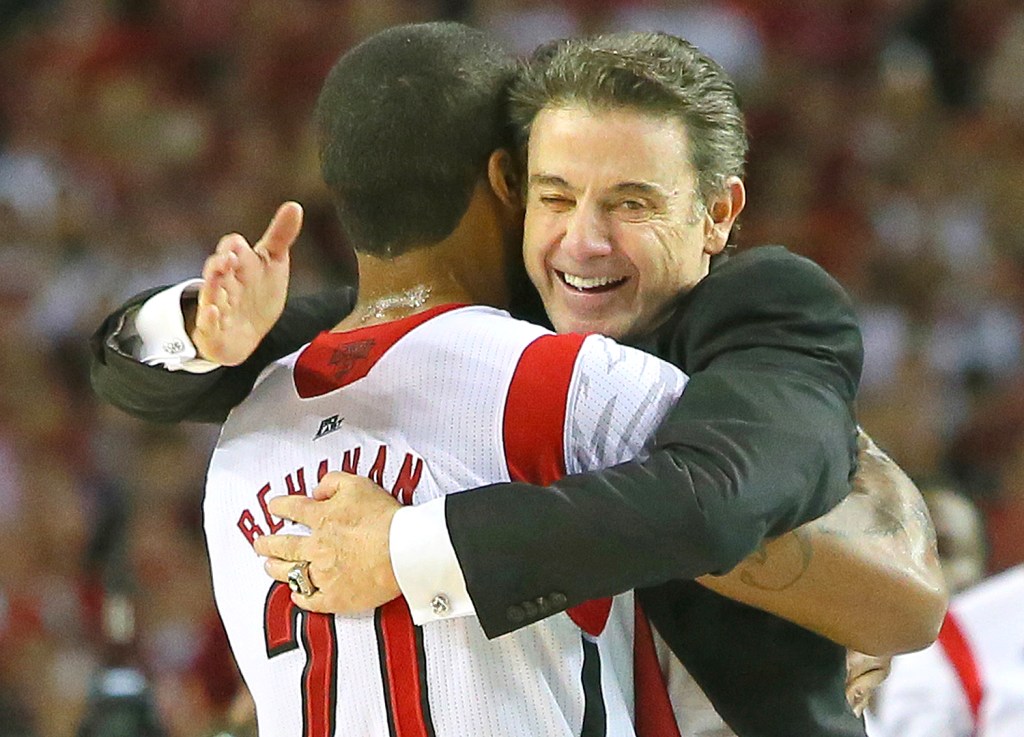 Louisville forward Chane Behanan embraces head coach Rick Pitino, who gives him a pat on the back after defeating Michigan to win the NCAA Division I National Championship on Monday, April 8, 2013, in Atlanta. (AP Photo/Atlanta Journal Constitution, Curtis Compton)

LOUISVILLE, Ky. — The NCAA accused Louisville of four serious violations and criticized the conduct of coach Rick Pitino for failing to monitor a former basketball staffer who hired escorts and strippers for sex parties with recruits and players.

The governing body’s report Thursday did not mention a lack of institutional control — considered the most serious violation in some cases.

Pitino disputed the finding that he did not monitor Andree McGee, saying his tendency is to over-monitor. If anything, the coach said he was guilty of trusting someone to tell him what was going on.

“This man (McGee) made a mistake and we apologize for his mistakes,” he said during a news conference. Pitino has denied knowledge of the alleged violations.

The NCAA’s letter is the first step in a process that could extend into next spring. Louisville has 90 days to respond.

The letter culminates an inquiry that began with the publication last October of Katina Powell’s book, “Breaking Cardinal Rules: Basketball and the Escort Queen.”

Powell wrote that McGee paid her $10,000 for strippers to perform 22 shows from 2010-14 — a period that includes Louisville’s NCAA 2012-13 championship season — with many occurring in the players’ Billy Minardi Hall dormitory. The building is named for Pitino’s brother-in-law, who died in the Sept. 11, 2001, terrorist attacks in New York.

Compliance consultant Chuck Smrt, hired by the school to investigate the allegations, said he did not think vacating the title was “appropriate” based on precedent.

The NCAA’s letter lists the value of the impermissible/extra benefits as at least $5,400 and cites multiple instances in which McGee hired strippers to dance and have sex with recruits.

Louisville already has imposed its own penalties. The most severe one was announced Feb. 5 — a postseason ban after the school determined violations occurred. A month later, the school announced the reduction of two scholarships and the number of days staffers could recruit.

Neville Pinto, the university’s acting president, and athletic director Tom Jurich said the NCAA’s findings align with the results of the school’s investigation. He said the school would fight the charge against Pitino.

“Improper activities took place in a dormitory that never should have occurred,” they said in a statement. “When the facts were established, we acted. We took appropriate punitive and corrective actions. The penalties we imposed were among the most severe penalties ever self-imposed by a NCAA member.”

Those self-imposed penalties were taken as a way of possibly lessening NCAA discipline and follows measures used by Syracuse and SMU. NCAA punishment went further in those cases, with nine-game suspensions each this past season for Hall of Fame coaches Jim Boeheim and now-retired Larry Brown.

It remains unclear if the NCAA will take the same step with Pitino. Jurich made clear the school’s intent to defend the allegation and show-cause order against Pitino and said he could not have known what occurred in the dorm because “if he caught a whiff of what was going on, there’s no question he’d hit the roof.”

Jurich went further in the school’s planned defense of the coach, saying “we don’t agree with it and we will dispute it.”

The NCAA’s 20-page letter dated Oct. 17 alleges that McGee provided benefits to at least 17 recruits and players, two “non-scholastic” coaches and one friend of a prospect during that period. Names of the players were redacted in the report.

McGee did not cooperate with NCAA investigators and is subject to a show-cause order for two violations. McGee’s attorney, Scott C. Cox, had no comment.

Smrt said the “vast majority” of the activities occurred with prospects on official or unofficial visits at Louisville. He declined to say how many eventually enrolled at the school, adding “that would be getting into the specifics of the case.”

Lawyer Steve Thompson of Nixon Peabody, the firm hired by the school as outside counsel, said the violation is unrelated to the core allegations. Pitino said Williams had no relationship with McGee.

The action by the NCAA has cast a shadow over one of the country’s most prominent basketball schools and led to several investigations, including ones by the Louisville police department and the Commonwealth’s Attorney’s Office. Pitino has said in recent interviews he believes Louisville’s self-imposed penalties suggested by the compliance consultant should be enough to satisfy the NCAA.

Jurich reiterated the program’s steps to address the allegations from the moment the school became aware of them. He and Pitino also said the program has taken additional measures to improve security and compliance to ensure the violations aren’t repeated.

For now, the school must prepare its defense before waiting to see what the NCAA’s final word will be.