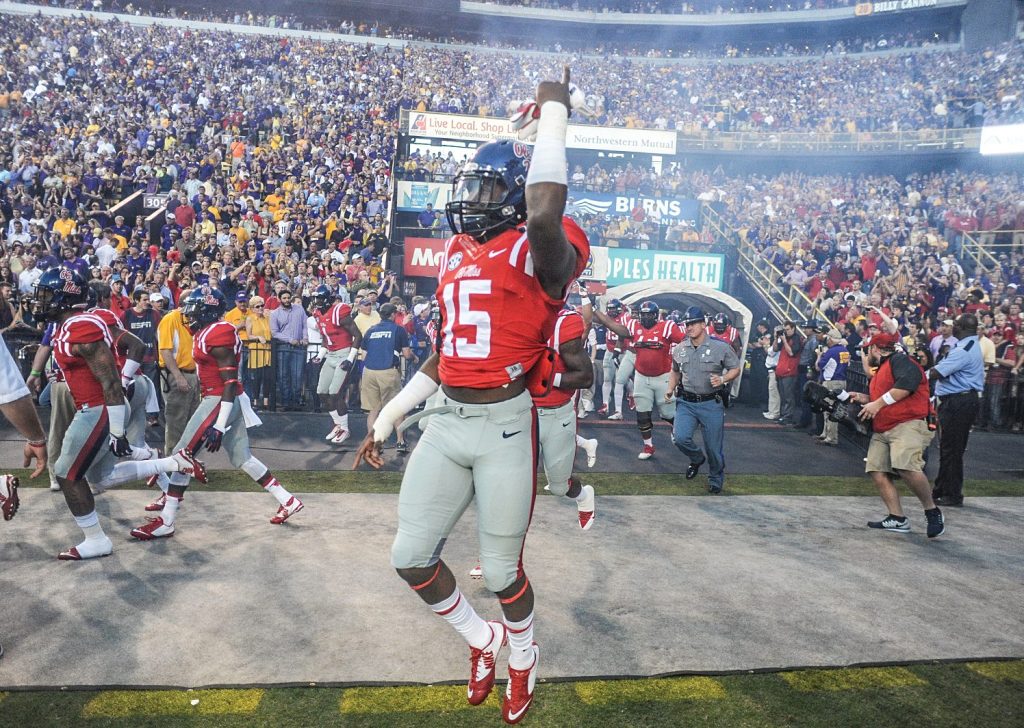 Ole Miss defensive back Kendarius Webster (15) and the Rebels take the field for a night game against LSU at Tiger Stadium in Baton Rouge, La. on Oct. 25, 2014. Ole Miss will return to Death Valley for an 8 p.m. kickoff Saturday. (Bruce Newman)

And rarely do opponents get out alive at night.

It’s a fitting description for what’s proven to be one of the nation’s best home-field advantages. Life on the road in the Southeastern Conference is always tough, but it goes to another level for the opposition playing in front more than 100,000 fans in Baton Rouge when the sun goes down.

The 23rd-ranked Rebels are LSU’s next opponent under the lights at home with Saturday’s kickoff set for 8 p.m. on ESPN. The 25th-ranked Tigers (4-2, 2-1 SEC) are 68-6 in home games played at night since the turn of the century and haven’t lost a game at home that started at 8 p.m. or later since 2002.

All four of LSU’s home games this season have been played at night with the Tigers winning them by a combined score of 144-50. The level of competition has had something to do with that — Jacksonville State is an FCS program while Mississippi State, Missouri and Southern Miss are a combined 8-11 — but Ole Miss’ players know first-hand what they’ll be dealing with come Saturday night.

“It’s definitely different,” senior receiver Quincy Adeboyejo said. “It’s loud, and it gets to you. … It’s one of the harder places I’ve played at since I’ve been here.”

Two years ago, the Rebels (3-3, 1-2), then undefeated and ranked third in the country, traveled to Tiger Stadium for a night game against a two-loss LSU team only for an offense that was averaging nearly 30 points a game to be held to seven in a 10-7 loss despite Ole Miss finishing plus-3 in the turnover margin.

“We went in there thinking the win would just come, and it didn’t,” Adeboyejo recalled. “It’s something we can’t go in doing this year. We’ve got to go in and execute every play every time we get a chance.”

Teams find that’s easier said than done against LSU at its place with the Tigers feeding off the energy level of 102,321 fans that have had all day to marinate.

“To be honest, LSU is the craziest night game that I’ve ever played in in my life because it’s like once you start off, you’re up and then after halftime you come out there, it’s like it’s a whole different LSU team that you’ve never seen before,” defensive end Marquis Haynes said.

Starting fast would help the Rebels’ chances as they try to avoid falling below .500 for the first time this season, something they didn’t do at Arkansas last week in having to erase an 11-point deficit in the first half before falling late. Chad Kelly and the SEC’s top-ranked passing offense are averaging nearly 40 points a game, but they’ll take on an LSU defense that’s yielding just 14 points a game and has allowed just three passing touchdowns.

“It is a larger crowd than you face at a lot of places,” Ole Miss coach Hugh Freeze said. “I don’t know what the stadium holds there now, but they are passionate fans. They are into it because they pull for their team, and when it is hard to communicate and hard to hear, they give extra energy to the home team that always makes it difficult on the road in this conference.”

The Rebels are ready to give it their best shot.