Lafayette holds off Senatobia for 2-4A championship 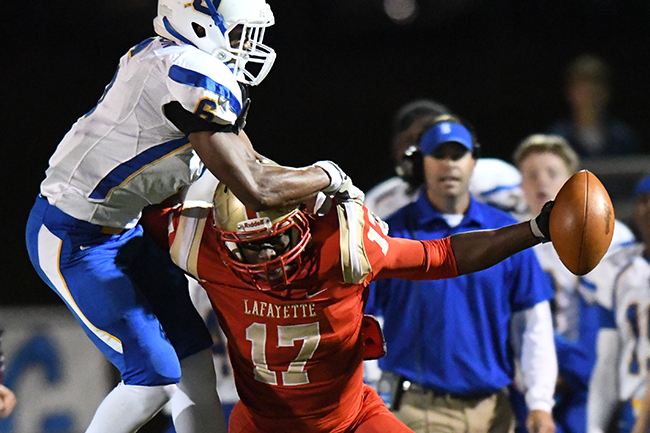 It was a tough week for Lafayette head coach Michael Fair.

The first-year head coach was preparing his team for their game against Senatobia, which has region championship implications riding on it. That was not the biggest obstacle Fair had to overcome as he was also preparing to coach against a group of players that he coached for the past two seasons, including last year’s 20-19 win over Lafayette for the 2-4A title.

Fair was once again on the winning side of a region championship for a second straight season, though he was standing on a different sideline ans Lafayette defeated Senatobia 17-14 on Friday night at William L. Buford Stadium. It was the Commodores’ (7-2, 4-0 2-4A) seventh straight win and second region title in three years.

“I knew it’d be emotional and be a tough night,” Fair said. “There’s no bond like a coach and a player. There’s nothing like it. …It’s just something that different than anything in this world. Once you get that and have those relationships, it’s tough.”

After the first 24 minutes of play, the score was tied 0-0 heading into the locker room. Though, it was not for lack of scoring opportunities. Lafayette got in their own way multiple times in the first half, including the opening drive which saw Lafayette attempt to convert a 4th & 4 at the Senatobia 35 only to have quarterback Will Ard go backwards four yards for a turnover on downs. Later in the half the Commodores had a prime chance to strike first, sitting at the Senatobia three yard-line facing a 3 & goal. Instead, running back Jamarcus Quarles fumbled the ball into the end zone and Senatobia recovered for a touchback.

“I thought we had great plays called,” Fair said of his offense’s first half performance. “We just couldn’t punch it in. The defense gave us the ball down there in the red zone and fumbled it at like the one inch line. Those are issues we got to eliminate before we make this playoff run. So, we’ve got some work to do.”

Lafayette’s defense kept Senatobia off the board in the first half by forcing two punts, snagging two interceptions and Tyler Williams blocking a 34-yard field goal attempt, which would have put Senatobia up 3-0 late in the second quarter.

If the first half was about mental mistakes and a defensive struggle, the second half was anything but. Three plays in the third quarter, Senatobia (6-3, 2-2) scored on a 77-yard pass from quarterback Nigeria Young to receiver Travis Tucker to make it 7-0 Warriors less than 90 seconds into the second half. After a punt on their opening possession of the half, Lafayette responded on their second drive with a seven-play possession capped by a 34-yard touchdown pass from Ard to Dillon Woods to tie the game at 7-all midway through the third.

The points kept coming as the Commodores capitalized off a Senatobia fumble with a 24-yard field goal by Robbie Langley, giving Lafayette a 10-7. The see-saw scoring continued as the Warriors responded 10-play drive of their own which ended with a three-yard run by Deanta Sipp, giving Senatobia a 14-10 lead with 9:39 remaining.

It was Senior Night for Lafayette and perhaps one of the most important and underrated seniors for the Commodores stepped up and took over the game when it mattered most on Friday night. After Senatobia retook the lead, Tay Tay Owens made sure it did not stay that way for long. The senior returned the ensuing kickoff 85 yards for what would become the game-winning touchdown.

Owens was not finished as the senior plays on both sides of the ball as was out on defense the very next possession. With Senatobia driving and inside the Commodore 40, Young threw a pass down the middle which found Owens awaiting arms at the Lafayette 28 yard-line. The Commodores had to punt the next possession and relied on back-to-back sacks to seal the game but Owens’ two key plays put Lafayette in the position to win.

“Tonight we showed our mental toughness and how to finish a game,” Owens said. “I know my role and on defense it’s to make plays. They got me back there for a reason and I know my guys have my back. So, I did my job and they did theirs.”

Lafayette will close out the regular season at Byhalia on Friday