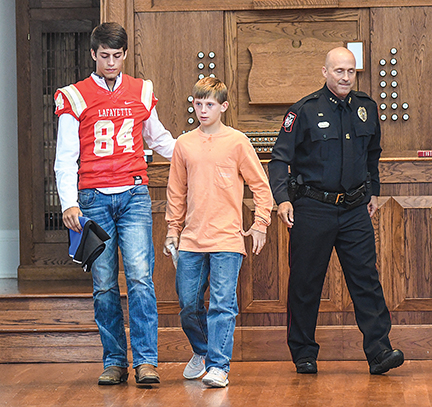 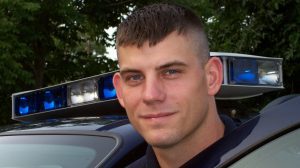 Ten years after his death, family and friends still bear the pain of losing their loved one too soon.

Ten years after his death, the LOU community still remembers his sacrifice and his smile.

Langley, 30, was killed on Oct. 21, 2006, after being dragged 200 yards by an Ole Miss student during a traffic stop. The student, Daniel Cummings, pleaded guilty and was sentenced to 20 years in prison.

On Friday, friends, family and law enforcement officers from several agencies gathered in the Paris-Yates Chapel on campus to remember and honor Langley and the family he left behind.

Lafayette County Sheriff’s Deputy Lynn Webb worked with Langley at the UM police department. During the ceremony, she spoke about Langley’s dedication to his work, his family, God, and his friends.

A few days before he died, Webb and Langley were patrolling campus when they noticed the baseball stadium was unlocked. For the next two hours, they turned on the pitching machine and took turns trying to get home runs.

“He never came to work with a frown on his face,” she said. “He had fun with everybody he worked with. He wanted us to be a family.”

Langley graduated from Madison Ridgeland Academy, Madison in 1995. After graduation, he attended Valley Forge Military College in Valley Forge, Pennsylvania for one year, and then transferred to Delta State University. At both Valley Forge and DSU he played football as a running back. Later, he received his mortuary science degree from Northwest Community College.
Following a brief career in the funeral business, he went to work for the University of Mississippi Grounds Department for several years. In April of 2002, he began his career in law enforcement with the UPD. In February of 2005, he was called to active duty with the 114th Battalion from New Albany. He served his country for 14 months in Afghanistan and upon returning from the middle east he rejoined the UM Police Department where he was then promoted to the K9 Unit.
When England’s Prince Edward visited the Ole Miss campus in 2005, Langley was chosen to be his personal bodyguard, a task he took seriously and was proud to do, according to Oxford Police Major Sheridan Maiden, who also worked with Langley when he worked at the UPD prior to moving over to OPD.

“We had a lot of good times, a lot of quality times, together,” Maiden said, before addressing the law enforcement officers attending the ceremony. “None of us know that time when we will end our watch. Take the time to look at your fellow officers and let them you know care about them and let them know you’re there for them.”

Tim Rutledge, the director of Mississippi Law Enforcement Alliance for Peer Support, was the keynote speaker. He helped Langley’s co-workers deal with their grief after his death.

“I know when Robert walked past the gates of heaven they clapped,” he said.

The university recognized Langley’s widow, Lisa Langley Robertson, and his two sons, Robert Jr. and Cory and presented them with a banner with the words, “A hero remembered never dies.”

Robertson thanked everyone at the ceremony for remembering Robert 10 years after his death and challenged them to spend time reflecting on their own lives.

“Robert was a loving father, a great friend, a soldier, co-worker and a dedicated police officer,” she said. “Today, I challenge you to do some self-reflecting on how you want to be remembered as a father, a husband, a friend or even a co-worker. If you’re not completely satisfied, you still have time to write your story.”

Langley Jr., a junior at Lafayette High School, spoke of reading Jon Gordon’s “The Energy Bus,” a story of a man down on his luck who learned how to turn things around through the positive advice by a bus driver.

“My father made an impact,” he said. “And I guarantee you, from what I’ve heard, he had positive energy on his bus.”