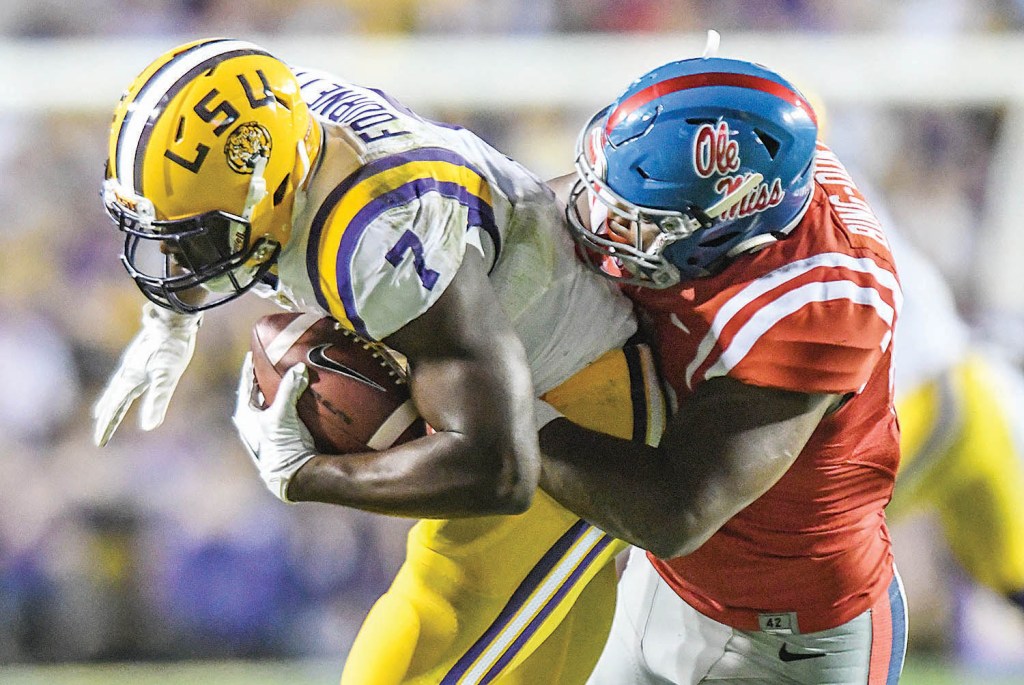 Etling gives it right back trying to get a pass to Chark on third down. Derrick Jones cut underneath for the interception, the Rebels’ third takeaway tonight.

Kelly is intercepted for the second time tonight, this one by Duke Riley. LSU in business at the Rebels’ 25.

Ole Miss goes three and out again. The Rebles have 18 yards this quarter.

Fournette is now at 253 rushing yards, an single-game record for LSU. But he didn’t score on this drive. Colby Delahoussaye with a 44-yard field goal to extend the Tigers’ lead. LSU 31, Ole Miss 21, 8:27/3Q

LSU with two sacks to kill Ole Miss’ next drive. LSU has it back at its 37.

Ole Miss goes three and out on its first series of the second half, and Fournette needs just one carry to put LSU back on top. His third touchdown goes for 78 yards. He’s now at 249 yards on seven carries. LSU 28, Ole Miss 21, 13:38 3Q

HALFTIME: Ole Miss 21, LSU 21. LSU has 287 yards compared to the Rebels’ 221, but the two turnovers forced by Ole Miss are keeping the Rebels in this one.

Akeem Judd punches it in from 2 yards out on third and goal. Unsportsmanlike conduct on LSU’s Arden Key after the play. Ole Miss thinking about going for the two-point conversion with the ball two yards closer. The Rebels do go, and Kelly runs it in to tie the game. Ole Miss 21, LSU 21, 0:11 2Q

Marquis Haynes with a strip sack of Etling. Jaylen Jones recovers for Ole Miss at LSU’s 9. It’s the Rebels’ second forced turnover of the night.

Ole Miss gets to LSU’s 5, but a run goes nowhere and back-to-back passes to Evan Engram fall incomplete. The second one went through Engram’s hands. That was a problem for all the receivers last week. Wunderlich’s 22-yard field goal gets the Rebels closer. LSU 14, Ole Miss 13, 7:11 2Q

Kelly gives it right back on a bad underthrow. Picked by Donte Jackson. LSU has it at its own 3.

Victor Evans puts a lick on DJ Chark on an end around, causing a fumble. It’s recovered by Marquis Haynes at LSU’s 35. Rebels with good field position.

Ole Miss punts for the first time, and LSU is driving after a 22-yard completion to Fournette to end the first quarter.

Ole Miss, already at 108 yards, is driving at LSU’s 24. Backup QB Jason Pellerin makes his first appearance. Kelly comes back in and is pressured on third down. His throw to Akeem Judd loses 3 yards, but Gary Wunderlich extends the Rebels’ lead with a 46-yard field goal. Ole Miss 10, LSU 0, 4:48 1Q

Ole Miss’ defense playing well early. Derrick Jones all over Danny Etling’s screen pass to DJ Chalk, who loses a yard on third down. LSU has netted 11 yards on its first six plays.

Ole Miss strikes first on Chad Kelly’s 15-yard touchdown pass to Van Jefferson, who cut across the field to do most of the work on that one. Big play on that drive was a 40-yard completion to Damore’ea Stringfellow on third down to get the Rebels deep into LSU territory. Ole Miss 7, LSU 0, 10:52 1Q

LSU throws on the first two plays. Rebels stop Derrius Guice for no gain on third down. LSU punts. Ole Miss will start at its 23-yard line.

LSU wins the toss and elects to receive.

DE Fadol Brown is dressed out and going through warmups for Ole Miss. Brown (foot surgery) hasn’t played since the season opener. If he can give it a go, that would be big for Ole Miss’ struggling run defense against Leonard Fournette (who’s also fully dressed out) and Derrius Guice.

Freshman RB D’Vaughn Pennamon (hamstring) is also dressed out, though that didn’t mean anything against Arkansas a week ago.

We will have live updates and updated score tonight throughout the game so bookmark this page and return back tonight at kickoff.

LSU interim coach Ed Orgeron has deflected questions about his past at Ole Miss this week.

He’s dismissed story lines revolving around his opportunity to beat the program that gave him his first head coaching job in the Southeastern Conference, and which fired him after three losing seasons.

“That’s the furthest from my mind,” Orgeron insisted as 25th-ranked LSU prepared to host No. 23 Ole Miss on Saturday night. “This is about the LSU Tigers.”

Orgeron coached the Rebels from 2005-2007, when he hired an assistant named Hugh Freeze, who is now Ole Miss’ head coach.

“That was a long time ago,” Orgeron said. “That’s far from my memory, I promise you.”

Be that as it may, it doesn’t change the fact that Orgeron, a Louisiana native, can’t really afford a loss to Ole Miss (3-3, 1-2 SEC) if he wants to keep a job he has long coveted.

Fortunately for Orgeron, LSU (4-2, 2-1) has ample talent and seems to have hit its stride in the two games since he took over for Les Miles, who was fired in late September. The Tigers trounced Missouri 42-7 and demolished Southern Mississippi 45-10. Odds makers have listed LSU as the favorite by nearly a touchdown.

“They have, in the last few weeks, offensively put up a lot of big numbers,” Freeze said. “We are playing one of the better teams in the country this Saturday night and it is a great opportunity.”

Led by quarterback Chad Kelly, whose 308.2 yards passing per game leads the SEC, Ole Miss hasn’t had trouble scoring. But the Rebels’ defense has struggled at times, giving up 34 or more points in all three losses.

“They are not as stout as they’ve been in the past,” Orgeron said. “But I know this is a game they’re going to want to be playing very well.”

While three losses makes Ole Miss a long shot to get back into the SEC title race, Kelly asserted that the Rebels remain highly motivated.

“We’re playing to win every single game regardless of the outcome of the game before,” Kelly said. “I hate to lose and so do those guys in the locker room.”

LSU and Ole Miss have played 104 times since first meeting in 1894. Here are some of the sub plots of their 105th clash.

FOURNETTE’S FORM: LSU running back Leonard Fournette practiced this week for the first time since aggravating his left ankle injury on Sept. 24 and looks ready to play again. But LSU doesn’t want Fournette’s return to marginalize Derrius Guice, who has rushed for at least 155 yards in each of his three starts in place of Fournette. “We want to rotate our guys, we want them to keep fresh. It might be a possibility of putting them both in the backfield at the same time,” Orgeron said. “They’re both outstanding.”

TOUGH SCHEDULE: Ole Miss has played one of the most difficult schedules in the nation this season, which is a big reason the program is still in the national rankings despite a 3-3 record. LSU is the fifth nationally-ranked opponent the Rebels have faced in seven games. The Rebels had a 1-3 record against ranked opponents, losing to Alabama, Florida State and Arkansas and beating Georgia.

STINGY DEFENSE: Under first year coordinator Dave Aranda, LSU’s defense has allowed only six touchdowns this season. “They’re athletic, they can run, they can hit. They do a lot of good things. That’s what they’re known for: their defense,” Kelly said. “We’ve just got to stick to what we do: Go fast.”

THE BOUNCE BACK: Ole Miss has a 7-1 record over the past three seasons when bouncing back from a loss, including a 2-0 mark so far this season. Freeze on trying to win against LSU after losing to Arkansas last week: “It won’t be done just because I come to work and say we are fixing to bow up and get it done. It is going got take a collaborative effort from a lot of people and a lot of kids.”

HARDWARE: Since 2008, the winner of this border state rivalry game has been presented with the Magnolia Bowl trophy, with each team winning it four times. Mississippi won it at home in Oxford last season.