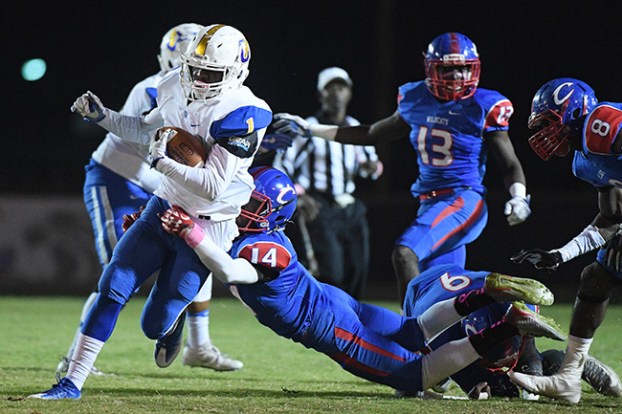 CLARKSDALE- Friday night in Clarksdale was the scene for a Region 1-5A clash between two very talented teams. The Clarksdale defense, known for keeping their opponents from scoring was up against an Oxford team that had nothing to lose and came up big during the game, delivering blow after blow to keep the Wildcats at bay for a 27-13 win.
Oxford’s defense also managed to hold Clarksdale to just two scores while causing multiple turnovers in key situations.
“Our defense played outstanding. We gave them a short field twice but we practice those situations. We try to teach our guys overcoming adversity so they know how to react when it comes in the game.” Oxford Head Coach Chris Cutcliffe said about his defense and teams work ethic after the game.
The Chargers (6-3, 4-1 1-5A) managed to hold the Wildcats to 13 points in the first half and scoreless for the rest of the game. An impressive feat against a team that has a proven track record of offensive success.
The first half was all about Oxford quarterback John Reece McClure. He tossed a 16-yard touchdown to Joe O’Keefe early in the game and a 41-yard pass to Jaquan Webb for the second Charger score, putting them up 13-7 against the Wildcats. Clarksdale (7-3, 3-2) would tie up the game with a 15-yard pass from quarterback Terrence Humphrey to Ahkenaton Furdge to tie the game up with 8 minutes before halftime.
The second half consisted of truly “outstanding” Charger defense, forcing four turnovers throughout the half. Not only did the Charger defense have a great game, the offense, specifically Hiram Wadlington, kept the clock running through hard running and impressive elusiveness to keep drives alive.
Wadlington finished with 118 yard on 24 carries including a go ahead touchdown with 7:54 left in the third quarter. The rest of third quarter saw a few interceptions from both teams but ultimately no scoring. It wasn’t until a little over two minutes in the fourth quarter did a big 20 yard gain from Wadlington set up a pass from McClure to Joe O’Keefe, his second of the day and cementing a huge victory for the Chargers.
The last drive being a personal bright spot of the game for Coach Cutcliffe, “I was really proud of that last drive offensively. We were up seven and put together a long drive that ate a lot of the time on the clock, and they finished the game exactly how I wanted them too.”
Oxford returns home next Friday to host Center Hill on Senior Night at Bobby Holcomb Field.

Rumors of Water Valley’s season being over might have been greatly exaggerated. The Blue Devils ended a seven-game losing skid... read more