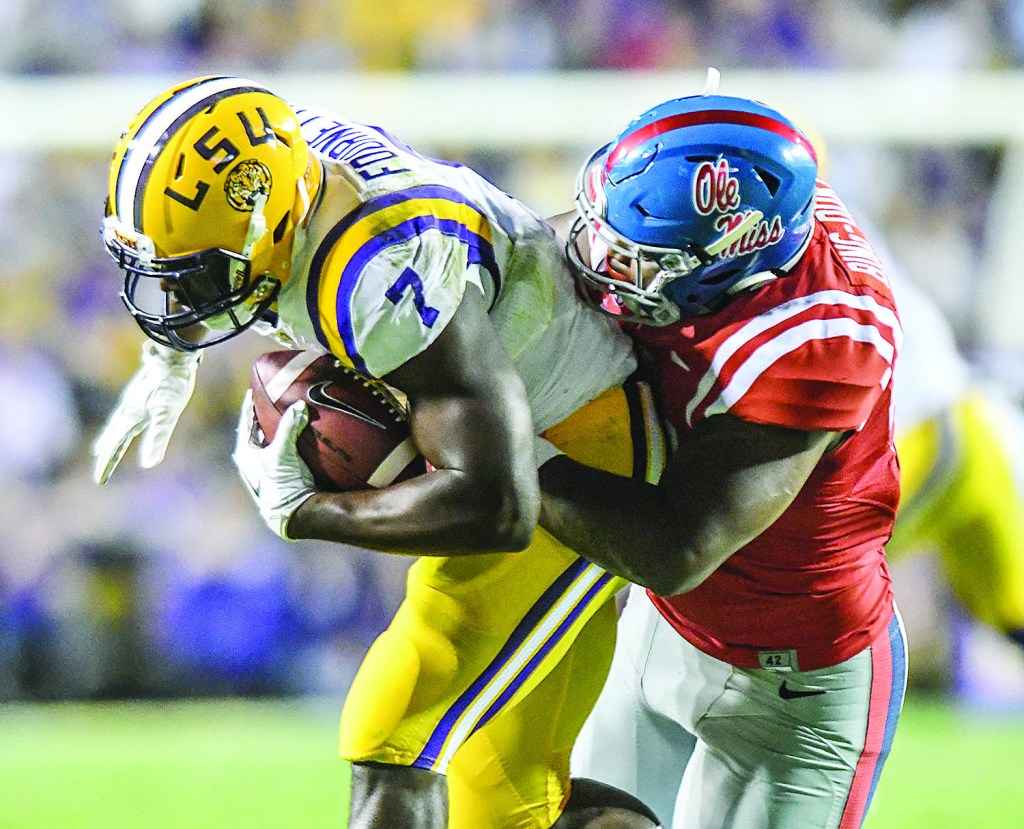 BATON ROUGE, La. — Leonard Fournette had not played in LSU’s previous two games. Unfortunately for Ole Miss’ defense, No. 7 did suit up on Saturday night. The Tigers’ running back had a career and program-best night inside Tiger Stadium, rushing for 284 yards and three touchdowns on 16 carries. He averaged 17.8 yards a carry.

The total is the most by an LSU running back since Alley Broussard ran for 250 yards in 2004, against Ole Miss.

The night started off much differently for Fournette and the Rebel run defense as his first touch resulted in a 1-yard loss on a tackle by Detric Bing-Dukes. Fournette’s next five carries in the first half resulted 249 yards and two touchdowns. The two touchdown runs were lengths of 59 and 76 yards.

“(I saw) a lot of great things for seven plays out of ten plays and then three that were not fit properly or misaligned,” Ole Miss head coach Hugh Freeze said of his defense against the LSU running attack. “You’ve got to give (LSU) credit, too. Sometimes they block you. But, it shouldn’t be 70-yard runs. They’re very good at what they do. They had a really good plan.”

The damage by Fournette continued as he took the ball 78 yards on LSU’s first offensive play of the second half to break the 21-21 halftime tie. For most of the game Fournette was the lone workhorse of the LSU run game, but in the second half Derrius Guice began to carry his own weight. The sophomore ran for 57 yards and one touchdown on 16 carries. LSU finished the night with 354 yards, but at one point Fournette was outgaining his own team with 249 to LSU’s 244 rushing yards midway through the game.

“It’s very frustrating,” Ole Miss defensive coordinator Dave Wommack said. “Go out there and practice every day and try to do these things then we make little mistakes that turn into big mistakes when you play teams of this caliber. …I know (Fournette) is a great player. He came he wanted to do something special. We weren’t in the right place at times.”

For the third straight game the run defense and run fits have not been Ole Miss’ shining spot when re-watching the game film. LSU was another example of that glaring issue on defense and the task will stay at the same difficulty level when Ole Miss hosts Auburn next. On Saturday the Tigers ran for 543 yards in their 56-3 win over Arkansas. It was the most rushing yards by a team in a Southeastern Conference game. Ole Miss knows their homework is for the next six days.