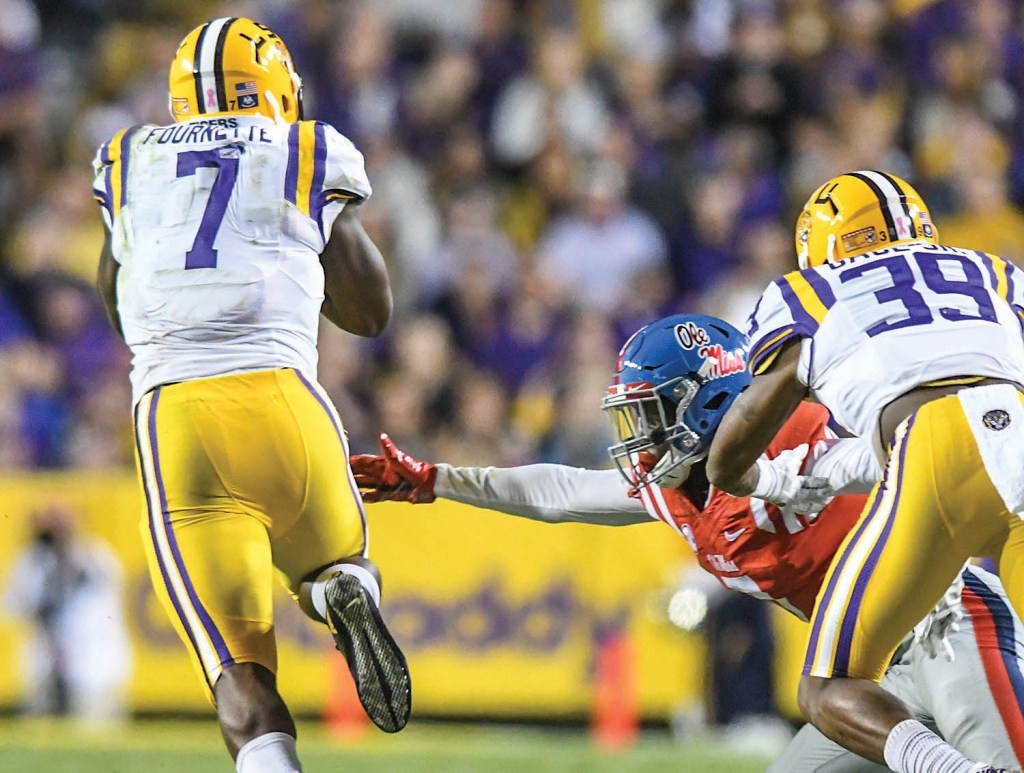 But LSU’s star running back spent the rest of the night running over, around and through the Rebels.

Fournette ran for a single-game school record 284 yards and three touchdowns, Ole Miss’ offense bogged down late, and the 23rd-ranked Rebels fell below .500 on the season with a 38-21 loss in front of 101,720 fans at Tiger Stadium late Saturday night.

A healthy and rested Fournette, playing for the first time in a month after suffering an ankle injury, averaged a whopping 17.8 yards on just 16 carries, breaking Alley Broussard’s record of 250 yards against Ole Miss in 2004. Projected to be a high pick in next year’s NFL Draft, Fournette feasted on the nation’s 104th-ranked run defense, accumulating 249 yards on his first seven carries with his touchdown runs covering 59, 76 and 78 yards — the latter giving No. 25 LSU (5-2, 3-1 Southeastern Conference) a 28-21 lead early in the third quarter that it didn’t relinquish.

“They checked to certain things against certain looks, and they’ve got really talented running backs that when they do get a crease, they make you pay,” Ole Miss coach Hugh Freeze said. “We fit some stuff wrong again and missed some tackles again, and then some of the credit goes to them, too.”

Ole Miss forced three turnovers but only scored seven points off of them. The Rebels went back and forth with LSU in the first half to play to a 21-all deadlock, but the SEC’s third-highest scoring offense had its first scoreless half in the final two quarters since a 38-10 loss to Florida last October.

Quarterback Chad Kelly finished 19 of 32 for a season-low 209 yards with a touchdown and two interceptions while leading the Rebels in rushing for the second straight week (56 yards) on a night when they ran for 116, their lowest output against a league opponent this season. With the Rebels once again forced to air it out, LSU amped up its pressure, sacking Kelly twice in the second half and holding Ole Miss to just 104 yards after halftime.

“We just didn’t execute,” Kelly said. “That’s what it comes down to.”

But Fournette ripped off a 59-yard touchdown run on LSU’s next possession and a 23-yarder to get the Tigers’ next drive going after Kelly was picked off by Donte Jackson at LSU’s 3-yard line. Ole Miss blew a coverage five plays later, leaving D.J. Chark wide open for a 40-yard touchdown catch that put LSU in front.

Fournette answered another Wunderlich field goal with a 76-yard score to push LSU’s lead to 21-13.

The Rebels’ defense forced two fumbles in the first half, the second one recovered by Jaylen Jones at LSU’s 9 after Marquis Haynes’ hit on Danny Etling. Ole Miss cashed in on Akeem Judd’s 2-yard touchdown run and drew even just before the half on Kelly’s two-point run after an LSU personal foul moved the attempt closer.

But the Rebels went three and out on their first three possessions of the second half, and it only got worse from there.

“We’ve got to really, really look at ourselves hard — coaches, players — and figure out why we’re not putting together complete games,” Freeze said. “Youth is no longer an (excuse) at certain places nor injuries. It’s time for us to grow up and be able to play a complete game in this difficult conference.”