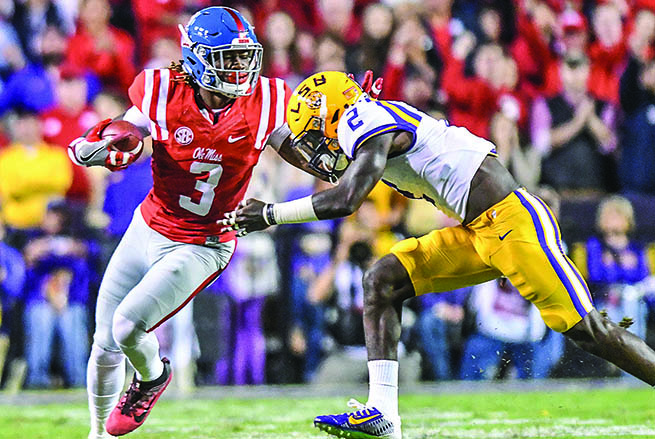 It’s been a while since Ole Miss has been in this position.

The Rebels are on a losing streak, something they haven’t experienced since 2014. But back-to-back losses to Arkansas and LSU have Ole Miss (3-4, 1-3 Southeastern Conference) entering Saturday’s matchup with No. 15 Auburn tied with the Razorbacks and Mississippi State for last place in the SEC West.

A season that began with a preseason top-15 ranking and titles hopes has quickly been reduced to a fight for bowl eligibility.

“We’re staring adversity right in the face, and it will test all of us,” Ole Miss coach Hugh Freeze said. “I saw some things (Saturday) I wasn’t crazy about in certain kids. We’re a family, and we’ve got to fight during the difficult times.”

Ole Miss’ issues are a mixture of old and new.

What’s been a consistently bad defense, particularly against the run, was the worst it’s been all season against LSU — the Rebels surrendered a school-record 284 rushing yards to Leonard Fournette and now rank 113th nationally in rush defense — but the offense hasn’t been without fault lately.

Ole Miss still owns the SEC’s second-highest scoring offense but has stalled in the second half the last two weeks. The Rebels were shut out in the third quarters against Arkansas and LSU and didn’t score in the fourth quarter against the Tigers either, the first time they’ve gone scoreless in a half since last year’s blowout loss to Florida.

“We’ve got to finish in the second half,” quarterback Chad Kelly said. “That’s the biggest thing, man.”

It won’t get any easier against Auburn (5-2, 3-1), which will bring the league’s top rushing offense to Vaught-Hemingway Stadium after setting an SEC single-game record with a whopping 543 rushing yards in a 56-3 rout of Arkansas.

From the upperclassmen on down, Kelly said the team has to quit blinking at the first sign of trouble.

Ole Miss’ 10-0 lead against LSU was gone early in the second quarter while a 20-point lead against Memphis was cut to six at one point. And there’s the 21- and 22-point leads the Rebels coughed up against Alabama and Florida State.

“We’ve just got keep the intensity up,” Kelly said. “We can’t hang our heads on a bad play and the next thing you know we’re down 10. We’ve just got to keep our heads up, keep on fighting and keep on bringing those guys up. We can’t look and say the game is over so quick.

“We’ve really got to understand that when times get tough, we’ve got to push even harder. That’s really the biggest thing right now I see in this team.”

Ole Miss still has trips to No. 9 Texas A&M and Vanderbilt looming next month before closing out the SEC slate with the Egg Bowl. The only way for the Rebels to deal with their hardship is to fight through it.

“Just throw (the LSU game) in the trash and move forward,” defensive end Marquis Haynes said. “We’ve got a big game next week against Auburn.”