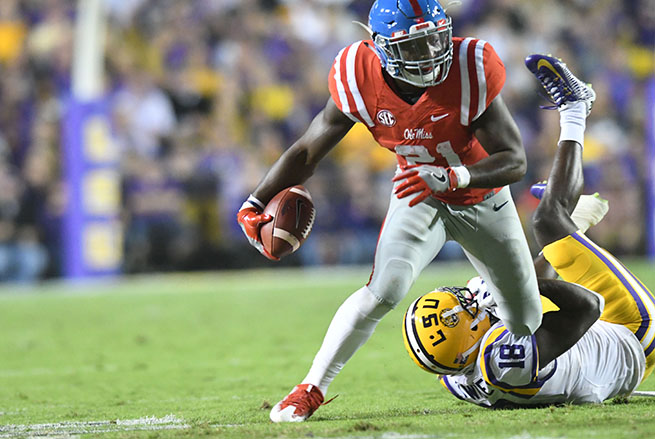 Ole Miss running back Akeem Judd (21) is tackled by LSU cornerback Tre’Davious White (18) at Tiger Stadium in Baton Rouge, La. on Saturday. The Rebel offense is feeling the need to press with the defense struggling to hold opponents. (Bruce Newman)

Even before he began to break it all down, Chad Kelly looked frustrated.

Standing behind the podium during his weekly meeting with the media Monday, Kelly rattled off a number of reasons he believes Ole Miss’ offense is being held back at times: lack of execution, mental focus, attention to detail, physical mistakes.

All of this from a quarterback who’s directing the Southeastern Conference’s second-highest scoring offense.

“I hate sitting up here saying we have to keep working hard, but that’s the name of the game,” Kelly said.

Ole Miss’ most pressing issues are on defense, which in turn is putting a lot of pressure on Kelly and company to keep up. The Rebels don’t rank any better than 70th nationally in run defense, pass defense, scoring defense or total defense with their ability to stop the run being the worst in the SEC (226.9 yards allowed per game).

Now Ole Miss (3-4, 1-3 SEC) has to deal with the league’s best rushing offense when No. 15 Auburn visits Vaught-Hemingway Stadium on Saturday (6:15 p.m., ESPN). The Tigers (5-2, 3-1) are running for nearly 303 yards a game after racking up an SEC single-game record 543 yards on the ground against Arkansas last week, meaning the Rebels will likely need to keep churning out a bunch of points to keep pace.

Only Alabama is scoring more points per game than Ole Miss among SEC teams while the Rebels have scored at least 30 points in all but one conference game, yet the Rebels have more losses than wins. Ole Miss is tops in the league in passing while Kelly is third in passing efficiency as he and his talented group of wideouts try to make up for the defensive deficiencies and a running game that’s next to last in the SEC (150 yards per game).

It’s put most of the responsibility on Kelly’s shoulders as the senior has accounted for 81 percent of the Rebels’ offense in all but two games this season and has led Ole Miss in rushing in back-to-back weeks. He’s had a hand in 18 (15 passing, 3 rushing) of the Rebels’ 30 offensive touchdowns, though Kelly isn’t passing blame.

Four of Kelly’s seven interceptions have come in the last three games as the pressure mounts to keep scoring.

“I think that’s a natural reaction to all of us,” Ole Miss coach Hugh Freeze said of Kelly pressing. “I sense that in myself, so I am certain Chad feels some of that also.”

Pressure or not, the offense hasn’t looked like its usual self in the latter stages of the Rebels’ back-to-back losses. Ole Miss was shut out in the third quarter against Arkansas and never scored in the second half last week against LSU as the Rebels posted a season-low 325 yards of offense in their most lopsided loss of the season.

“You’ve got to push through hard times,” Kelly said. “The third quarter’s hurting us. We play a good first half, but the second half we have to keep working hard. It comes down to execution.”

The Rebels know they’ll need a lot of it once again Saturday.

“It is a combination of things, but we can’t afford to have those three and outs for sure,” Freeze said.