Campaign signs are welcome, if they’re in the right location 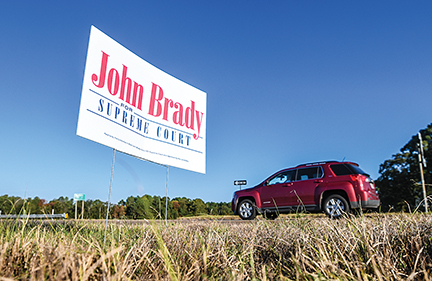 Bruce Newman A campaign sign is placed on Highway 30 in Oxford, today. Officials are reminding candidates and their supporters of the proper location for campaign signs in this election year.

With the presidential election around the corner, campaign signs have already popped up on lawns around Oxford and Lafayette County, showing homeowners’ support for their choice for of president, along with a few local elections.

As long as the signs are placed on private property, they are legally allowed to be there.

Signs placed on the grass between the sidewalk and the roads are in the city right-of-way.

Campaign signs fall under Oxford’s temporary sign ordinance that was passed in 2007 and updated earlier this year.

Signs can be no larger than 6 feet-by-4 feet in all designated historical preservation districts or in areas zoned residential. Temporary signs in all other zoned areas cannot exceed 32-square feet or 68 feet in height. Identical signs should not be placed closer than 50 feet from each other, according to Building Director Randy Barber.

If the signs are on the right-of-way, city crews may move them onto private property. However, if someone is obviously placing multiple signs in the right-of-way, they can be removed. If a candidate wishes to get those removed signs back, they have to pay a $50 fine.

Most signs are removed because they get in the way of city crews mowing the rights-of-way.

On the Square, political banners can only be hung for 15 days at a time, four times a year.

Signs or banners in commercial areas that have community messages like “Get Out and Vote,” are allowed without restriction. Those advertising or campaigning for a particular politician must follow the city’s sign ordinances.

While stealing campaign signs is generally a bigger problem during the presidential elections, Oxford Police Department Maj. Jeff McCutchen said stealing campaign signs is illegal and someone caught could face a misdemeanor charge or petty theft and possibly trespassing if while stealing the sign you go on private property. However, the theft must be witnessed by the property owner and reported to OPD.

“If they see someone stealing signs, give us a call,” McCutchen said. “We ask you don’t approach them or attempt to handle the situation without us.”

In Lafayette County, there are no laws about campaign signs, according to County Administrator Lisa Carwyle, as long as the signs are not on county property.

However, if signs are placed on local state highways, the Mississippi Department of Transportation will remove all signs, structures or other obstruction from the highways’ rights-of-way. The width of rights-of-way areas vary by location and includes the driving lanes, shoulders, mowed areas and potentially may reach distances of 300 feet or more from the center line of the driving lanes. Signs are not permitted within areas used for clear vision at intersections so they will not interfere with the sight distance of a driver. No signs are allowed in limited access rights-of-way. Typically, the right-of-way is larger near roadway intersections.

Signs removed by MDOT crews will be kept for two weeks at a local MDOT maintenance facility, and then discarded. Candidates may retrieve signs from MDOT without penalty.

Also on the ballot is a contested state race for Supreme Court Justice District 3 with John Brady, Bobby Chamberlin, Steve Crampton and James T. “Jim” Kitchens Jr. in the running.

The deadline to vote absentee in person is Saturday, Nov. 5 at the Lafayette County Circuit Clerk’s Office, which will be open from 8 a.m. to noon on Oct. 29 and Nov. 5. Absentee votes being mailed in must be received by Monday, Nov. 7.