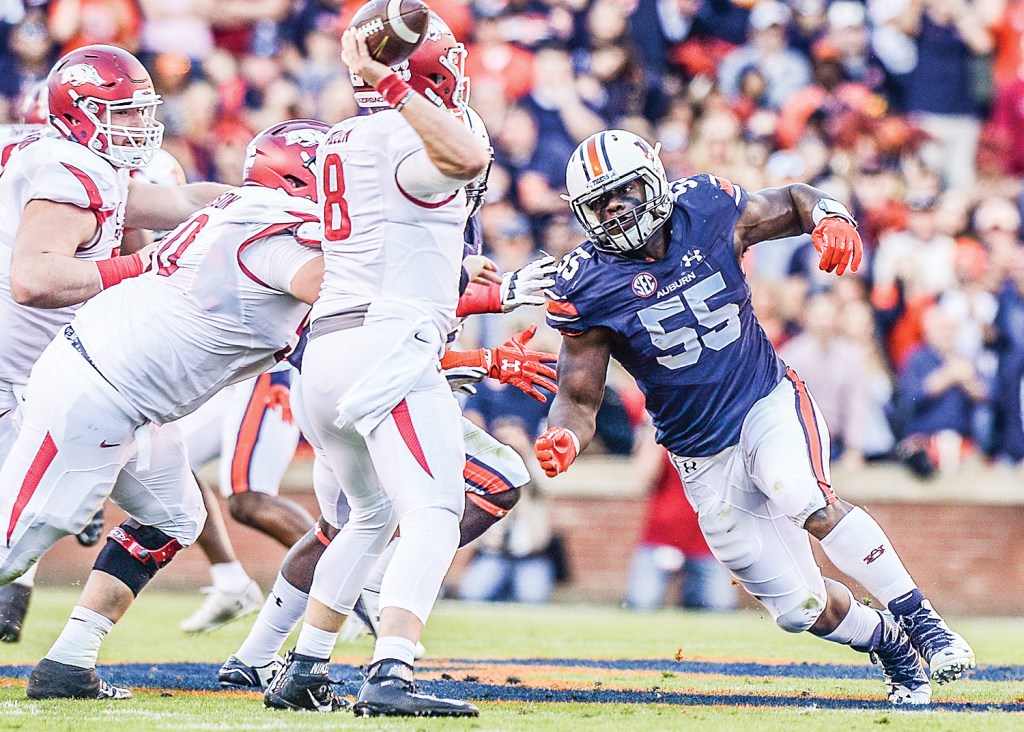 Auburn defensive end Carl Lawson (55) rushes Arkansas quarterback Austin Allen during the Tigers’ 56-3 win Saturday at Jordan-Hare Stadium in Auburn, Ala. Lawson and the rest of the Tigers’ defensive front are the the next challenge for Ole Miss’ banged-up offensive line. (Dakota Sumter/Auburn Athletics)

Gus Malzahn’s Auburn teams usually make their living on offense. Now the Tigers have the defense to go with it.

And Ole Miss is well aware of where Auburn’s newfound success on that side of the ball starts.

“Their front six just jump off the page at you,” Ole Miss coach Hugh Freeze said.

The Tigers’ defensive line has led a turnaround for a unit that didn’t rank better than 54th nationally in run defense, pass defense, total defense or scoring defense a season ago. With a talented front that can go eight or nine deep, No. 15 Auburn is in the top 30 in all those categories this year and will bring the nation’s No. 3 scoring defense into Saturday’s matchup (6:15 p.m., SEC Network) against Ole Miss.

“Only giving up 14 points a game is unheard of almost these days,” Freeze said.

A healthy Carl Lawson has been a terror off the edge for the Tigers (5-2, 3-1 Southeastern Conference) after missing most of the last two seasons with injuries, ranking second in the SEC with 6.5 sacks and eight tackles for loss, but Lawson’s got plenty of help around him.

Senior Montravius Adams, the reigning SEC Defensive Lineman of the Week, has three sacks, six tackles for loss and is second only to Lawson with 10 quarterback hurries from his tackle spot. True freshman Marlon Davidson has been too good to keep off the field, starting every game with 2.5 sacks, four tackles for loss and a forced fumble.

That depth has relegated other blue-chip prospects such as sophomore end Byron Cowart, ranked by some recruiting services as the nation’s top overall recruit coming out of high school a couple years back, to the second-team defense. Auburn’s 18 sacks are fifth-most in the SEC while the Tigers are yielding fewer than 129 yards a game on the ground.

League of its own?

Ole Miss (3-4, 1-3) has already gone up against Alabama and LSU, and players and coaches believe Auburn’s front is in the same class if not better.

“They’ve probably got three or four NFL guys and then some coming behind them that are young,” offensive line coach Matt Luke said. “Just very talented.”

Said guard Javon Patterson, “I think they’re the most talented we’ve seen this far with Carl Lawson and Adams. They do a great job of doing what they do.”

The group was dominant in Auburn’s 56-3 win over Arkansas, sacking Austin Allen four times and hurrying him 15 other times. The Tigers held the SEC’s leading rusher, Rawleigh Williams, to 22 yards and the Razorbacks to 25 rushing yards in all.

“Whether it is Lawson or Adams or their two backups, they are two-deep in every position and definitely an SEC talent,” Freeze said. “They are an elite defense, so whether you are zone blocking them or back schemes or pass protecting, it is an issue. It is one that you cannot afford to get behind the chains on.”

It will provide yet another challenge for an Ole Miss team that’s struggled to balance out its passing attack against some of the better teams on its schedule. The Rebels are next to last in the SEC in rushing and could be without two starters on the offensive line in left tackle Rod Taylor and guard Jordan Sims, who are both nursing high ankle sprains.

“Those guys are very athletic,” Patterson said. “We’ve got to be on our roles and do our jobs.”