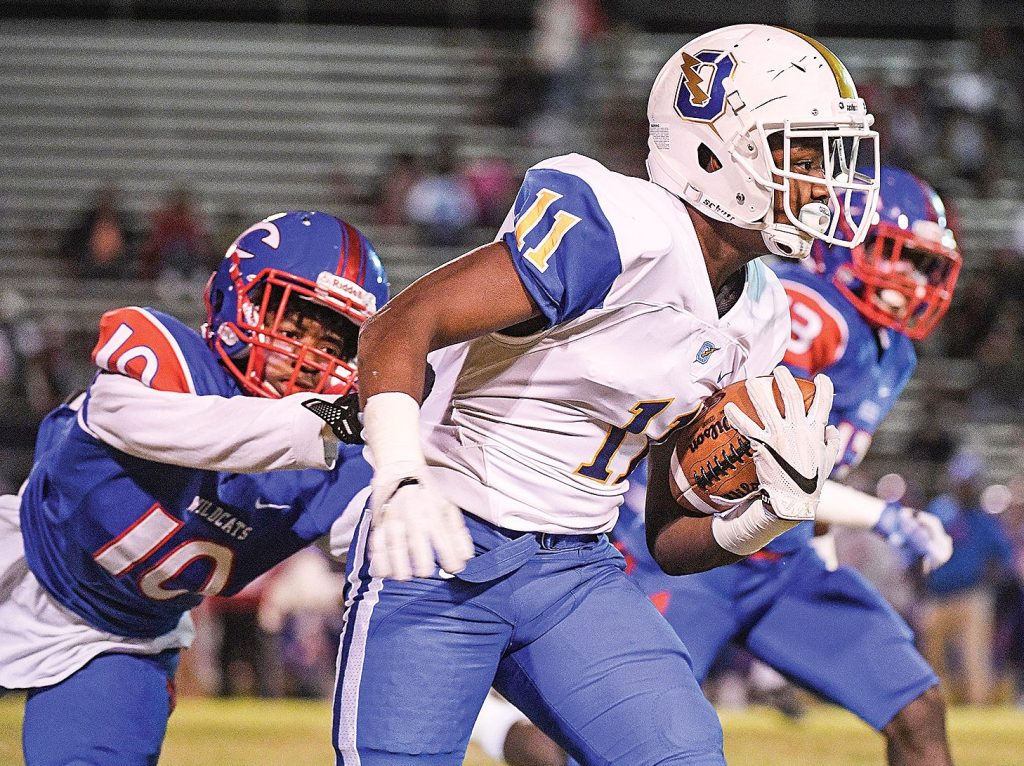 Wide receiver Dede Pegues (11) and the rest of the Chargers will carry a four-game winning streak into Friday’s game against Center Hill at Bobby Holcomb Field. (Thomas Graning)

Oxford is in the driver’s seat, not for the No. 1 seed in Region 1-5A, but for the chance to host a home playoff game. The Chargers are sitting tied for second with Lake Cormorant at 4-1 in the region standings and will face the Gators on the road next week in the regular-season finale.

But before Oxford (6-3) gets too far ahead of themselves, they cannot look past who they are hosting this week as Center Hill comes to Bobby Holcomb Field on Friday night (7 p.m., 95.5 FM).

“We’ve talked about how hosting a playoff game is a great goal,” Oxford coach Chris Cutcliffe said. “It’s a big deal and something that we want to work hard to accomplish. It started a few weeks ago with New Hope, and we knew we had teams that were right there with us in the standings on the schedule. We talked about how a playoff mentality had already started for us.”

The Chargers put themselves in the driver’s seat to finish no worse than second by creating some separation atop the standings, defeating Clarksdale 27-13 last week for their fourth straight victory. It was an offensive performance against a stout Clarksdale defense that was holding opponents to less than 10 points per game. It gave Cutcliffe confidence that his offense is peaking at the right point of the season.

“We have a lot of new faces on offense this year, so it’s going to take a little time to get everybody executing at the same time or at a high level,” Cutcliffe said. “All we have to do is be able to put it all together. … I think they are starting to kind of hit their stride a little bit.”

Oxford got an extra boost in the receiving corps as Jaquan Webb returned from a leg injury last week, catching a 41-yard touchdown pass.

Center Hill (2-7, 1-4 Region 1-5A) comes into the game riding a four-game losing streak with their most recent loss at the hands of Lake Cormorant last week. The Mustangs do not hide what their strengths are offensively. They run the ball and run the ball well with a triple-option offense. Oxford’s defense knows exactly what their game plan needs to be.

“They’ve had a lot of success running the football all season,” Cutcliffe said. “They even had a game where didn’t throw a pass and ran for over 380 yards. They’re very good at running the ball, and you have to play great assignment football if you’re going to defend the option.  We have to be sound fundamentally.”

The final home game of the regular season comes with the ceremony that is known as Senior Night. It is a special night for any coach and Cutcliffe is no exception, though for the first-year head coach, Friday night may come with a little bit more meaning.

“That’s the first group of seniors that I’ve been there as a head coach,” Cutcliffe said. “I’ve been with those guys a long time back to their spring practice of them heading into their ninth-grade year. I’ve watched them grow over the years, and I’m so proud of those guys and all they’ve accomplished.”