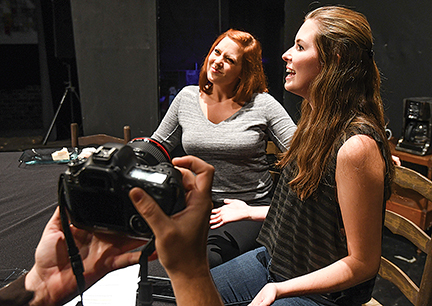 Ashley Fly, left, is Carla and Claire Sims is Bella as they rehearse for the play "B-Roll", which is part of Theatre Oxford's Ten Minute Play Festival.

Theatre Oxford will present the Ten Minute Play Festival this weekend at the Powerhouse Community Arts Center.  The performances tonight and Friday are at 7:30 p.m., and the Sunday performance is at 2 p.m.

The 2016 Festival will feature five short plays, including the LW Thomas Award winner “Whistler and His Mother,” and “One Cow Mooing,” the Audience Award Winner from Theatre Oxford’s National Ten Minute Play Contest.

The Ten Minute Play Festival includes a large cast of local talent and a committed group of directors to bring the plays to life.

Greg Earnest, one of the actors in “One Cow Mooing,” looks forward to the Festival every year because “it’s a great opportunity to be in a fun production with lots of Oxford actors and a great way to participate in local arts.”

Mary Knight, director of the short drama “Green Zone,” is a frequent director for Theatre Oxford and a big fan of the Ten Minute Play Festival.

“Ten-minute plays are a fun way to get involved in theater because you get lots of experience without being overwhelmed by the requirements of a huge production,” Knight said.

Tickets are $10 for Theatre Oxford members and students and $15 for non-members.

Tickets are available at http://www.brownpapertickets.com/event/2627646 or at the door.