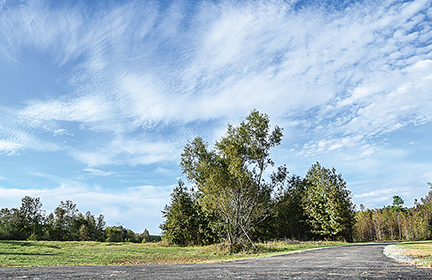 Bruce Newman Woodlawn Davis Nature Center is being constructed near the intersection of Anderson Road and West Oxford Loop. A ribbon cutting is set for Nov. 12.

After several years, the first phase of a new park in the Woodlawn neighborhood is almost complete and has been given an official name.

The Woodlawn Davis Nature Center is named after Jimmy Davis who donated the land during a land-swap arrangement when the city was rezoning the area in 2010.

A ribbon-cutting ceremony will be held on Nov. 12 to officially kick-off the opening of the park that is located on the corner of Anderson Road and West Oxford Loop.

During the ceremony, there will be activities throughout the afternoon including a bird watching tour, wonder walk and a kid’s fun run to help promote the newest city-owned park.

People are encouraged to bring chairs and blankets to stay to watch the North Taurid meteor shower that evening.

The event will begin with a welcome by Mayor Pat Patterson at 3 p.m. followed by an introduction of the new advisory board of the Woodlawn Davis Nature Center.

Mike Muraco, director of Strawberry Plains Audubon Center in Holly Springs, will be on hand how the Audubon Center will be involved in educational programming and partnership with the nature center.

The goal of the Woodlawn Davis Nature Center is to create a public park with educational programming which exhibits a series of biologically enriched native habitats; highlighting plant and animal species indigenous to this area focusing on conservation and sustainability.

“The Woodlawn Davis Nature Center will be a nice addition to promoting ecotourism in Oxford,” said Visit Oxford Director Mary Allyn Hedges. “Many visitors are looking for things to do outside and with the partnership with Audubon, that should also help drive additional visitor traffic to this new park.

“We’re excited to have the Woodlawn Davis Nature Center which will be beneficial to the local community and will be an asset in promoting outdoor recreation and ecotourism to visitors coming to Oxford,” she said.

Some future components of the park include meadowlands, a butterfly garden, native foodscape garden, an amphitheater and pavilion. It will also include an interconnected pathway system for easy navigation and physical exercise that will overlook Goose Creek.

The first phase of the park, which includes the walking path and parking, cost about $125,000. The Oxford Board of Aldermen put $40,000 into this year’s budget toward phase 2; however, the nature center is seeking sponsorships for many of the proposed features.

Donations go toward planting native wildflowers in raised flower beds at gathering places like the pavilion; planting native foodscape garden that planners hope to grow fruits and berries familiar to Mississippi, including muscadines, blueberries, blackberries and raspberries; and planting pecan, oak, mulberry and redbud trees to provide fruits and nuts.

Those interested in becoming a member of the Friends of the Park campaign, visit the nature center’s Go Fund Me page at www.gofundme.com/woodlawnpark or visit Woodlawn Davis Nature Center’s Facebook page.