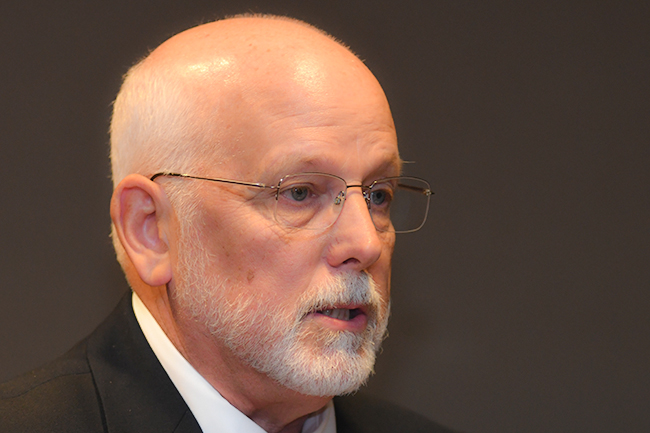 Bruce Newman MaxxSouth Regional General Manager Rick Ferrell was among those on hand for Thursday's announcement of new high-speed internet being rolled out in Oxford.

Oxford and Lafayette County residents will soon be surfing the web with unprecedented speed.

MaxxSouth Broadband joined elected officials in announcing Thursday afternoon that high-speed internet will be available to as many as 3,000 customers in Oxford, and over the next few years will expand their fiber-to-the-home installation to its entire service area in Lafayette County. Internet speeds are expected to be more than 20 times faster than the average current connection speed.

Customers who use the 1 Gigabit service can download a two-hour movie in less than 30 seconds, whereas currently it would take more than 30 minutes to download that same movie, according to MaxxSouth Regional General Manager Rick Ferrell.

“We’ve already completed and activated the Commons area adjacent to Oxford High School,” Ferrell said. “We expect to complete the initial build out in early 2017.

“It’s an incredible increase in speed,” Farrell added. “A fiber network can stimulate business activity and improve the quality of life. The future has changed so much for our industry and fiber has taken us to a totally new and different level.”

He said there are several factors involved in determining how long it will take to provide the service in areas MaxxSouth provides coverage.

“Every time we have to attach new poles or go underground, there are so many factors,” Ferrell said. “We just know that over the next few years we will get this complete.”

“It’s a network with unlimited possibilities. We’re proud to be rolling out technology and the future today.”

U.S. Senator Roger Wicker said the technology will impact the community and state in so many positive ways.

“This is going to make it easier for Ole Miss students and tie in with what the university is trying to do in becoming even more of a leader in technology,” Wicker (R-Miss.) said. “This is good news for small business. This means jobs. Not only for the big companies we all love, but the small start-ups. They need this type of fiber.”

“This improvement in internet service will be significant in the economic development of Oxford and Mississippi,” Canty said. “Citizens and businesses will benefit from having access to fast, reliable internet service.”

Supervisor Kevin Frye echoed that sentiment. Frye has been spearheading efforts to get fiber internet service to the area for more than a year.

His Connect LOU organization and accompanying website has the goal of increasing access to high-speed internet throughout Lafayette County.