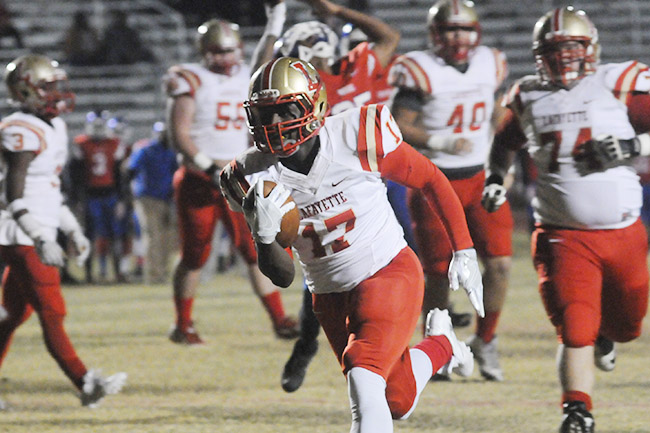 BYHALIA — When preparing his team this week leading up to their regular season finale against Byhaila, Lafayette head coach Michael Fair told his team they could either limp into next week’s MHSAA Class 4A playoffs or they could march in with confidence. What happened Friday night was a little of both.

It was not pretty for most of the game, but Lafayette defeated Byhalia 34-6 at Byhalia High School to give the Commodores a perfect 5-0 record in Region 2-4A and their eighth straight win. The No. 1 seed was wrapped up last week for Lafayette (8-2) when they defeated Senatobia, but Fair did not want to see his team rest on that success and play flat to close out the regular season.

It appeared that would not be an issue as the Commodore defense forced Byhalia (2-8, 0-5) to punt after an opening three-and-out, following that up with a four-play, 30-yard scoring drive of their own capped by a four yard run by Jamarcus Quarles for the quick 7-0 lead three minutes into the game.

The positive start continued the following Byhalia possession when the Commodores successfully blocked a punt with Quincey Twilley picking it up for a 15-yard scoop-and-score and a 14-0 lead.

The lead swelled to 21-0 for Lafayette less than 90 seconds into the second quarter but the Commodores’ play began to get sloppy and lackadaisical the rest of the half. Quarterback Will Ard fumbled a snap with the Indians recovering but the Commodore defense intercepted it to dodge a potential bullet. Later in the second quarter, Lafayette marched down the Byhalia 10 only to got backwards the next three plays and have a 45-yard field goal try by Robbie Langley blocked. To close out the half Quarles fumbled the ball at the Byahlia five-yard line, snuffing out another potential scoring chance for Lafayette.

“I thought that we played well at the start of the game,” Fair said. “We got up 21-0 really quick. Then I thought we shut it down for a quarter and a half. We can’t do that. We challenged our guys at halftime, to say the least.”

The halftime speech worked as Lafayette expanded on their 21-0 lead with a six-play drive that was fueled by running back Jamie Shaw, who scored on a three-yard run to make it 27-0 after Langley’s extra point try missed.

After another three-and-out stand by the Commodore defense, Shaw once again punctuated a drive, this time with an eight-yard run for a 34-0 lead midway through the third quarter.

“We knew it was in us,” Fair said of the second half start. “We just want to execute at a high level. If we don’t fumble the snap and then fumble in the red zone, we get that in the first half and then everybody is having a really good time at half time. But, for whatever reason we just didn’t that mentality of finishing like we need to.”

Byhalia avoided being shut out in the final game of the season at home and on Senior Night when junior Tyrico Richmond scored on three-yard run with a little more than three minutes remaining for the final margin.

It is a common philosophy amongst Mississippi high school football coaches. The non-region games are considered preseason, or a first season. Then comes your region schedule or the second season and finally the third season in the form of the playoffs.

Lafayette begins their third season on Friday as they will host the No. 4 seed out of Region 1-4A. The opponent was not known at press time.

“I’m excited about the opportunity that we have,” Fair said. “We’re going to have to play a lot better than we did (tonight). It’s a tournament and we played our way into the tournament. I’m excited about our guys and I would go as far to say we’ll different football team on Monday at practice.