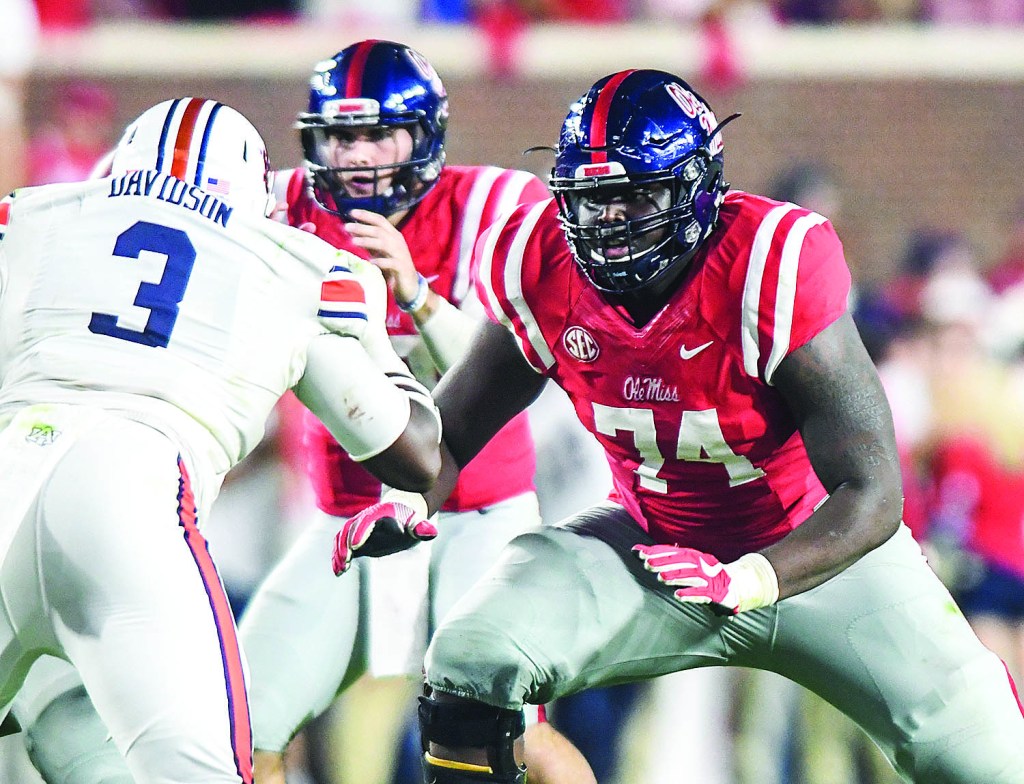 Ole Miss’ offensive line has taken a beating once again.

Injuries are staring to pile up with Rod Taylor sitting out Saturday’s game against Auburn and Jordan Sims playing sparingly. Both are dealing with high ankle sprains.

The effect to that cause was three offensive linemen got their first starts of their Ole Miss careers. Left tackle Greg Little, right guard Daronte Bouldin and right tackle Alex Givens all got the nod.

Little got his first start while the man’s whose shoes he is filling, former Ole Miss left tackle standout Laremy Tunsil, was standing on the Rebel sideline watching.

“I was really proud of those guys,” offensive coordinator Dan Warner said of the offensive line. “(Offensive line coach) Matt Luke had to piece together guys then we had a guy get banged up in the middle (of the game). We already had a couple guys short against, again, probably the best defensive line we’ve seen.”

Missing Taylor and Sims already, Ole Miss loss Sean Rawlings midway through the game. Rawlings would eventually return. The patchwork offensive front did their job for the most part, not giving up a sack to Chad Kelly or Jason Pellerin, when he was in spot plays.

“My line did a great job tonight blocking up front,” Kelly said.

It was an issue that was brought up after the LSU game and a week later finally has its conclusion.

Linebacker Tony Caldwell walked off the field before the game was over at Tiger Stadium after getting in front of a coach’s face. ESPN reported the incident and head coach Hugh Freeze mentioned on Monday the two were going to talk to discuss Caldwell’s future with the program. There may not be a future as it was announced during the game by Ole Miss’ media relations staff that Caldwell is suspended from the team indefinitely.

Freeze did not comment on it after the game.

It will be overshadowed by one play late in the game, but tight end Evan Engram had a night for the record books, literally. Engram had nine catches for 95 yards and a touchdown against Auburn. The touchdown helped Engram take sole possession of the school record for most touchdowns by a tight end with 13. The yardage gave Engram 700 yards for his career, eclipsing his own single-season school record for yards by a tight end (662 in 2014).

All that did not matter by the end of the night after Engram dropped what looked to be a sure-touchdown catch late in the fourth quarter that led to a 14-point swing.

“I’m thankful for my time here and for the things I’ve done,” Engram said after the game. “I wouldn’t have been able to do it without God and my teammates. My brothers, I’m just so thankful for them.”

Chad Kelly broke Archie Manning’s school record for passing yards in a game with 465 against Auburn. Manning’s record was 436 against Alabama in 1969. …Ole Miss has continued to not trail at halftime with their 22-20 lead over Auburn at the break on Saturday. …Saturday’s attendance was 65,927 for the second-largest in school history.