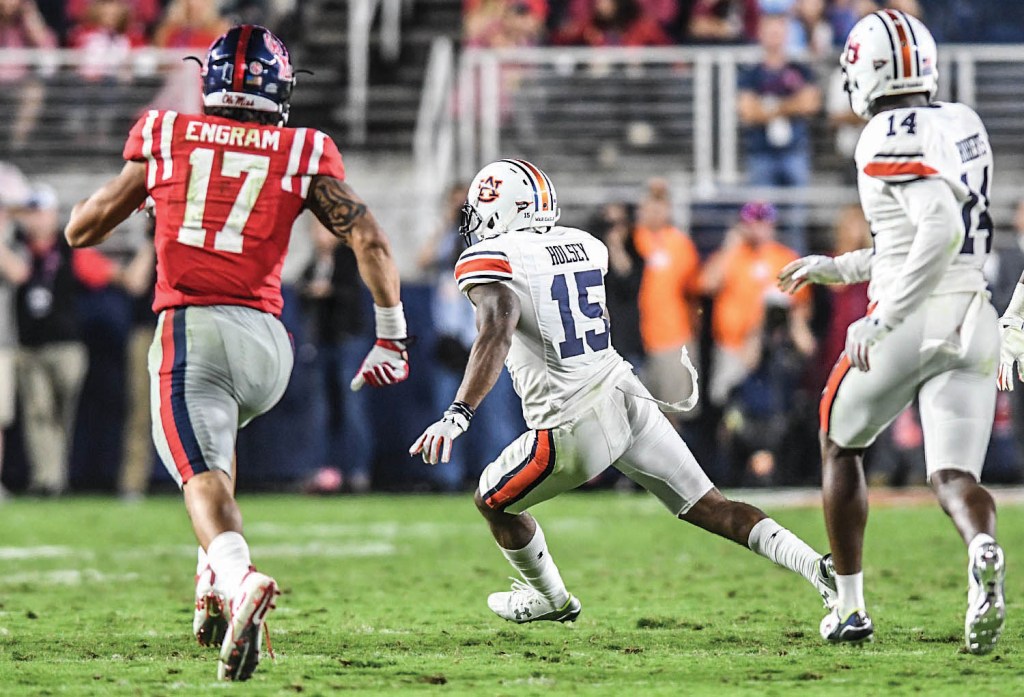 Ole Miss was in it. Right until the moment it wasn’t.

The Rebels returned home for the first time in nearly a month, and it was hard to tell you were watching a sub-.500 team. Ole Miss looked like it usually does in its home stadium, a place it had scored at least 38 points each time out heading into Saturday’s game against Auburn and a place where top-ranked Alabama had to score 48 points with the help of two defensive touchdowns just to survive.

Auburn had one of the Southeastern Conference’s best defenses with one of the nation’s best defensive lines, yet Chad Kelly made going up against the Tigers look like child’s play — a school-record 465 yards passing and three touchdowns with nearly 300 of those coming in the first half.

Kelly threw for 297 to be exact and two touchdowns in the first two quarters, yet Ole Miss needed a field goal from Gary Wunderlich before time ran out on the second quarter just to take a lead into the locker room because of a defense that continues to flounder. It didn’t help the best linebacker the Rebels have, DeMarquis Gates, wasn’t 100 percent after dealing with an injury all week in practice, head coach Hugh Freeze said, but let’s not pretend a full-speed Gates fixes all this defense’s problems.

Auburn was the next team to take its turn having its way on the ground. Kamryn Pettway went for 236 yards and averaged nearly 8 yards a carry, the second player in as many weeks to go for more than 200 rushing yards against this defense, to spearhead the Tigers’ 307-yard rushing effort.

Yet there the Rebels were going blow for blow with what Associated Press top 25 voters believe is the 15th-best team in the country and a team that annihilated Arkansas 56-3 the week before. Evan Engram, Quincy Adeboyejo, DaMarkus Lodge and the rest of Kelly’s weapons were catching balls all over the place with Auburn coming up with few answers.

Engram bounced back from his worst game statistically at LSU to catch nine passes for 95 yards, but it’s the one he didn’t come up with that will be remembered the most. Engram almost surely would’ve scored to put Ole Miss back up 35-33 when Kelly found him breaking wide open in the middle of Auburn’s secondary midway through the fourth quarter.

But Auburn kept its 33-29 lead when Engram couldn’t corral the pass, and Kelly threw his only interception right to Josh Holsey on the next snap. It was all Auburn needed to build a lead that was too much for Ole Miss to overcome on Kerryon Johnson’s final touchdown run three plays later.

On a night when Kelly and his receivers were nearly perfect in spearheading the Rebels’ 570-yard offensive output, it once again wasn’t enough.

This defense has consistently regressed since being the nation’s toughest to score on two years ago. It’s painfully obvious Ole Miss has to address most of its issues in recruiting as the Rebels’ talent level on that side of the ball isn’t up to par with the heavyweights in the SEC, but Freeze may also have some decisions to make with his defensive staff as the players are on the roster seem to be regressing fundamentally as well.

But that’s in the future.

Some of Freeze’s past teams might’ve been able to overcome having to settle for three points too many times rather than six or not getting any points at all when Jason Pellerin was stuffed on fourth-and-1 at Auburn’s 3 early in the third quarter. Maybe they could’ve overcome an uncharacteristic drop by one of their most sure-handed receivers or their quarterback’s lone mistake.

But this year’s team has too many flaws not to be flawless when it counts, and its latest loss showed why.